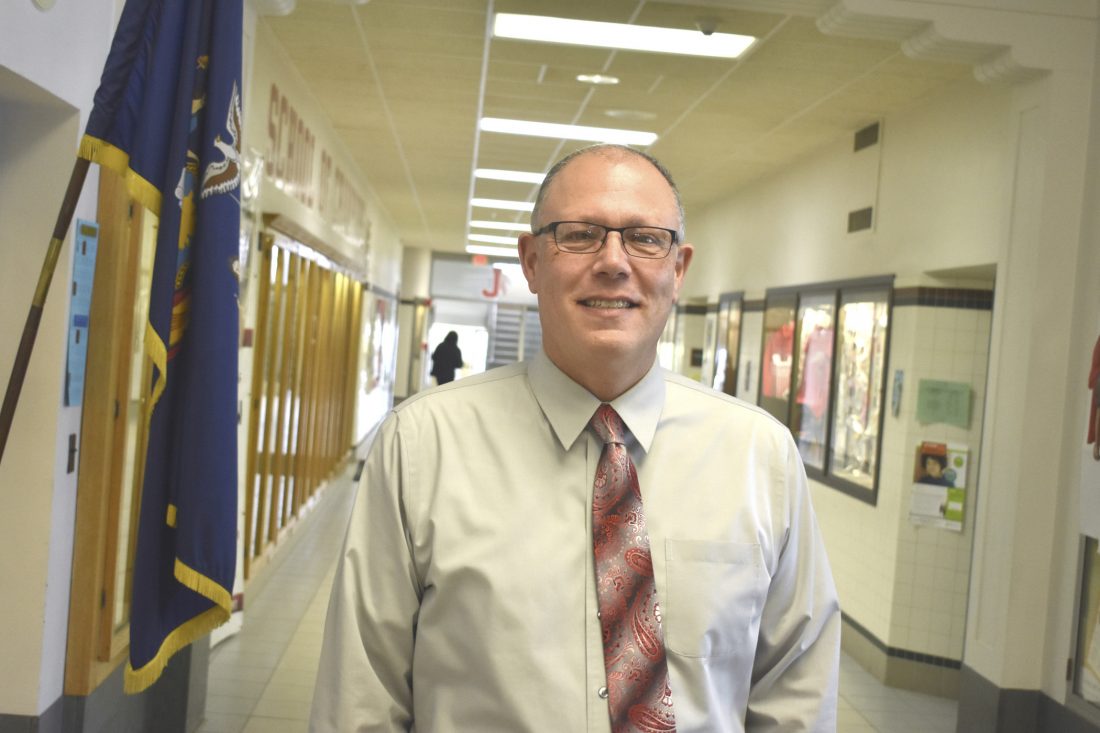 Dana Williams, Jamestown High School interim principal, was appointed to his new role in December. "I noticed a kind of a change in just the whole aura of the building. I think people are just happier and I feel that I'm going to support them." P-J photo by Jordan W. Patterson

Dana Williams, Jamestown High School interim principal, hopes the climate of the high school will be in a better place at the end of the school year and has already seen a shift in energy.

“I noticed a kind of a change in just the whole aura of the building. I think people are just happier and I feel that I’m going to support them,” Williams told The Post-Journal inside his office during a recent interview. “We’re here for the same goal, and that’s just to do what’s best for kids. You have to have that camaraderie to some extent. You have to have everybody mesh well together. That starts at the top and goes all the way down to every single person of this building — every aspect of it. That’s got to be my focus. I really want them to feel, because it’s the truth, that they’re all vital to what we do. Every single one of them.”

Williams, who has spent more than a decade in the Jamestown Public Schools District, was appointed to his new role in December. For Williams, the decision to finish the 2019-20 school year as interim principal was an easy one despite jumping into a “tough situation.” Williams’ predecessor, Dr. Rosemary Bradley, resigned in December after incidents the month prior that culminated with unions at the high school holding a vote of no confidence.

“The stuff that happened at the beginning of the year, it’s just unfortunate. It is what it is,” Williams said. “Things kind of went the way they did, but now we’ve got to move on. That’s my whole focus. Right now, my position is through the end of June and in that time I want the kids here to have a good year.”

While he said numerous times his focus for the remaining months of the school year is on student experience and student safety, he added that he wants the teachers to enjoy coming to work as well. Williams hopes improving the atmosphere will lead to improvements on a larger scale.

“There’s a lot of things that all schools everywhere, not just in Jamestown, want to improve,” he said. “We’re no different, but you have the best chance of improving if the people really like coming to work, if they like what they’re doing.”

Williams graduated from the Southwestern Central School District in 1979 and has lived in the Jamestown area for much of his life, which he believes adds to his legitimacy of being the leader of the city’s high school. Additionally, Williams has served as an assistant principal at JPS for 11 years at various times at Jefferson Middle School and at JHS. Most recently, he has been serving as an assistance principal at the high school for the last three years.

“I think it helps if the person in charge knows the area, knows the people in town and knows the students,” Williams said. “That’s something you can’t replace, and knowing the people here — the great staff we have.”

Additionally, Williams has two daughters who graduated from JHS, which he believes is additional evidence he believes in the district. He also spent much time here working at his father’s business, Williams Fabricating on Steele Street, growing up.

“I think it’s important,” he reiterated of having lived in the area.

“We’ve got a lot of pieces in here that are exactly what we need to be successful,” he said.

Before JHS, Williams earned an associate degree from Jamestown Community College before receiving a bachelor’s degree in communications from SUNY Brockport. Eventually, Williams switched career paths moving toward education. He received a master’s degree in education from St. Bonaventure University and later earned certifications in counseling and administration.

Williams also didn’t rule out throwing his name in for consideration when the district conducts its search for the next principal. However, he noted he wasn’t completely certain on his decision and added that his success this year will play a role.

“I’m assuming that the district will have an interview process and get candidates just like always. At that point, if I choose I’ll probably be one of those applicants,” he said. “At the very least, I got a great chance to give them a trial run to see if I can do that.”

For the first 15 years of his education career, he served as a school counselor at the Randolph Academy Union Free School District. However, going on his 26th year in education, Williams is faced with a new beginning, one that he didn’t hesitate to initiate.

“I’m taking it as it goes. I’m just happy,” he said. “I feel very fortunate to be doing what I’m doing right now and stepping into this and hopefully I can provide stability in kind of strange year so far.”

When it was officially announced by the Jamestown Public Schools Board of Education that Williams would become the interim principal, he held a staff meeting at the end of the day to let them know he was more than happy to “step up.”

“I really do feel good the way things have started,” he said.