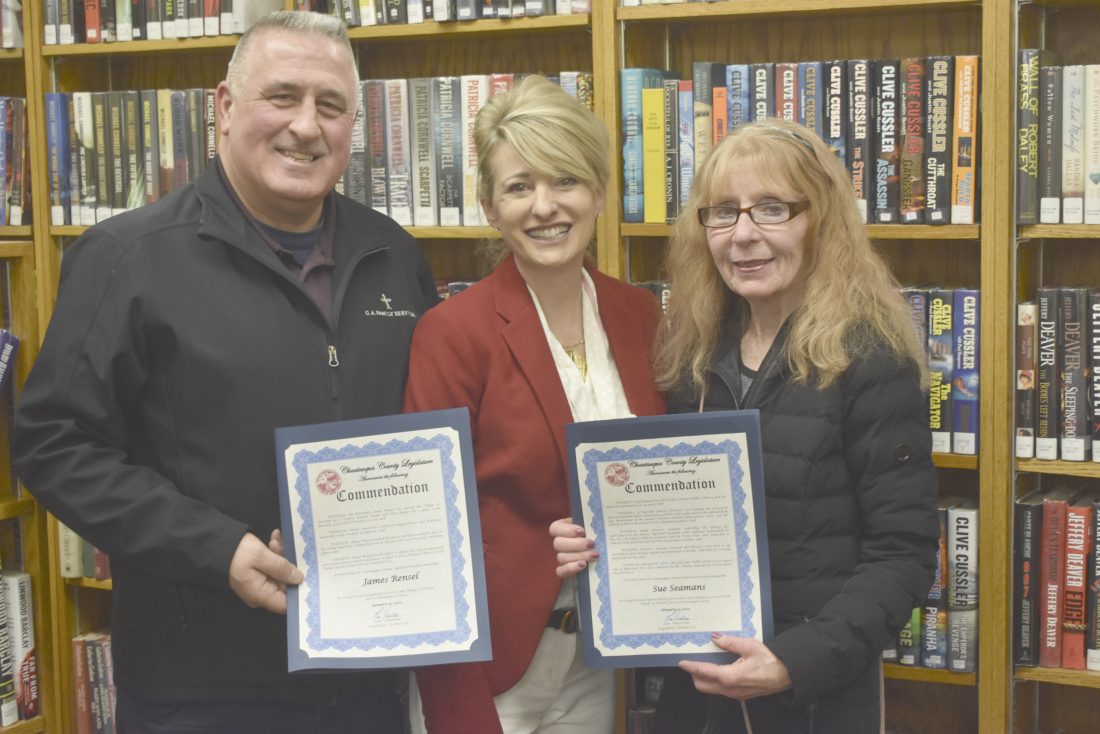 FALCONER — While no longer serving the village of Falconer in an official role, former Mayor James Rensel and former Falconer Public Library Director Sue Seamans were honored by the Chautauqua County Legislature.

Rensel and Seamans received commendations on behalf of the county that were presented by County Legislator Lisa Vanstrom at Monday’s Falconer Village Board meeting.

“Tonight I have a very special commendation on behalf of the Chautauqua County Legislature to honor somebody who has been tireless in her efforts to serve this beautiful village,” Vanstrom said of Seamans.

Seamans served as the public library director for 44 years until her retirement last year. Vanstrom cited her efforts with the annual book sale, the Falconer summer band series, the annual National Endowment for the Arts Big Read event, the transition to an automated card system and the development of a braille collection for the visually impaired as examples of her work over her career. The Falconer Public Library was named one of America’s five star libraries by the Library Journal for 11 years under Seamans’ leadership.

“Therefore be it known that the Chautauqua County Legislature hereby commends Sue Seamans in recognition and appreciation of her tireless and exemplary service to the village of Falconer and to Chautauqua County,” Vanstrom said.

Seamans was unaware she would be receiving the honor as she was told to attend for other reasons. After Vanstrom provided the physical copy of the county’s commendation to Seamans, the former library director addressed the board and the public.

“This is my home,” Seamans said. “When I came here, people were great. … My parents both died shortly after that and everybody in the village welcomed me. I got to know the people and as we went along we had a great group of people that believed in a vision. And they believed that Falconer was capable fulfilling that vision which was a grassroots library that could become national.”

Just as Seamans did not know of the county’s commendation, Rensel was left in the dark too. He was told to attend the meeting to help honor Seamans and was not aware he’d be receiving similar recognition.

“You got me again,” he joked about getting him in attendance.

Vanstrom cited Rensel’s work as a trustee, deputy mayor and mayor for five years as reasons for his commendation. He served from January 2015 through December 2019.

“Where as Mayor Rensel has exhibited compassionate and dedicated leadership for residents of Falconer,” Vanstrom said.

She specifically referenced his efforts in the post fire recovery after two fires devastated the village in 2017 and his opposition to the city of Jamestown’s efforts to annex property within the village.

In response to his commendation, he thanked the fire department for their efforts in extinguishing the two massive fires two years ago.

“I just happened to be a beneficiary of the great work the fire fighters did,” Rensel said.

He also praised Seamans and her efforts for the village while offering Falconer Mayor James Jaroszynski advice.