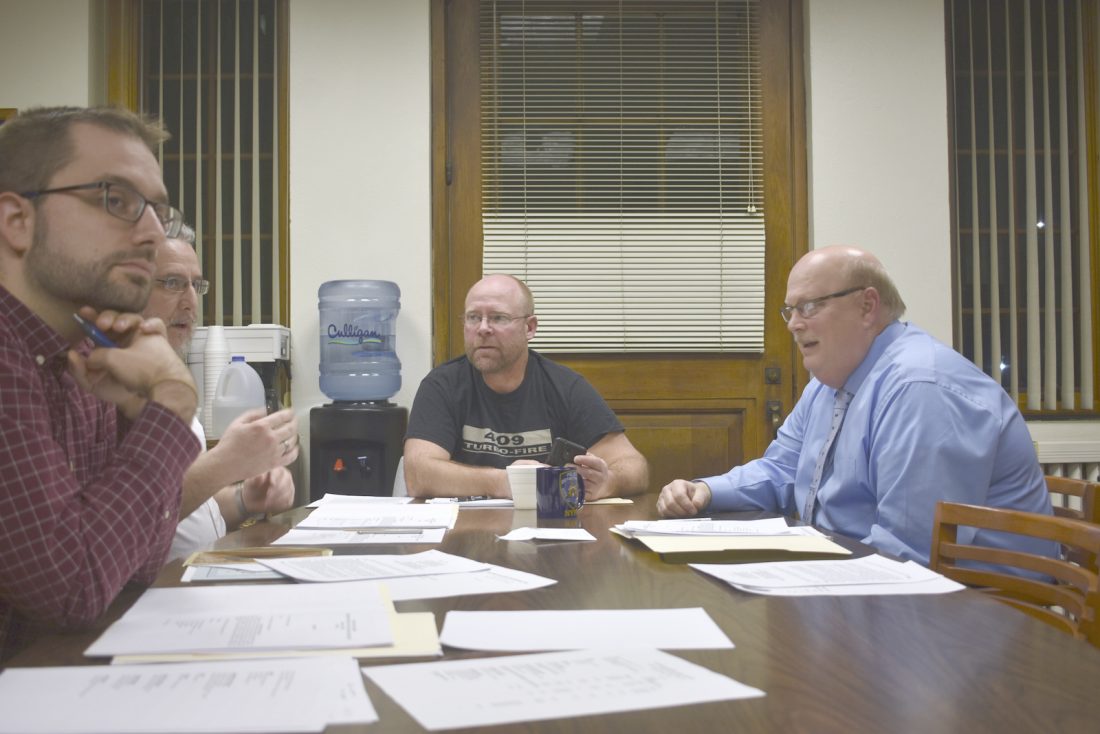 The Falconer Village Board addressed the recent Truck-Lite announcement, ongoing annexation proceedings with the city of Jamestown, its own fire department elections and a board vacancy. The meeting served as Mayor James Jaroszynski's first in the role. P-J photo by Jordan W. Patterson

FALCONER — In his first meeting as the village of Falconer mayor, James Jaroszynski had many topics to cover.

Included in Monday’s Falconer Village Board meeting and a preceding board work session was discussion regarding Truck-Lite, annexation, the Falconer Volunteer Fire Department and a board vacancy.

Jaroszynski addressed trustees at the board work session indicating that he wants to continue on where former Mayor James Rensel left the village. He praised the efforts of the previous team and believes the new administration can be successful while acknowledging areas of concern in the village.

“We definitely have some challenges ahead of us,” Jaroszynski said. “It’s not a secret the annexation issue. We’re also negotiating our water with BPU (Board of Public Utilities), and with the recent news of Truck-Lite. … We definitely have a lot on our plate to deal with and to think about.”

As for Truck-Lite, village trustee Timothy Dunn, who is also an employee at the company, said he was “disappointed.”

The company, that has had a longtime manufacturing facility in the village of Falconer, announced tentative plans to cease production at its local plant. But Dunn said the plans to close the facility are not definitive. Truck-Lite is a manufacturer of heavy-duty and off road lighting.

“I’ve worked at Truck-Lite for 15 years. I like working there. I have family members that work on the floor. I’m disappointed to hear that this is what they’re tentatively planning,” Dunn said. “I like to hang my hat on the word tentative because they have to go through a lot of negotiations. It is a union shop so the union has the right to negotiate to try and change things to keep the jobs here. It is not in stone. It’s tentative.”

Dunn added that his understanding of the situation is that the local corporate office located next to the plant that handles accounting, customer service, purchasing and engineering, among other duties, will not be impacted by the recent tentative closure announcement.

The city of Jamestown began a second attempt to annex the city Board of Public Utilities Dow Street Substation located in the village in 2019. Falconer officials have maintained their opposition to the city’s efforts.

Jaroszynski and trustees agreed that they would prefer a mutual agreement in some form rather than go through another litigation process. The mayor said a meeting took place with himself, Jamestown Mayor Eddie Sundquist, state Sen. George Borrello, R-Sunset Bay, and County Executive PJ Wendel to begin conversations regarding the issue. A second meeting has been scheduled to continue talks.

“I have not had anybody say they are for this and that they wish for the municipalities to get together and try and work this out. That’s what we’re going to try to do,” Jaroszynski said about what local residents are telling him.

Additionally, the board approved Jamestown as the lead agency in the State Environmental Quality Review Act (SEQRA) process attached to a potential annexation during the regular meeting.

After tabling election nominations for the Falconer Volunteer Fire Department at its last meeting, the board approved fire chief appointments going forward.

The board raised questions about former Fire Chief Charles Piazza’s residency being an estimated 20 minute drive or 12 miles from the village’s district. After a meeting with Piazza and Jaroszynski and other village officials took place, Piazza resigned as fire chief but has remained on as a member of the fire department.

After Jan. 30, Jaroszynski hopes to appoint a new board member. Phil Ribaudo, a write-in candidate, was voted by Falconer residents as the newest member of the board of trustees in the November election, but he has since notified the village that he will not be taking the position.

Jaroszynski told trustees that the village has to wait until Jan. 30 to fill the position as elected officials have 30 days after Jan. 1 to be sworn into office. The mayor said Falconer will be seeking interest in the community to fill the position. He noted that some people have already come forward expressing interest in becoming a board member. Jaroszynski said the mayor is allowed to appoint a replacement after interviews have been conducted following the 30-day period.

“Hopefully by the February meeting we will have a fourth person here sitting,” he said.