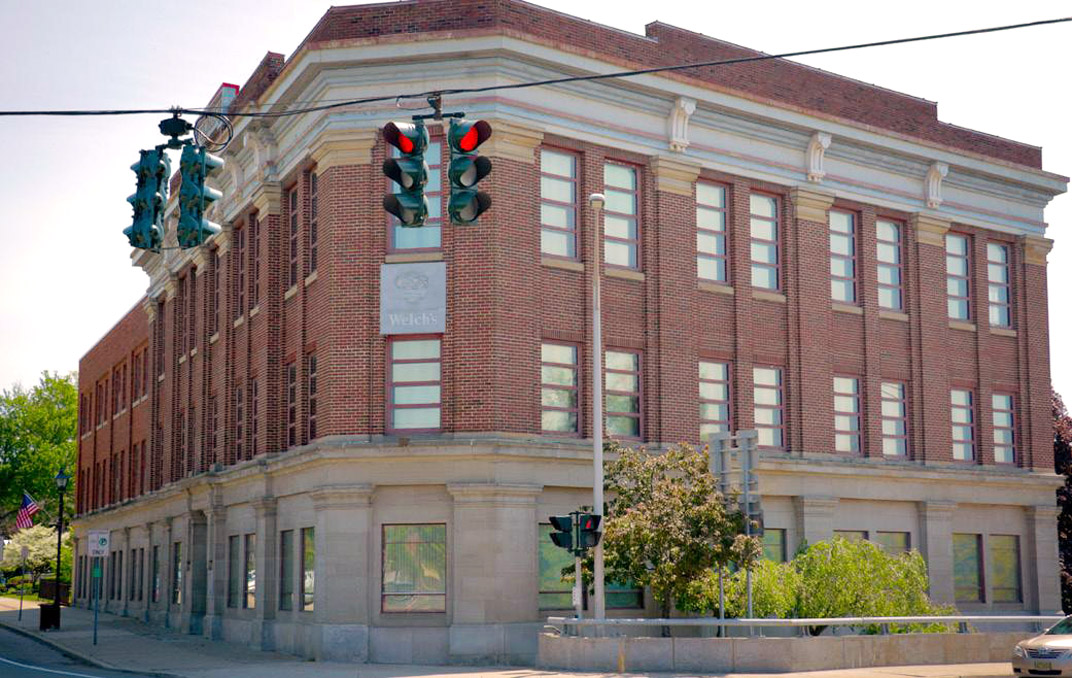 The Welch’s Building is pictured on Portage Street in Westfield. The town board approved the sale of the property to a Buffalo developer. P-J file photo

WESTFIELD — A historic building nearly 120 years old and previously the headquarters to Welch’s Foods could see new development in the near future.

The Westfield Town Board on Wednesday approved a resolution authorizing the sale of the 48,000-square-foot Welch’s Building, 2 Portage St. in the village, to Landmark Development Consortium LLC of Buffalo for $350,000.

The town purchased the property in 2014, and with it 14 total acres of land, in an attempt to preserve the building once considered the cornerstone of the Westfield business district. The move was recently criticized in an audit by the New York State Comptroller’s Office.

Town Supervisor Martha Bills said officials are excited the property could see new use after largely sitting vacant for many years. The town purchased the property and nearby land for $355,000 with hopes of preserving its history.

Bills referenced the Portage Inn, an iconic century-old warehouse-turned-hotel along Portage Street, that was demolished in December 2015 after sitting vacant and falling into disrepair.

“The opportunity came up for us to save the building,” Bills told The Post-Journal of the Welch’s property, constructed in 1910 and used as the company’s headquarters until the mid-1980s. “We determined that the cost of demolishing the building was more than what we paid for. … We were trying to be proactive and we were hoping to prevent what happened (with the Portage Inn).”

The town had been attempting to sell the building for a couple of years when the board approved the sale.

In an audit released two weeks ago, the state Comptroller’s Office questioned the town’s purchase of the Welch’s Building for $355,000 despite an estimated market value at the time of $243,000.

“The board and supervisor told us that although they had concerns about becoming a landlord of a large office building, they wanted to ensure the property would be sold to a buyer who would be committed to maintaining and redeveloping it,” the audit states. “In addition, an abandoned historic building in the town/village was recently demolished and they did not want that to happen to this property.”

As part of the audit, the Comptroller’s Office issued several recommendations for the town. They include using a thorough process when purchasing property to ensure the best price is obtained; obtain one or more independent appraisals on property the town plans to buy; and review long-term financial impacts before making a decision.

Town officials have disagreed with the audit’s findings. In a letter dated Sept. 12 and sent to the comptroller, Bills noted that the town worked with a committee established through the Westfield Development Corp. to analyze the purchase.

“The committee included a real estate appraiser, certified public accountant, real estate attorney and other long-time professionals in Westfield, all of whom were familiar with the building and the Westfield real estate market in general,” the letter to the comptroller states. “They knew that the $200,000 assessed value for the building was an artificially low number, reached at the conclusion of lengthy litigation as a compromise in order to maintain higher assessments at the Welch plant.”

Bills said rent received from the tenants over the last five years has paid for the purchase and netted the town a surplus of $125,000. In fact, she said the final payment on the loan will be made this month.

The town said it has also leveraged its ownership of the building to accomplish the following:

¯ obtained a grant in collaboration with the county and village “for the regrettable but necessary” demolition of the Portage Inn.; and

¯ obtained a $1 million grant from Empire State Development earmarked for building development with its new owner.

Noted in the resolution passed Wednesday is that Landmark Development plans to spend $5 million to renovate the building and convert it into a mixed-use facility. Bills said the development would include commercial and retail space with apartments in the upper floors.

“This will keep Welch’s in Westfield,” said Mark Geise, Chautauqua County Industrial Development Agency CEO. “They have been looking at other buildings to purchase or land where they could build. They had a number of options.”