Randolph Nonagenarian Is Thankful For Family And Friends 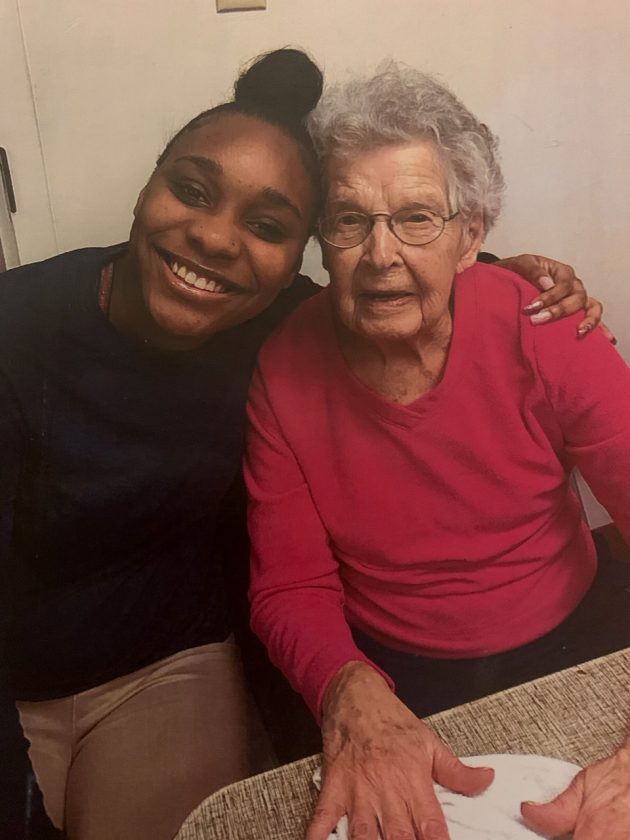 Ninety-four-year old Leona Smith is legally blind due to macular degeneration, but she does not despair. She is thankful for all she has and all she has had the opportunity to do and continues to do.

She was born into the Horton Family at their home on Spring Street in East Randolph on May 15, 1925, the fourth of six children. She had three sisters and two brothers. Her father worked for Randolph Furniture Company where he set mirrors. He lost the job during The Great Depression.

Her father had a garden, fruit trees, raspberry bushes, some pigs, a cow and a horse. Her mother canned the fruit and vegetables that her father harvested.

“We ate well. Mother sewed and made over (their clothes),” she shared. “We were poor, but we didn’t know it because everybody was the same, more or less.”

Her father made rugs from rags and when a young Smith wanted to try to do the same, he whittled a set of crochet hooks for her from wood.

“My dad used to cut our hair. He did everything. He repaired our shoes. It was great,” she continued. “Mom and Dad worked hard raising a family. I often wonder how they did it.”

She attended first and second grades in the building that is now The Old Tool Tavern in East Randolph. She moved to the new school on the hill after it was completed. All grades were held there, but the elementary children who lived in town went to the School Street school.

She referred to the older folks on her street who were very kind and did special things for her. Mrs. Hale taught her to crochet and she still has a baby tears plant that came from the one Hale gave her for a wedding gift.

Eventually the original plant died but Smith has been able to get pieces from those she had shared with.

The young girl stopped at Mrs. Boswell’s house on her way home from Sunday School. Her friend would read aloud the Sunday School paper Smith had brought with her.

“Mrs. Boswell was special. She had no children. I liked to go there. She had a pitcher pump at the sink, a Victrola that I could wind it up and a rocker with a stool that pulled out. She let me play with all of it.”

The kind woman gave her a doll quilt she had made from tiny blocks of fabric.

“I cherished that. I hated to part with it but eventually gave it to a great-granddaughter,” said Smith.

She took three years of Latin and two years of French while in high school and majored in home economics, but took a few business courses as well. She graduated high school in 1942 at the age of 17, but returned for a year of post-graduate classes with six other students.

After she left school, she took a job at Crescent Tool Company in industrial relations. She met Horton “Dutch” Smith after she had joined grange, a social group where she enjoyed the company of about 12 other friends. She married Horton April 12, 1945 in the East Randolph Methodist Church, where her cousin performed the ceremony.

“All through the service he called Dutch “Norton” instead of Horton,” she chuckled. He was named after his uncle and it was a coincidence that he had the same first name as his bride’s maiden name.

Horton was stationed with the Navy in California near the Mexican border.

“We were in love and he kept teasing for me to come out. Even though I liked my job and I was only 20, I got on a train in Randolph and went out in the fall of ’45,” she said. “Dutch never left the states. He always said the biggest ship he was on was the Oakland Ferry.”

The sailor was discharged in January 1946, but the couple decided to stay in California where he took a job on a ranch where a house was provided. By May they had decided to load up their ’37 Plymouth Coupe and travel back to New York.

“We loaded our worldly possessions and the trunk I had taken out on the train. Dutch had bought me a sewing machine and I wanted to take it so he took it apart,” she said.

The couple made the decision to drive during the cooler hours of night, due to repeated blowouts of their overheated retread tires. As they traveled closer to home, they found motel owners were unwilling to rent rooms.

They stayed with his parents on their return and to this day, the daughter-in-law can’t say enough good about her husband’s mother. They bought a 100-acre farm on Randolph’s Larkin Street where they were surprised to find the house was supplied by water by way of a pitcher pump in a back shed, but the barn had an electric pump. Her husband remedied the situation when he dug a ditch and ran a water line to the house. Their belongings were moved from one house to the other on a hay wagon.

The couple had a system in place while they were raising their sons. Her husband would take two boys to the barn and she would keep two with her in the house, rotating each week.

“We loved to square dance. We did the old-fashioned square dancing, then we joined the Circling Squares, a western square dancing group, which we loved,” she reminisced. “We made wonderful friends.”

She was a stay at home farmwife until 1967 or 1968 when the principal of the local elementary school asked her to be a lunch monitor for a couple of hours each day, which she did for four years.

“We had so much fun in the lunch room with the kids,” she said.

After 30 years, in 1976 they sold the farm to their son Roy and his wife Conney and moved to a brand-new smaller home.

She later worked part-time at a bank and at the library, where she had volunteered prior.

“I loved the library because I love reading. I call this my lifeline,” she said as she pointed to her reading machine, which magnifies print.

Although she has purchased all of the three reading machines she has owned, she sings the praises of Chautauqua Blind Association who she recommends to anyone with low vision. She uses her talking book machine for pleasure and would be lost without it.

Smith attended a fashion show put on by the cosmetology class at the Randolph Academy. She was given an invitation by Susan Jackson, the class’ teacher, who had hoped the elderly woman could surprise Bri, a female participant with whom she had formed a relationship.

The student was surprised and touched that her friend had arranged to be at the event.

Their friendship started on a day the teacher had taken a few students to the Randolph Manor, where Smith has been a resident since April 2018, to pamper the ladies with manicures.

“Bri chose her,” said the teacher.

The high school senior mentioned her own upcoming birthday while she was working on the manicure. The newfound friend invited the teen to go to her room to choose a cloth handkerchief from an assortment she had on hand for gift-giving.

“It was a special connection,” the teacher added. “Bri is always begging ‘when can I go see my grandma.’ It’s so unlikely that this country bumpkin and this city slicker from Manhattan would hit it off.”

“We just clicked,” said the elderly woman who has since given her young friend a Bible. “She comes back to see me when Susan can bring her. She showed up at Valentine’s Day with a bag of peanut butter cookies she had baked, flowers and a card because she loves me.”

The young woman also surprised her friend with an ice cream cone on a warm summer day.

“It’s touched my life so, it chokes me up,” said Smith.

Horton passed away in 1994 after 49 years of marriage.

Jean Ormond, who also lives in Randolph and attends the same church, is her only surviving sibling. Her children are scattered on the east coast, with Gary living in Georgia, Stephen in Geneseo, Roy in Randolph, Clair in New Hampshire and Dean in Tully. Smith has 11 grandchildren and 13 great-grandchildren that complete the family.

“I had five healthy, good sons. I’m so blessed with family and good friends. I can’t say enough good about the Randolph Manor, it’s staff, Steve and Dave, the owners. Everyone is so nice,” she said. “I’ve had quite a life. I am so thankful.”