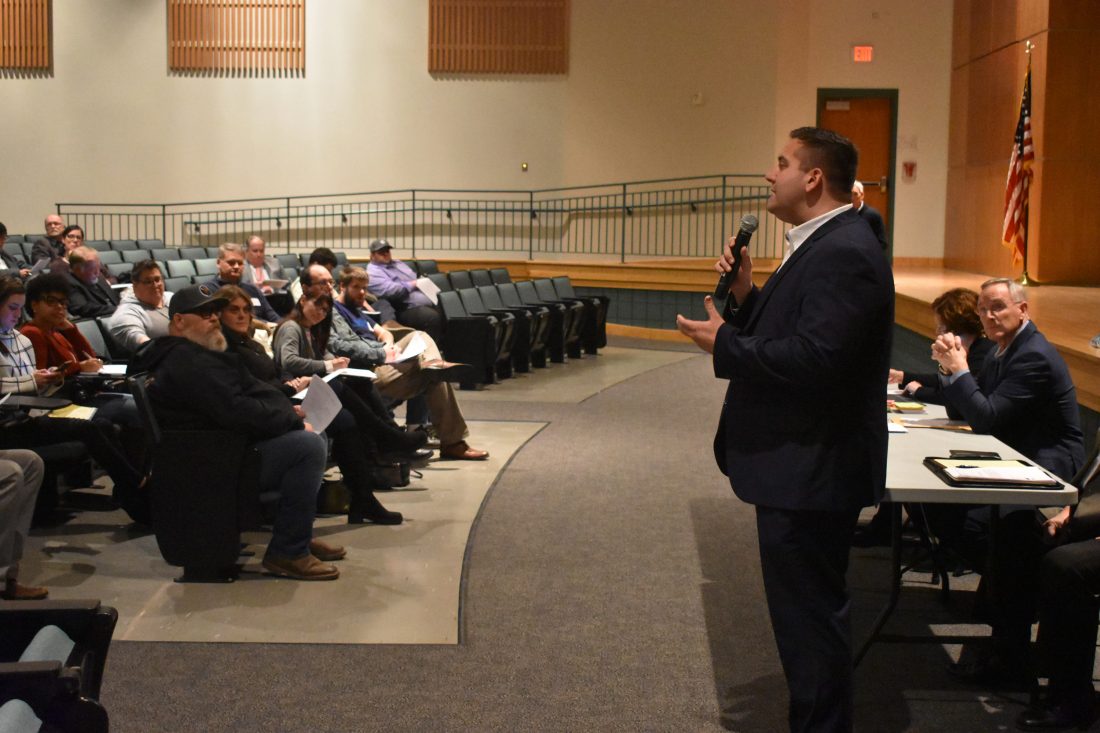 Jamestown mayor-elect Eddie Sundquist held the first of four community engagement meetings scheduled in the month of December on Thursday inside Jefferson Middle School. Sundquist was joined by the Jamestown Economic and Business Development Subcommittee Work Group where the conversation among the public focused on the economy. P-J photo by Jordan W. Patterson

Jamestown mayor-elect Eddie Sundquist won’t take office until Jan. 1, but that hasn’t stopped him from beginning preliminary work for the position with the goal of creating “a roadmap for the future.”

Inside Jefferson Middle School, Sundquist and members of his transition team held the first of four community engagement events set in December.

“We’re excited about the work that we’re going to be doing and we’re excited about having this transition team,” Sundquist said. “What our team is meant to do is it’s a group of individuals not part of the city — they’re not serving on city boards or functions –and they’re sole goal is to get input from the public to better understand some of the issues we talked about on the campaign trail.”

“I think our mayor-elect has a very unique and open way of beginning his term,” Edwards said.

Much of the conversation from the public, tailored around city development and growth, highlighted target areas in the city. Those ideas shared Thursday included improved marketing of Jamestown, increasing downtown foot traffic, looking into offering bilingual classes for residents for Spanish and English, using development ideas from similar-sized cities in New York state, better assisting small-business entrepreneurs, improving public transportation and various ideas regarding job creation, among many other suggestions and concerns.

An example of one concept shared Thursday was from Marty Schwab, owner of The Beer Snob. He suggested hosting more intentional seasonal events to drive economic impact.

“One way us downtown businesses could benefit a little more is in a couple of ways, one being embracing the seasons,” he said.

“Perhaps putting together a winter festival. I know Eddie you and I talked about Montreal but on a smaller scale. Not just embracing the summer, but embracing the seasons all year round.”

The transition team partnered with Jamestown Public Schools to provide a location for each event.

Each meeting will have a different focus including economic and business development, housing and public safety on Dec. 10 at Washington Middle School, financial stability on Dec. 11 at Persell Middle School and city operations and human resources on Dec. 17 at Jamestown High School.

“We’re very excited to partner and work with the city and its residents to improve our community,” said Dr. Bret Apthorpe, JPS superintendent, as he introduced Sundquist on Thursday.

“This is a great thing,” Sundquist said of the turnout and the meetings going forward.