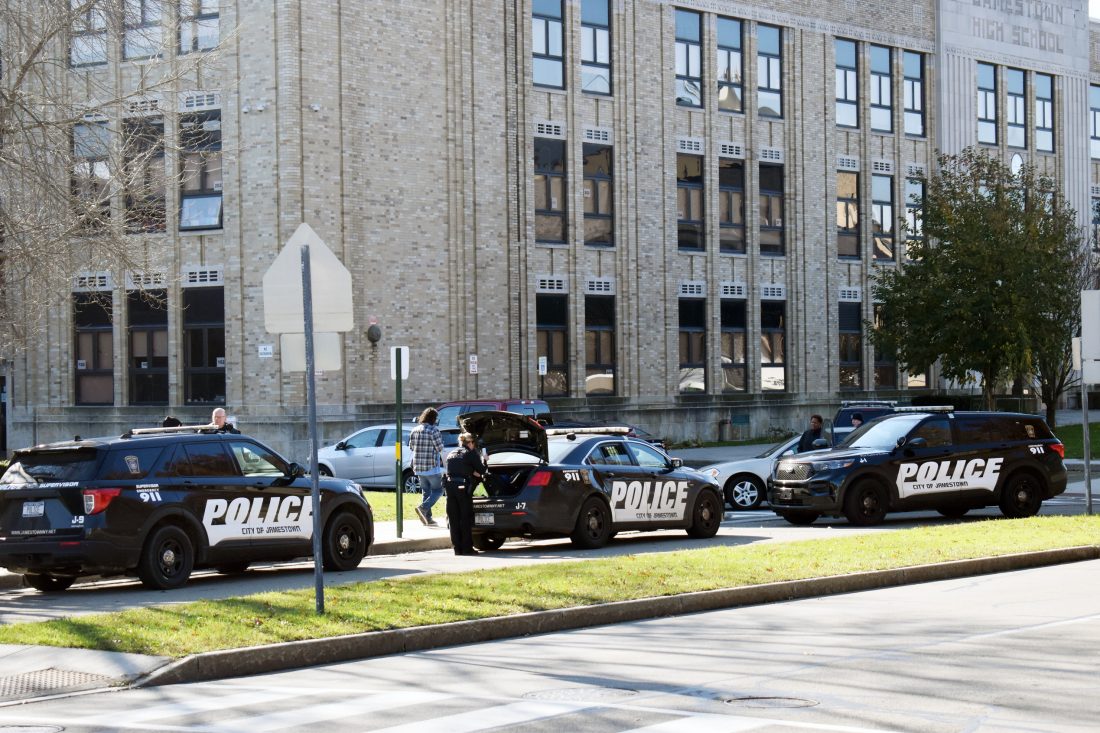 Officers are pictured outside Jamestown High School after a fight broke out among students Wednesday morning. P-J photo by Eric Tichy

Jamestown police were called to the East Second Street high school at about 10:30 a.m. Officers assisted school security, and “several juvenile subjects who were actively involved in the fight” were held, police said in a news release.

No one was seriously injured in the incident.

In a statement, Dr. Rosemary Bradley, high school principal, said the lockdown was issued to keep “all students and staff safe.”

“The JHS staff and Jamestown Police Department responded swiftly,” Bradley said. “No weapons were used during this fight. There were no serious injuries, and parents of the students involved have been notified.”

Bradley said a small hallway window was broken during the altercation.

Capt. Robert Samuelson of the Jamestown Police Department told The Post-Journal that at least two students had been detained, and noted that surveillance video from the high school would be reviewed. He said charges as the result of the fight are pending further investigation.

A heavy police presence was visible outside the school for about an hour after officers were first called. At least two people could be seen sitting in the back of a police cruiser.

The school district announced around 12:20 p.m. that the lockdown had been lifted.

Bradley said safety remains the “No. 1 concern,” and that district officials will not tolerate “kind of behavior in our school.”

“As a school community, we are going out of our way to create an environment where your child is safe and able to be successful in every way,” she said in her statement. “This incident will not define who we are. We continue to have high expectations for all our students, not only academically, but also in how we treat each other as a school family. Please take this opportunity to talk with your child about the importance of contributing positively to our school environment.”