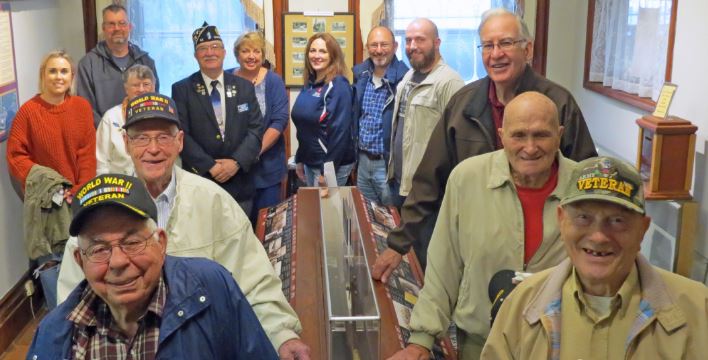 Eight local Veterans recently met and embarked on a trip to Washington, D.C., as part of Buffalo Niagara Honor Flight No. 9, which took place Oct. 13.

The group was headed by Misty Weber, administrator of the Warren County Virtual Academy, and were part of a veteran/student program through the academy. World War II veterans Paul Hannold, Kenneth Sorenson, Frank Tittio, and Korea veteran Emil Bundy, were joined by Dorothy Hannold (an employee of the War Department during WWII), Diane Swartz, Scheron Sorenson and Douglas Temple. Joe McClellan would meet his veteran, Ted Harbridge of Niagara Falls, at the Meet and Greet.

Five previous Honor Flight veterans — Angelo Bonta, Gene Coan, Art Hodges, Jack Hayward and Omer Post — knew exactly what this trip would mean to them, and stopped by to send them off with well wishes and handshakes.

They were joined by Chautauqua County Legion Commander James Lemanski, as he thanked them for their service and wished them well.

The county Veterans Services van picked them all up at the Fenton Mansion, and headed for their meet and greet at the Made in America Store in Elma where they would meet the rest of the veterans, guardians and Honor Flight volunteers traveling on Honor Flight No. 9.

There, they were joined by the other three Veterans and guardians — WWII veteran Esterino Rigazzi and David Jeannerat of Erie, Pa.; Korea Veteran Richard Watt and Mark Peters of Cassadaga; and Stan Kawski (Korea Era) and Commander Henry Link (Vietnam Era), both of Brocton Legion Post No. 434.

After a picnic lunch and musical entertainment, the group was transported to the Aloft Hotel to get a good night’s sleep before the big day. Leaving early Sunday morning to arrive at the airport, the happy group was overwhelmed and amazed at the outpouring of patriotism and honor bestowed upon them as they entered the airport and visited the historic war memorials, Arlington National Cemetery and the Tomb of the Unknown Soldier.

At the end of the day, they enjoyed a dinner and entertainment before heading for the Baltimore Airport for the return flight to Buffalo. Some veterans and guardians ventured home on their own, leaving Buffalo around 11:30 p.m., but four veterans and guardians stayed another night to rest up for the morning ride back to Jamestown in the Veterans Services van.

While all veterans agree that an Honor Flight is the “most incredible experience of all,” the eight local veterans added some specific memories they will cherish forever.

For Emil Bundy, it was the large crowds at the airport thanking the Vets for their service.

Paul Hannold was “amazed, excited, flabbergasted,” and had never shaken hands with so many people all in one day.

Stan Kawski said the trip was a thousand percent more than what he expected.

Esterino Rigazzi exclaimed “I’ll be darned” many times, and was most touched by the Audie Murphy monument at Arlington Cemetery and the “Welcome” at the airports.

Kenneth Sorenson was so grateful for the Honor Flight experience and was most touched by the World War II Memorial and Arlington National Cemetery.

Frank Tittio said the experience was “all new, never done before” and was amazed by how friendly everyone was.

Richard Watt declared “the reception at the airport was the nicest thing that has ever happened to me,” and he was impressed at seeing the memorials.

Ed Yager said, “I don’t like to use the word ‘Awesome,’ but it was. The airport crowd spontaneously sang the National Anthem, it was overwhelming.”

Veterans wishing to make the trip themselves can contact Fenton History Center at 664-6256. The next flight is coming up in May.

Let Me Tell You Of The Story

You Have Heard All Of These Before