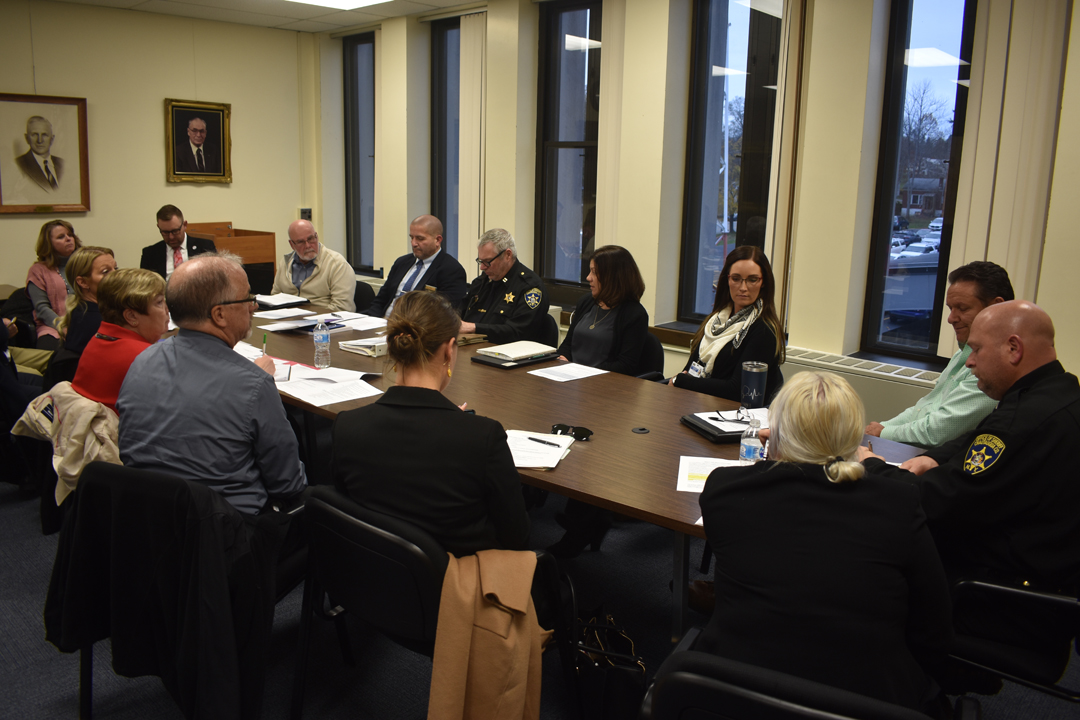 Members of the Community Justice Coordinating Council are pictured Wednesday where the preparation for incoming bail reform was discussed. P-J photo by Jordan W. Patterson

MAYVILLE — While new bail reform measures are set to be in effect two months from now, local agencies have doubled down on preparation and others have begun operating as if the law change is already in place.

At a Community Justice Coordinating Council meeting Wednesday, local representatives from agencies involved in the criminal justice system discussed what to expect from the Jan. 1 initiatives.

Under the new law, most charged with misdemeanors and non-violent felonies will be released under supervision (RUS).

These changes subsequently impact those charged with multiple drug offenses, even those with intent to sell, which has been a key concern for Patrick Swanson, Chautauqua County district attorney.

“My concerns are our ability to reach people that need it with the new bail statute where, I want to say, over 400 offenses you can’t get bail on anymore,” Swanson said. “So services we work very hard to provide inside the jail aren’t going to reach those folks.”

Many of those at the meeting agreed that the county should be proactive with the change and begin thinking of ways to benefit from the law. Much of Wednesday’s meeting focused on how to implement diversion programs within the community.

General discussion of the impending change focused on anticipated and likely impacts. Jim Crowell, Chautauqua County Jail warden, believed, like many others, that with bail reform the population of the jail will decrease, at least initially.

In that time period, the warden said there will be more space for other programming such as the treatment pod for inmates with addiction that has been previously discussed.

Already, the jail’s population has decreased from the summer months from 265 total inmates to the current population of 203 inmates. Crowell and Chautauqua County Sheriff Jim Quattrone believe some of the decrease could be attributed to some agencies and courts already operating under the bail reform’s guidelines.

Swanson said, as he has previously at CJCC meetings, that the reform will hinder the county’s ability to link and mandate incoming inmates to addiction treatment services. He has often described pre-trial detainment as a “tool” that offers offenders support programming. However, that tool will be less effective without any adjustments from the county, Swanson said.

The district attorney announced a forum being held at Jamestown Community College on Dec. 3 to discuss bail reform.

While Swanson has been critical of the reform, Public Defender Ned Barone believes the changes are “needed and necessary” and called certain characterizations of bail reform as “fear mongering.”

“In order to achieve what we need as a community and what each individual is entitled to constitutionally by this state the United States there are certain things they’re entitled to,” Barone said. “This is an opportunity. Rather than look at these new criminal justice reforms as an opportunity to create additional problems I think it’s an opportunity that we have to seize on being able to get individuals the help early on.”

Most at the table believe diversion programs will be key in being proactive with the law changes. One example of a diversion program that has often been discussed at CJCC meetings, even with former Sheriff Joe Gerace, is Law Enforcement Assisted Diversion, or LEAD, an initiative used in Albany. Essentially, officers are trained to link individuals who are about to be charged with a crime to necessary services. For example, in Chautauqua County individuals suffering from mental illness or addiction could be diverted to local agencies for help available 24/7 instead of being arrested and charged with a crime.

“We’re going to see diversion anyways but this is an opportunity to help individuals that are really ready for the help to get it and even to have our officers encouraging the people we’re dealing with on the street,” Quattrone said.

He added that officers can even divert individuals to services who are facing an arrest.

The sheriff admitted that much of the difficulty of such an movement is connecting local agencies in the county already present with a LEAD-like program and providing funding for that initiative. Quattrone hopes elements of a diversion program can begin “as soon as possible.”

“We just need to know how to access (the services) and encourage the officers to continue to refer people or get them help,” Quattrone said. “Through our experience we found people when they’re ready for help they need help now. We can’t postpone it even a day.”