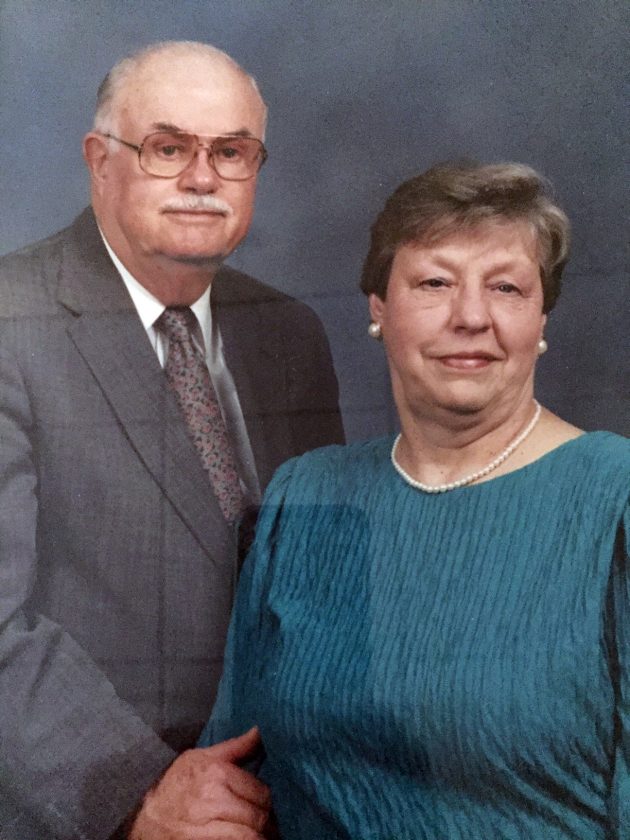 On Sept. 15, 1927 a baby girl was born at Silver Cross Hospital in Joliet, Ill. The Barnes Family named this baby, their first child, Carolyn and soon took her to their home on the Dupage River in Shorewood. In time she was joined by four siblings, two brothers and two sisters.

Carolyn walked one mile to a one-room country school until eighth grade, where the teacher lit a fire in the coal and wood stove that provided heat for the large room. The stove was in the middle, on the side wall, and those who sat near it were too warm and the front of the room was cold.

“The school had a coal bin and we would play house in it,” said Carolyn.

The same teacher planned plays for the children, with Carolyn once starring as Cinderella wearing a dress her mother made from crepe paper.

“I don’t know how she ever did that with eight grades in the same room. She was a good teacher. Sometimes she would have us come up and teach the other kids,” said Carolyn.

She met a girl when she was in sixth grade, who also attended her church. The new friend suggested they start a club. Soon the Know Your Bible Club, better known as KYB Club, was meeting in a little building in the friend’s yard.

“Her mother would play the piano very loudly in the house so we could hear and we would sing and study and memorize verses,” said Carolyn.

She remembered sitting on the steps of her home while playing simple games. In one game a child would put a pebble in their hand and the other kids would guess which hand it was in. She liked to do cartwheels too and had a male friend who did them with her. The main attraction in her neighborhood was at her house after someone gave her parents a pony.

“I always wanted to be planting and changing things, so I planted my parents’ (river) bank with flowers,” said the 92-year old woman. “One day it overflowed and washed the flowers away.”

She remembered swimming in the same river, until it became very polluted.

“It was a Hawaiian guitar with a steel bar and I think I could still play,” said the nonagenarian.

The musically-inclined young girl loved to sing. She sang duets with her sister at Troy Bible Church and sang in musicals at school, as well as in the school chorus from ninth through 12th grades.

Her dad was a truck driver and belonged to the Teamsters Union. He later drove truck for a war plant. Her mother had a beauty shop in their home.

“She had a good business because the ladies in Shorewood didn’t go into the city,” she recalled. “My mother was an excellent cook. She made bread and biscuits that you could smell (when) coming up the street and I would hurry home to get one.”

“They did neat things. Someone would come and show movies on a big screen. The whole village would turn out and we would sit on the ground or in lawn chairs,” she said.

Carolyn began dating Stan Stafford in 1945, when she was in 12th grade and married him on June 28, 1947. In the early years of their marriage, they too lived on the Dupage River, although their home was on the opposite side from her parents’ home.

Stan was always a purchasing agent, first in a munitions plant and then at Master’s Supply, a plumbing and heating business. Carolyn was a receptionist at a bakery machinery sales company until their son was born. While their children were young, she worked as a church secretary and when the children were a little older, she worked as a secretary for a realtor.

Before their youngest daughter was out of school, the couple decided to relocate to Jamestown where their two oldest children resided. “My husband was mowing the lawn one day and stopped mowing and said ‘come here. I think we should move to Jamestown so we will be there when they have (our) grandchildren.'”

They bought a new home on Carlson Road and with her husband’s help, she terraced the lawn. The first terrace was planted with hosta, the second with bushes and flowers and a flower garden was planted at the top. She also planted several more flower gardens on the property and had a rose garden.

“My husband grew some vegetables in my flower garden. He had his own little corner,” said Carolyn.

Stafford worked at Westburgh Electric in Jamestown. His spouse worked at Castle Realty as a secretary and later in the Colonade Building on the Chautauqua Institution grounds where she handled registrations for the Athenaeum Hotel and other Institution businesses. After that, she worked in the Institution’s marketing office. She ended her career after serving as the secretary for the comptroller at Alltel.

For nearly 50 years, the Christian woman was director of Awana Club, 19 years in Illinois and at Jamestown’s Hillcrest Baptist Church for 30 years. She attends Hillcrest University on Sunday mornings and organized the church’s funeral dinners for several years. She leads the devotions for Wise Outstanding Widows or WOW, a connection group for widows. For many years, she has belonged to the Book Bunch, a book club that meets in various local restaurants to discuss the latest book read by the members of the group.