After 70 years, Sgt. Gerald B. Raeymacker returned home to Dunkirk on Thursday. A Mass of Christian burial will be held for Raeymacker on Saturday at 10 a.m. followed by a service at Willowbrook Park Cemetery. P-J photos 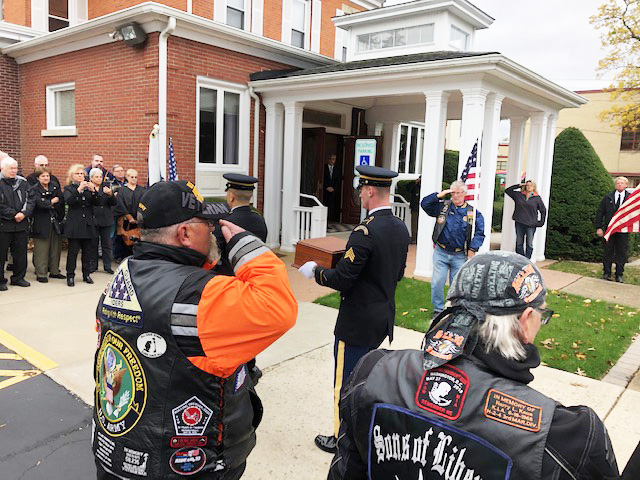 After 70 years, Sgt. Gerald B. Raeymacker returned home to Dunkirk on Thursday. A Mass of Christian burial will be held for Raeymacker on Saturday at 10 a.m. followed by a service at Willowbrook Park Cemetery. P-J photos

DUNKIRK — Escorted by the Patriot Guard motorcycles from the Buffalo airport, Sgt. Gerald B. Raeymacker returned to where he grew up after 70 years.

Members of the Sons of Liberty, New York State Police and family members were part of the ride from the Queen City to Dunkirk, where Raeymacker arrived at the McGraw-Kowal Funeral Home around 11:20 a.m. Thursday. Members of the Dunkirk Fire Department, Sons of Liberty as well as Dunkirk Police were at the Central Avenue location when the remains were removed from the hearse and moved to inside the funeral home.

Once placed inside, family members were the first allowed inside to pay their respects.

Others service members followed once the family allowed.

There are no services today. On Saturday, from 8:30 to 10 a.m., military service members are asked to pay their respects at Holy Trinity Roman Catholic Church in Dunkirk. 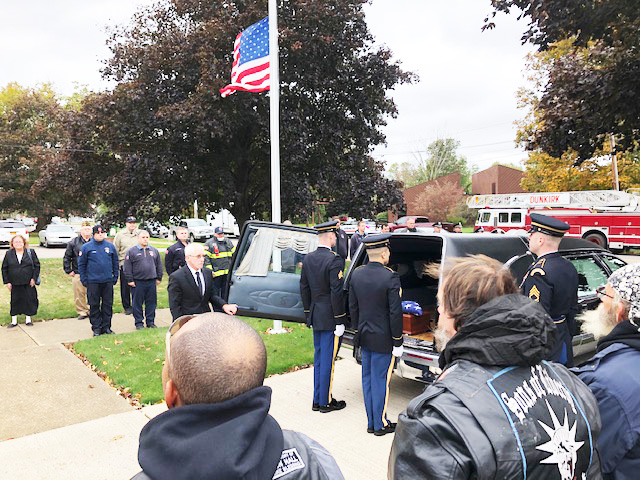 A Mass of Christian burial begins at 10 followed by an 11 a.m. service at Willowbrook Park Cemetery.

There, Raeymacker will be buried next to his mom, Margaret Deutsch Raeymacker Briggs. It was a wish she made to family members before she died.

The route from the airport was along the New York State Thruway west to Exit 59 continuing on Vineyard and Millard Fillmore drives before heading toward Dunkirk on Central Avenue. Weather conditions were harsh, but those part of the Patriot Guard persevered through rain, winds and 40-degree temperatures.

They were answering the call of duty — and proud to do so.

Raeymacker was a member of Battery B, 57th Field Artillery Battalion, 7th Infantry Division, 31st Regimental Combat Team. He was reported missing in action on Dec. 6, 1950, in the vicinity of the Chosin Reservoir, North Korea, when his unit was attacked by enemy forces. Following the battle, his remains could not be recovered.

On July 27, 2018, following the summit between President Donald Trump and North Korean Supreme Leader Kim Jong-un in June 2018, North Korea turned over 55 boxes, purported to contain the remains of American service members killed during the Korean War. The remains arrived at Joint Base Pearl Harbor-Hickam, Hawaii on Aug. 1, 2018, and were subsequently accessioned into the laboratory for identification.