Jim Mason, owner of the Taco Hut in Jamestown, looks over a 1960s photograph picturing himself and other employees from Rocketdyne in California that built parts for NASA from 1961-69. Some of the parts built by Mason’s team were used by NASA in its moon landing missions. P-J photos by Jordan Patterson

Pictured from left are Jim Mason, owner of Taco Hut, and his wife Kim Mason outside the business he created upon his return to Jamestown in the 1970s. Taco Hut has been open for 47 years. P-J photo by Jordan Patterson 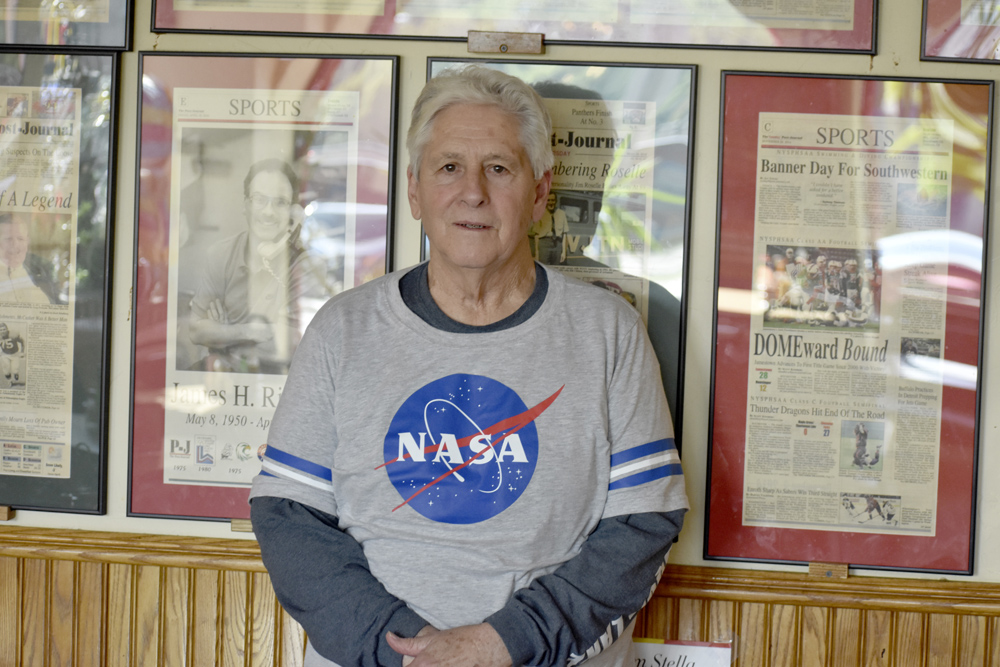 Jim Mason, known locally for creating Taco Hut in Jamestown, was once part of a group that helped put mankind on the moon.

And being a part of the Apollo missions has meant the world to him.

“I was up there with them,” Mason told The Post Journal, describing his feelings on July 12, 1969, watching the first moon landing. “I was so happy and thrilled that it worked. It worked. Damn, it worked.”

Mason created the local Mexican restaurant on June 16, 1972. But before that, he worked as a senior tool and die maker in California where he was employed by Rocketdyne from 1961 to 1969. 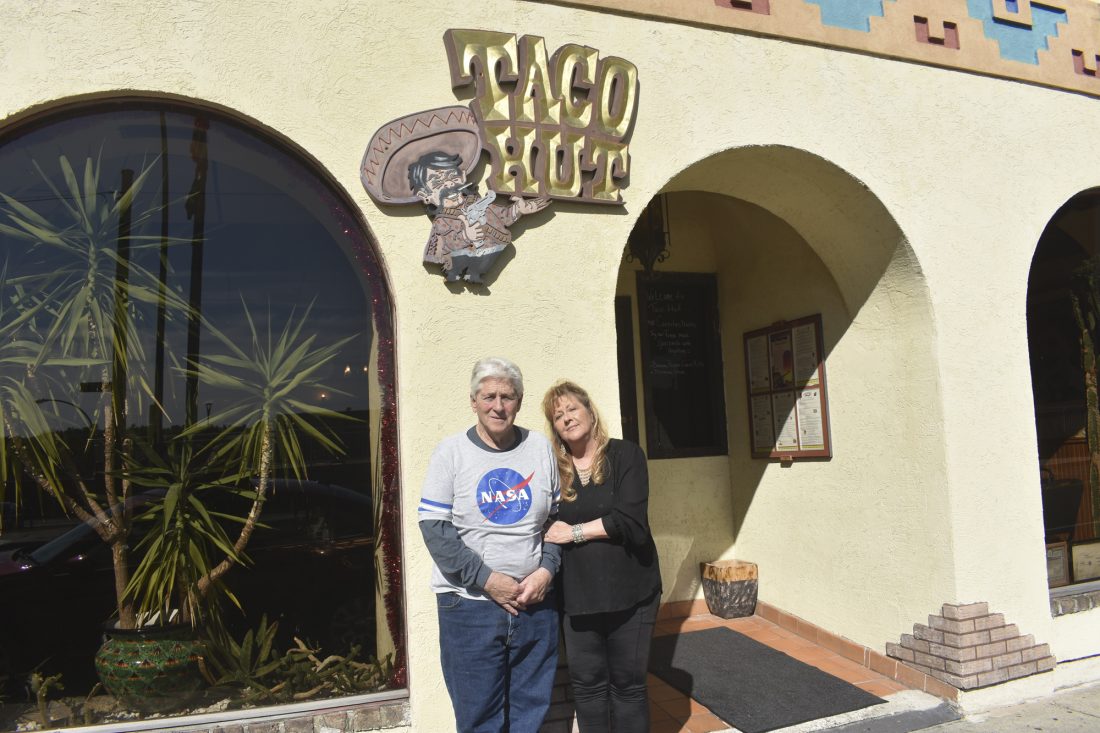 Pictured from left are Jim Mason, owner of Taco Hut, and his wife Kim Mason outside the business he created upon his return to Jamestown in the 1970s. Taco Hut has been open for 47 years. P-J photo by Jordan Patterson

The company, now known as Aerojet Rocketdyne and previously located in Canoga Park, Calif., worked directly with NASA, primarily creating parts for rocket engines. Mason worked there at a time when the U.S. was in a “Space Race” with Russia. He said with more “overtime you could shake a stick at,” the pressure of the other country’s competition to put the first person on the moon was felt.

The U.S. celebrated the 50th anniversary of the moon landing in July.

In the almost nine-year span Mason worked at the California manufacturer, he said his contributions to NASA projects were frequent, but noted that he was often left in the dark on certain details. Rocketdyne is credited as being NASA’s primary supplier of engine parts that were used in its Saturn rockets. The Saturn V rocket was used in NASA’s Apollo missions, specifically Apollo 11.

Mason recalled stories from his time at Rocketdyne.

He once help design an engine part that was to be used in a much larger project for NASA. However, the blueprints that detailed the actual scope of the project were confidential, even to Mason who had been given security clearance.

Mason remained coy on whether he snuck a peak at the blueprints of this particular project, but when it was over the corresponding documents were never seen again. Two plain-clothed men, who Mason said did not work in the factory, oversaw his work on the particular piece. Upon completion, the non-Rocketdyne men reviewed it, placed it in a plastic container and then left.

Despite the job’s inherent secrecy, Mason was more than willing to talk about the old days. He even has in his possession a black and white photo of himself and fellow Rocketdyne colleagues from the 1960s.

“I’m right there,” he said pointing out a young face in the image of about 20 men posing in a factory. “I was in my early 20s.”

Mason also stood next a tool box that he had taken to California with him more than 50 years ago.

One of his fondest memories working at Rocketdyne was watching astronauts Neil Armstrong and Buzz Aldrin complete the first manned lunar landing. He remembered watching the event from work. While the U.S. had accomplished what it set out to do, Mason remained concerned because the astronauts still needed to return to Earth.

But when they did, Mason and his colleagues let loose with emotions inside Rocketdyne.

“It was like a college football game when that thing lifted off the moon and got these astronauts back to the mothership,” Mason said. “We did our job.”

Mason graduated from Jamestown High School in 1959. Soon after, he began working at Falconer Metal Specialties as a tool die maker apprentice.

Asked if he went to college, he said, “that was my schooling,” working at Falconer Metal Specialties.

“I was lucky I made it through high school,” he said laughing.

But while in high school, Mason took advantage of the drafting, auto machine shop, wood shop and metal machine shop classes that were available. The classes he took at Jamestown enabled him to become familiar with machine work and reading blueprints.

“That was pretty much the start of my adventure,” he said.

Driving home from work one afternoon, Mason pulled over after he spotted his friend Bruce Smith.

And the Jamestown native agreed, leaving behind his life at the time.

Mason’s uncle, Olaf Johnson, also worked at the metal manufacturer. Johnson, who was initially upset that Mason was leaving for California, later told his nephew “it was best choice he ever made.”

Mason, when recalling his uncle, became emotional. He said receiving a compliment like that from Johnson meant “everything.”

Unknowingly, Mason’s move to California led him to Rocketdyne. And, similarly, his employment led to his fascination with tacos, later leading to the creation of his restaurant.

Before living in California, he had never tasted Mexican food. It was in a plaza near Rocketdyne where he first tried the cuisine.

“Right across the street was a Mexican restaurant. That’s where we’d go to lunch,” he said.

Mason and fellow Rocketdyne employees, some 10 people at a time, would frequently eat there. Initially, Mason wasn’t too sure what a taco was. He also couldn’t know at the time that when he returned to Chautauqua County he would eventually start a taco joint that would run 47 years, and counting.

“I got to liking this and having a taste for it,” he said.

And when he returned to Jamestown in the early 1970s, he couldn’t help but think about the lack of “good Mexican food” locally.

Before opening Taco Hut, Mason recalled being told by a restaurant equipment manufacturer, “Have you ever considered Swedish or Italian food?”

“There’s just not that many Mexicans around,” this colleague told Mason of the city’s demographics at the time.

Still, Mason and his wife at the time, Judith Zilmer, went forward with the business.

And in 1972, Mason became the owner of Taco Hut at the same, but much smaller, location. The building was formerly the Lyric Theater before the top portion was torn down. Kim Mason, Mason’s longtime wife, noted that Jamestown’s own Lucille Ball performed there.

Pronouncing Mason’s primary menu item as “tayco,” Volpe inquired about the food he wasn’t all too familiar with. Shortly after, Volpe continuously brought friends and family to try Mason’s food on the first day – as he continues to do now.

“I still have my very first customer,” Mason gloated.

Reminiscing on the 47 years of Taco Hut, the owner was confident it has had an impact on the community.

“I’m so proud of my husband,” said Kim Mason, with whom Mason has been with for 42 years.

Even after many decades of success, Mason noted that he will “never” retire.

Asked how long he plans to keep his Mexican restaurant open, Mason was blunt. Citing his four daughters and two grandchildren, he believes it could conceivably live on “forever.”