Pictured are Mike and Virginia Destro with their son, Michael. Submitted photo

The bride on her wedding day in 1949. Submitted photo

Even at 91 years of age, Virginia Destro is still very high-spirited and likes to dance. Photo by Beverly Kehe-Rowland 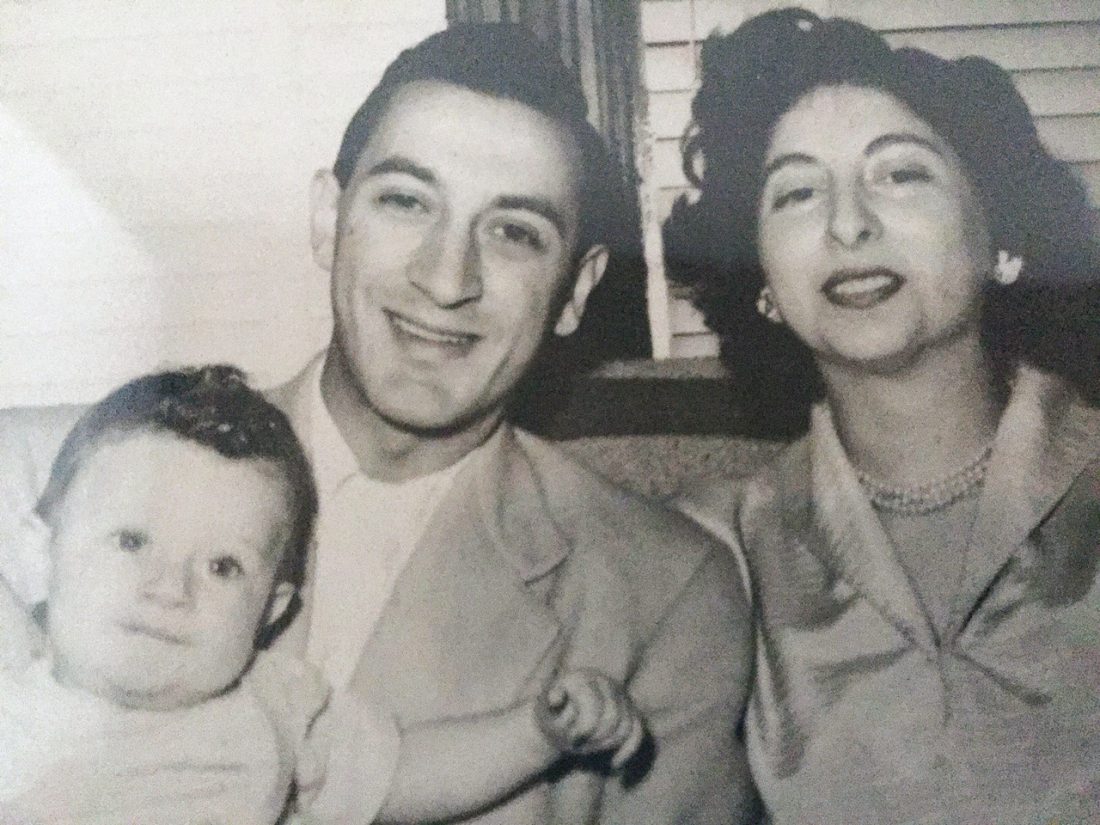 Pictured are Mike and Virginia Destro with their son, Michael. Submitted photo

“I always had fun and I still do,” said Virginia Destro.

The spunky lady was born into the Cusimano Family on June 17, 1928. The first born went home to 131 Allen St. Later the family moved down the street to 23 Allen St., a very large, beautiful home between the convent and the rectory of St. James Church. It grew by three more children, Anthony, Frances and Jo Anne.

Her father, Joseph Cusimano, had come from Sicily in the early 1920s with his mother and sister. He met Destro’s mother, Annie, in Jamestown. He was a cook at the Hotel Jamestown for 25 years and at the Town Club for 22 years. 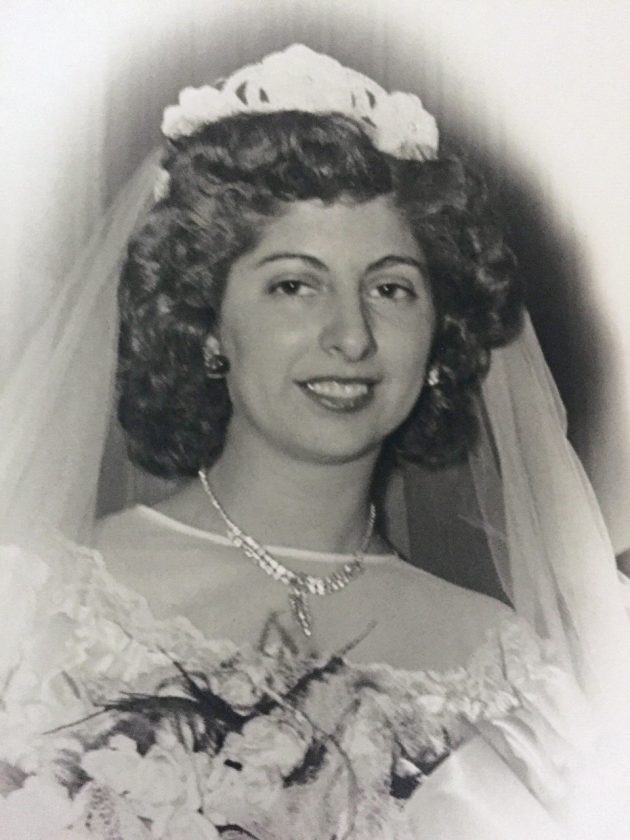 The bride on her wedding day in 1949. Submitted photo

Destro began her education at St. James Parochial School, the same school her mother had attended. She then moved to R.R. Rogers Elementary School for one year and then on to Jefferson Junior High and then to Jamestown High School.

“I played with a lot of kids. I love people,” said Destro.

She remembered playing hopscotch and with a spinning top when she was a little girl. She belonged to the Library Club while she attended Jefferson and belonged to Sodality, a Catholic youth organization. She met her life-long friend, Frank Migliore, at the dances that were hosted by the group in the church basement. The Roosevelt Theater on the corner of South Main and Harrison Streets was where she saw westerns and the popular movies of the day.

“I was very quiet. I was bashful at that time,” recalled Destro.

She was the oldest granddaughter and therefore was her Italian-speaking grandmother Vicenza Cusimano’s companion until she passed away when Destro was 13 years of age. 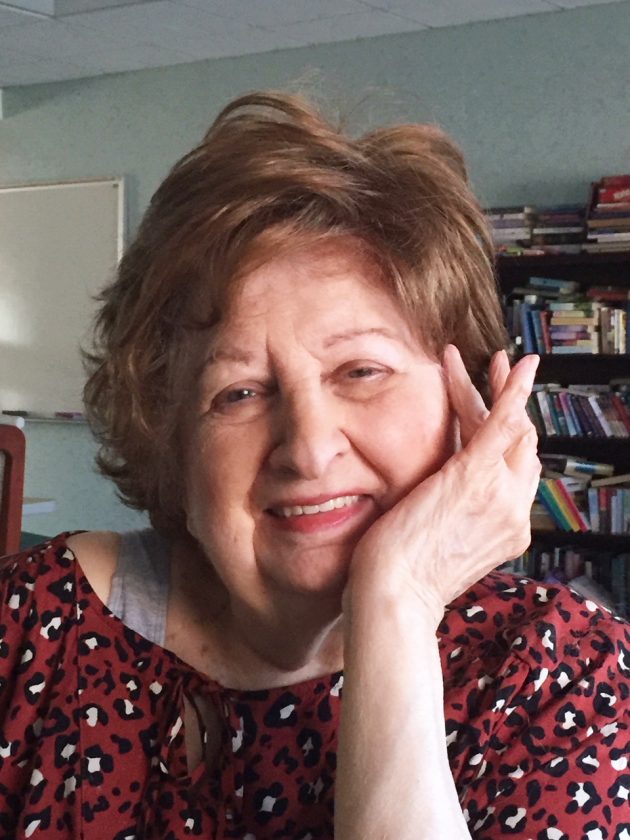 Even at 91 years of age, Virginia Destro is still very high-spirited and likes to dance. Photo by Beverly Kehe-Rowland

“She’d ask about the movie she’d been to. My mother would tell her in Italian,” said Destro’s daughter, Mary Ann Bianco.

“I would say I saw Tom Mix. He had guns and they go bang, bang and she would laugh,” said Destro.

Her grandmother was a rather large woman, therefore it was difficult for her to bend to wash her feet, so her young companion lovingly did it for her. The elder woman taught Destro to dance the Polka and to play her favorite card game. The granddaughter fondly remembered all of the company her grandmother had due to her many friends who lived farther down Allen Street, who stopped by when walking home from shopping or church.

Destro’s father never owned a car, but it wasn’t needed as they lived central to stores, schools, doctors, their church and any sort of business they may have needed.

She graduated high school in 1947 and went on to attend Roberts Beauty School in Buffalo for several months while she stayed with her cousins. She remembered being asked to cut a “V” representing V-Day, in the back of a male student’s hair.

She started her career as a hairstylist at Raffa’s Beauty Salon on Third Street and then moved to Modern Beauty Shop. After that she was self-employed, opening Butterfly Beauty Shop in her parents’ parlor on Allen Street, which had once been her grandmother’s bedroom.

“I had them paint a big butterfly on my parents’ window,” said Destro.

She met Michael Destro at the Pier Ballroom in Celoron when his sister, Angie, introduced them. They were married April 30, 1949 after he served four years in the Air Force. They lived on the second floor of Destro’s parents’ house until after their second child was born.

In 1955 they bought a house at 228 Barrett Ave., where the beautician opened Virginia’s Beauty Shoppe. She moved once again in 1962 to a different home at 829 Newland Ave. “because there was a nice existing shop.”

Destro had her fifth child, a boy, in 1968. At this time Bianco was helping in her mother’s salon, something she had done since she was five years old. She took over the shop in 1973 when her Destro became her grandchildren’s babysitter.

“She wore a lot of hats,” said Bianco. “She was the best mom. My 15-year old brother was in a severe car accident. He was so seriously injured the hospital didn’t repair his multiple broken bones.” She went on to tell how her mother would put their little brother in the lap of the injured boy in the wheelchair and then push them where she needed to go.

Michael worked at Malleable Iron for a while, but spent most of his working years at Blackstone Corporation. While there, he took blueprint reading classes at Jamestown Community College and was president of the credit union for many years.

Destro liked to dance and went to The Rusty Nail with her friend, Elaine Cali. “I still like to dance. I do the polka and jitterbug,” said the high-spirited Destro.

“She doesn’t walk much but she sure can dance,” Bianco said while smiling.

Destro was a Brownie and Girl Scout leader when Bianco was young and has always been “a good Italian cook.”

In 1956, when she was in her late 20s, being curious, adventurous and possibly a little mischievous, Destro met Lucille Ball and Desi Arnaz after sneaking up to their room in the Hotel Jamestown with a friend when the couple was in town to promote their new movie “Forever Darling.” When the women knocked on the door of the hotel room, they were invited inside.

“They asked how we liked the movie and I said ‘it was wonderful,” even though I hadn’t seen it,” she confessed. “Lucy was very nice. Desi was flirty.”

“She wasn’t as nice to him,” said Bianco. “When he said he was from Jamestown, Lucy said while leaning on the podium, ‘how the h— did you get out?'”

Destro has been a life-long communicant of St. James Roman Catholic Church. She lost her husband in 2000, but still has all three of her siblings. Anthony Cusimano lives in North Carolina while Frances Bishop and Jo Anne Capizzi still live in Jamestown. She still has five children: Michael lives in Buffalo, Mary Ann in Chautauqua, Ronnie in Florida, Joseph in Tonawanda and Steve in Lockport. She is the grandmother to eight and great-grandmother to six. She now resides on the Lutheran Home’s campus at Hultquist Place.

She happily renewed her friendship with Frank Migliore after their spouses had passed away.