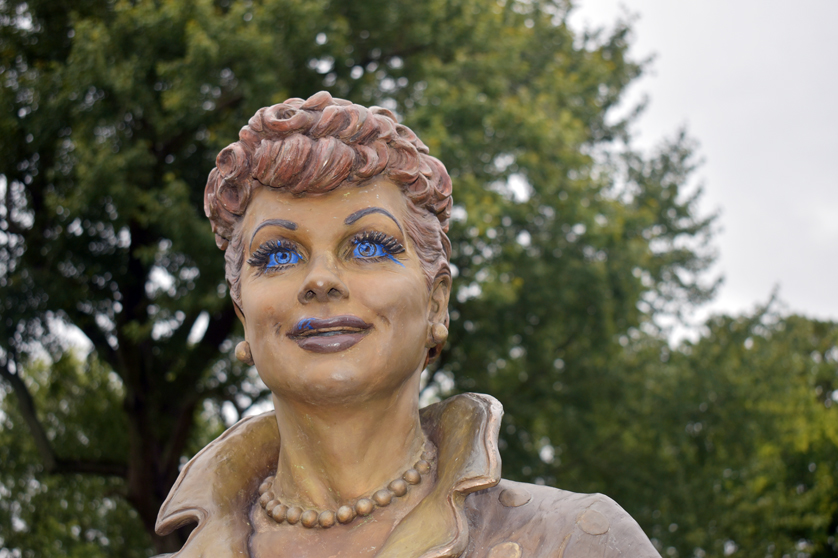 One of two Lucille Ball statues pictured at the Celoron village park after it was vandalized earlier this week. The mayor said it could be two to three weeks before the statues are repaired. P-J photo by Eric Tichy

The statues of Lucille Ball, located in the village park that also bears her name, were defaced early Monday using a blue paint marker. An outside wall of a bathroom located at the park was also vandalized.

“It’s disappointing for sure,” Schrecengost told The Post-Journal. “It’s going to cost a few bucks to clean and get them where they need to be.”

The mayor said he was first made aware of the incident after seeing photos of the vandalism on social media. He said he reviewed hours of surveillance video, noting that four of the park’s eight cameras — installed about six years ago — captured the man responsible for the damage.

That man turned out to be 42-year-old Howard L. McAvoy, a resident of Dunham Avenue in the village. 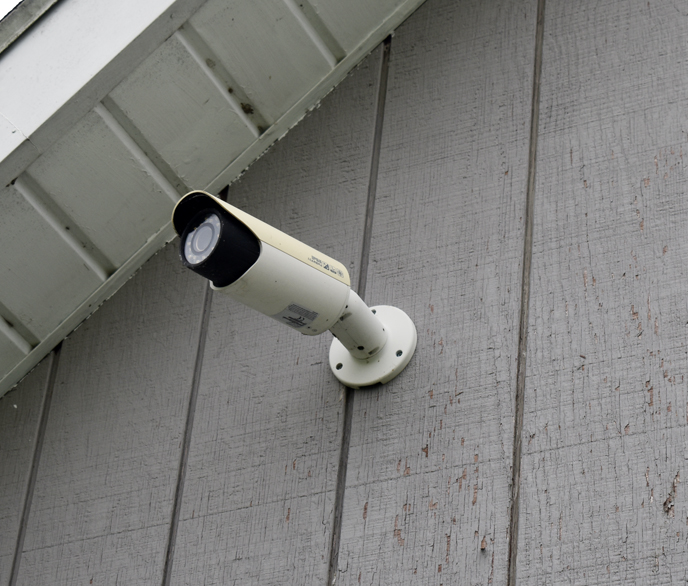 One of eight cameras pictured at Lucille Ball Memorial Park in the village of Celoron. Two statues of Ball and a bathroom wall at the park were vandalized this week. P-J photo by Eric Tichy

The Ellicott Police Department charged McAvoy with second-degree criminal mischief, a class D felony, after an arrest warrant was obtained.

“This type of crime just doesn’t make sense to us,” said Det. Kevin Pierce of the Elliott Police Department. “Vandalism of this nature is usually something a young child or teenager would do, but to have an adult do something like this just baffles me. The village of Celoron puts a lot of hard work into the maintenance of the park, and people from all over the Word come to visit the Lucy Statues. We cannot tolerate this kind of behavior.”

The statues, created by Dave Poulin and later Carolyn Palmer, highlight Ball, who grew up in Celoron.

Poulin’s monument of the famed actress received instant infamy when it was first unveiled, earning the nickname “Scary Lucy” due to its unflattering looks. Palmer’s version was unveiled at a ceremony in August 2016.

Due to concerns the bronze statues could be damaged using normal cleaning products, special care is being sought. The village reached out to Palmer this week to have her come and look at the damage. Schrecengost said it could be two to three weeks before the paint can be removed.

The mayor said the vandalism hurts not just the community, but to those who travel to the Jamestown area hoping to visit the many attractions dedicated to Ball.

“People come in from out of town, some from quite a distance,” he said. “It’s an inconvenience for them who spend good money that they can’t come here and enjoy these statues.”

McAvoy, who was taken into custody Friday, was transported to Chautauqua County Jail for Centralized Arraignment.