Adjustments Made To Proposed 2020 County Budget 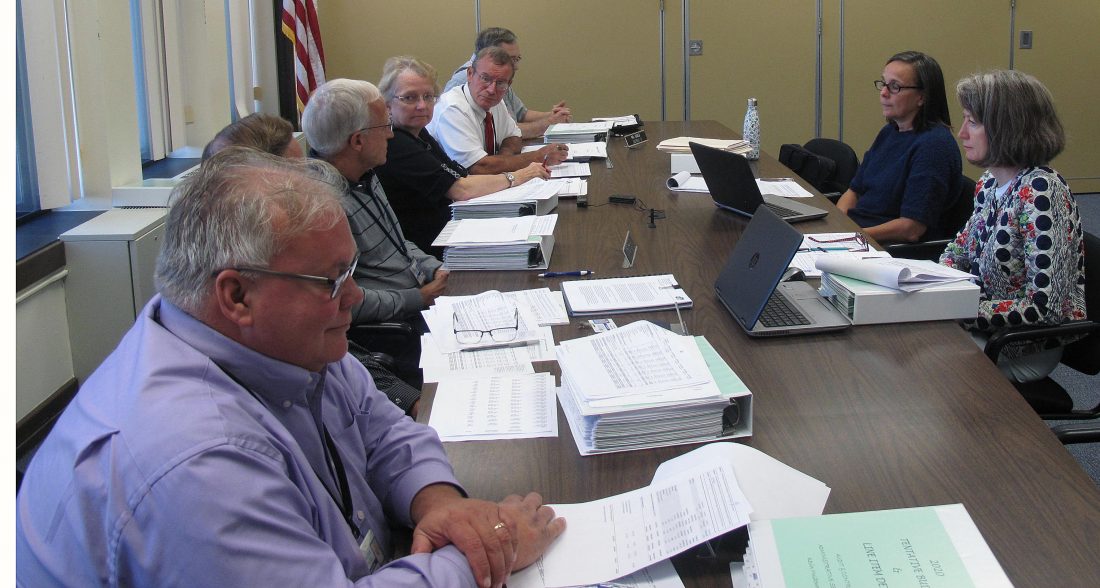 The Chautauqua County Legislature Audit and Control Committee discuss the 2020 proposed budget with Kitty Crow, county finance director, and Kathleen Dennison, county budget director, in Mayville Wednesday. The committee made adjustments to the proposed 2020 budget that will increase the tax levy and rate next year. P-J photo by Dennis Phillips

MAYVILLE — The tax levy and rate will both increase after 2020 budget adjustments were approved by the Chautauqua County Legislature Audit and Control Committee.

On Wednesday, the committee approved to increase the tax levy to $64,228,957, an increase of $2,317,810, or 3.7%. According to the state Department of Taxation and Finances, the tax levy is the amount raised through property taxes.

The proposed tax rate will increase 8 cents, or 1%, to $8.46 per $1,000 assessed property value. According to the state Department of Taxation and Finances, the tax rate is determined by dividing the tax levy by the total taxable assessed value of all property in a jurisdiction.

This would have kept the tax rate at its current level of $8.38 per $1,000 assessed property value.

Under the proposal approved by the committee, only $102,545 of the fund balance will be used in the budget. One of the concerns about the use of fund balance is based on having the savings between 5% to 15% of the annual total budget, which is recommended by the county’s finance policy. If county officials approve a budget that uses $738,000 in fund balance, the savings would fall to 4.8% of the total budget, which is below the finance policy recommendation.

The committee voted 4-1 to approve of increasing the tax levy and rate to use less fund balance. The one “No” vote was from Terry Niebel, R-Sheridan, who said he believes the county can go one more year with no tax rate increase. Three of the other members of the committee — Pierre Chagnon, R-Bemus Point and committee chairman; Chuck Nazzaro, D-Jamestown; and Kevin Muldowney, R-Dunkirk — all said that no one likes to raise taxes, but by not using the fund balance, the county will be in a better financial situation in future years.

“This will give us better footing into the future,” Nazzaro.

Chagnon said legislative committees who meet next week can still make adjustments to the proposed budget. Also, amendments can be made on the floor of the legislature during its voting session meeting Wednesday, Oct. 23.

All of the members of the committee also agree that more information is needed about the fly-car system’s use in the city of Jamestown before approving of the fourth car, which is mainly being requested by John Griffith, county emergency services director, because of the unbalanced amount of calls in the south county compared to the north county. In September, Griffith told the legislature Public Safety Committee that year-to-date, the fly-car car located in Sheridan had answered 770 calls; the one in Mayville had answered 848 calls; and the one in Falconer had responded to 1,489 calls.

During the Public Safety Committee budget hearing last week, Griffith said year-to-date there have been 385 calls answered by a fly-car in Jamestown.

Nazzaro said the fly-car doesn’t impact the local share in the budget because it will generate its own revenue. He said this will allow legislators to re-examine the proposal for a fourth car in the future once the updated financial information is provided and more discussion has happened with city of Jamestown officials.

City of Jamestown officials for the last month have discussed starting its own ambulance services because of the decrease in the amount of calls Alstar EMS, which is a division of UPMC Chautauqua, has answered in the last year.

Niebel said since 2015, an additional four employees have been added to the DA’s office, including the proposal in the 2020 tentative budget. Niebel recommended to cut the proposed additional assistant district attorney, which would be a savings of $86,435 — including salary and fringe benefits — in the 2020 budget.

Chagnon, Muldowney and Nazzaro all had reservations about Niebel’s recommendation. Chagnon said Swanson was very impassioned when discussing the need for the additional employees because of the new criminal justice reforms that will start at the beginning of the year.

“There are a lot of unknowns,” Nazzaro said about how new discovery and cashless bail laws will impact the DA’s office next year.

Chagnon suggested to Niebel, who is the Public Safety Committee chairman, to invite Swanson in for a discussion about his proposal to only add a part-time narcotics investigator in next year’s budget. Niebel said he will make the invitation to Swanson.