Smith Returns To Hometown As Doctor At UPMC Chautauqua 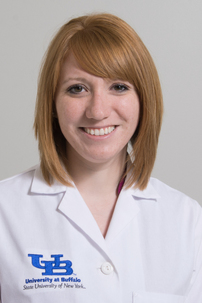 Smith grew up in Jamestown, graduated from high school in 2008, before going to Buffalo for college and learning about emergency medicine. Now, she’s coming back home to work as a doctor in her hometown.

Smith, shortly after graduating college, was approached by the Chautauqua Region Community Foundation, which had just started a program for medical students. The program allowed students to shadow doctors in the area as a way for students to familiarize with the different specialties that are offered in the field, as well as encourage the students to come to the area.

Smith said she already had an interest in emergency medicine, but it wasn’t until her third year of medical school where she got her passion for the subject.

“One of the doctors who was working at UPMC Chautauqua, gave me the passion for emergency medicine,” Smith said. “It became my specialty. It was his love for the area that inspired me to come back. I wanted to help him and UPMC Chautauqua succeed. When it came time to picking a job, it was a no-brainer. I was coming home where I could serve my people and give back to the community that helped me get my footing.”

Smith attended Lake Erie College of Osteopathic Medicine in Erie, Pa., before coming back to Jamestown. She said her hometown was in need of doctors, and she wanted to do her part.

“Everyday it feels like a bigger purpose than just coming to work and doing a job,” Smith said. “I feel like I’m serving a community that’s in desperate need of medical care and new and fresh faces that are up-to-date on the latest medical recommendations and procedures. It’s a blessing every day.”

Smith attributes a lot of her success to the support from her parents, her teachers and those at UPMC Chautauqua. She trained at Buffalo General Hospital and Erie County Medical Center, both being Level 1 trauma centers and stroke and heart-attack centers, and is board eligible in emergency medicine. She’s hoping to complete the board process in trauma, which starts next June.

“I’m extremely proud of her,” said Craig Smith, Jillian’s father. “She could have gone off in any direction, she had a lot of options, and I’m glad she decided to come back to Jamestown. It wasn’t something she had to do, but she decided this is where she had to be.”

Smith said it’s really good for the area that so many young doctors are coming to town with specialties in emergency medicine.

“In the past, doctors wouldn’t have training in certain fields,” Craig Smith said. “These younger doctors are being trained in all aspects of medicine. As a person getting close to retirement, I’ve seen so many friends with kids who leave the area. It’s refreshing when someone actually wants to come back to Jamestown — especially a doctor.”

Smith said she was excited to come back to Jamestown and see how much the town has changed. She remembers a lot of her high school teachers and being on the tennis team.

“Coming back and seeing Chautauqua turning into what it is, and seeing the Comedy Center is exciting,” Smith said. “These are exciting times. UPMC Chautauqua is in transition. They’re going great places and I’m excited to be a part of it.”