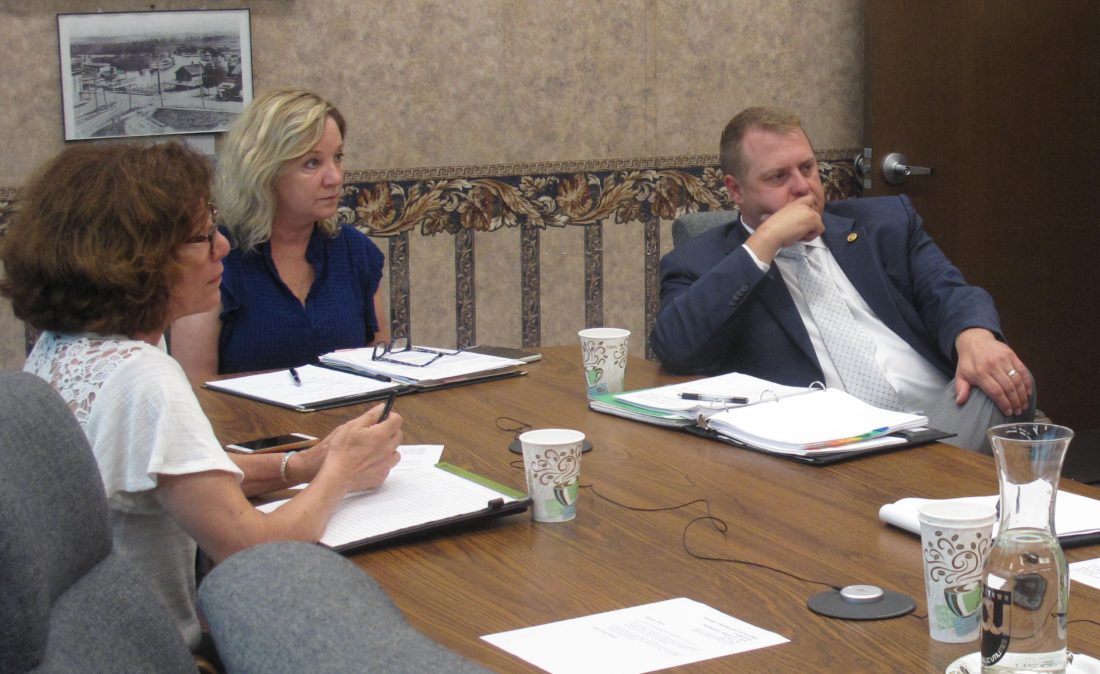 Middle, Kathleen Eads, Reg Lenna Center for the Arts executive director, during a Jamestown Strategic Planning and Partnerships Commission in August. Eads told The Post-Journal Tuesday that she will be resigning as the director of the Reg to take a new position at Lindenwood University to be the director of theater operations for its performing arts center. P-J photo by Dennis Phillips

The executive director of the Reg Lenna Center for the Arts is resigning at the end of the month.

On Tuesday, Kathleen Eads, Reg Lenna Center for the Arts executive director told The Post-Journal she is officially resigning from the Reg Sept. 27. She is headed to St. Charles, Mo., to Lindenwood University to be the new director of theater operations for the school’s performing arts center.

“I had an opportunity that presented itself and it’s a really wonderful opportunity for me,” she said. “It was a hard decision.”

Eads has really liked her more than five years as the leader of the Reg, having started in January 2014.

“I really enjoyed every little bit of it,” she said. “I’ve really enjoyed the people and certainly the staff. I appreciated the support from the community. We have improved things. I will be leaving it better than I found it.”

Eads said the task she was able to accomplish as executive director that she is most proud of is the renovations to the center. The $4.5 million renovation project was finished Nov. 9, 2018, with the most public viewable change to the complex being the redesign of the theater’s lobby, located at 116 E. Third St.

Along with the new lobby, which also includes a new box office, the seven-building Reg complex is now more connected, starting with how the theater lobby opens up into the new Buffalo Bill Billboard room, which is next Full Moon Rising Bakery. The new Buffalo Bill Billboard room houses the famous 1878 poster and includes tables, chairs and couches so people can eat a salad or a sandwich while viewing the oldest existing billboards in the United States. The poster was originally pasted on an exterior building wall on Pine Street in 1878 to advertise a play about Buffalo Bill Cody, which was rediscovered in 2002 behind a crumbling wall.

Changes to the Reg also included improvements to WRFA studios. The Reg’s radio station, 107.9 WRFA, was expanded into three on-air studios on the third floor. The renovation project also included moving the 3rd on 3rd Gallery to ground level. Along with local art displayed on the walls, the gallery has tables where people can sit and discuss the featured artist.

Funding for the project came from several sources. The Reg revitalization project was one of 10 projects that received funding through the state Downtown Revitalization Initiative program. Reg officials were funded $1.5 million through the DRI program for the renovation project.

Reg officials also secured local funding for the project from various foundations in the amount of $3.2 million including $1.5 million from the Ralph C. Sheldon Foundation; $900,000 from the Gebbie Foundation; and $850,000 from the Lenna Foundation.

Eads said the Reg board has started working to find a new executive director.

“Things will continue to run smoothly over here,” Eads predicted about the transition period between executive directors.

Prior to becoming the Reg’s executive director, Eads was the managing director of the Anateus Company in Los Angeles, Calif. She had also worked for Disney Theatrical as their senior Broadway marketing manager and was also instrumental in the creation of Baruch College’s Performing Arts Center, serving as its first general manager and director.