Despite Weather, Turn Out Good For Kallie’s Krusade

A runner being blasted with a color-laced fire extinguisher as she approaches the finish line of the Kolors for Kallie 5K during Kallie’s Krusade on Monday in Lakewood. Photo by Daryl Simons Jr.

A family of runners hi-fiving each other after completing the 5K during Kallie’s Krusade on Monday in Lakewood. Photo by Daryl Simons Jr. 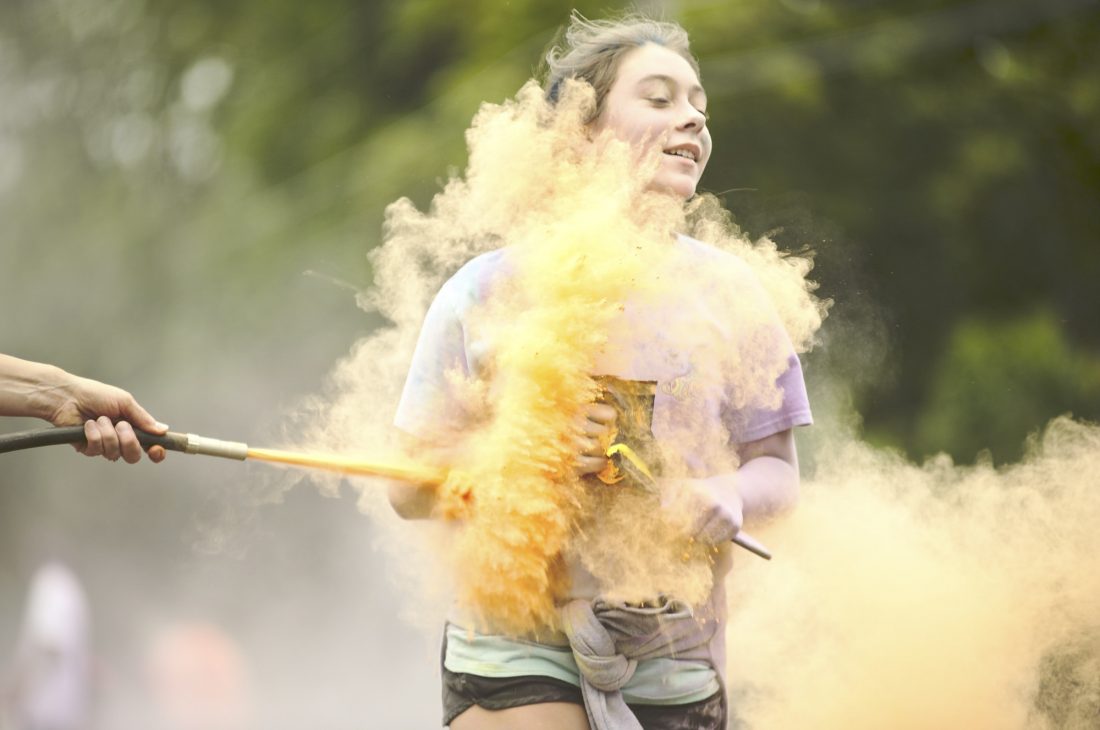 A runner being blasted with a color-laced fire extinguisher as she approaches the finish line of the Kolors for Kallie 5K during Kallie’s Krusade on Monday in Lakewood. Photo by Daryl Simons Jr.

LAKEWOOD – “It’s a celebration. It is in honor of Kallie, but it’s to celebrate those families that we have been able to help as well,” said Tara Swan, co-president of Kallie’s Krusade, and Kallie’s mother.

Kallie’s Krusade was hosted at the Lakewood Rod & Gun Club. This was the seventh year of “Fighting Like a Girl” against pediatric cancer and other childhood illnesses.

Rain plagued Labor Day weekend, but after a downpour early morning, sunny skies returned. Despite the weather, Swan said that they still had a good turnout this year.

“We are very fortunate that the community is so supportive,” Swan added.

The major fundraising takes place through their Motorcycle Kruise for Kallie, and the Kolors for Kallie 5K Run. What sets the 5K apart from other color runs is the use of fire extinguishers. 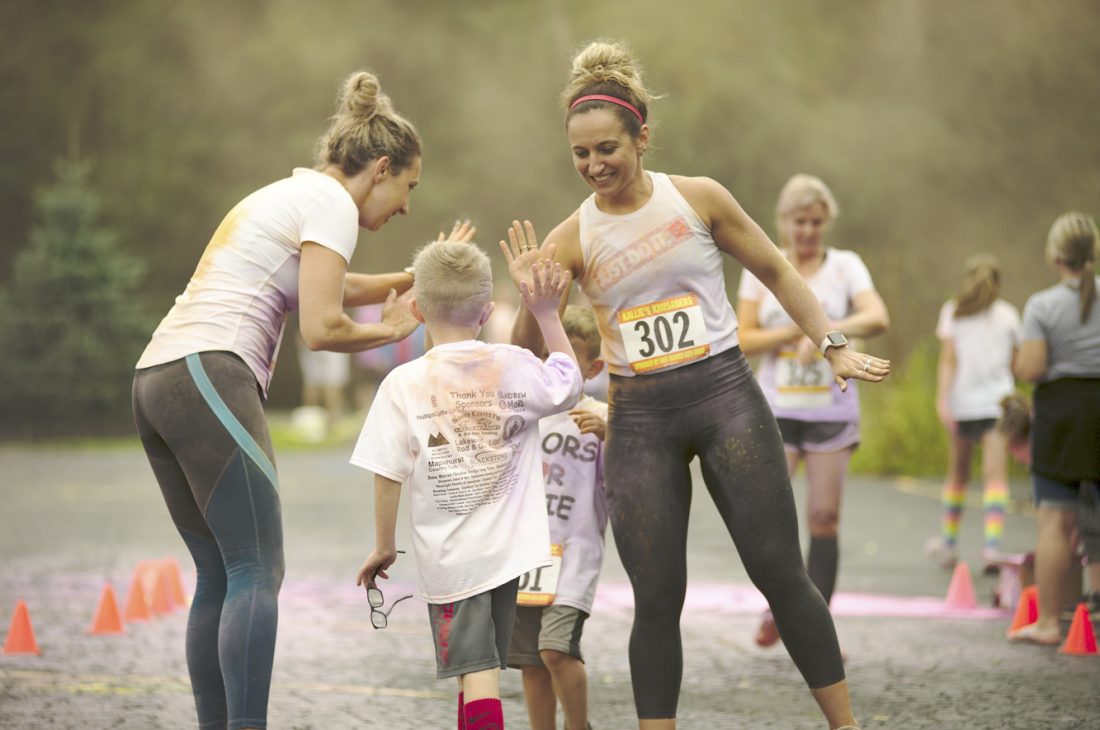 A family of runners hi-fiving each other after completing the 5K during Kallie’s Krusade on Monday in Lakewood. Photo by Daryl Simons Jr.

“Within the extinguishers, it’s just a color powder…. In other color runs, they usually just throw it. The inclusion of fire extinguishers for spraying colors creates a big difference with our 5K,” Swan explained.

The Krusade works with Allen Fire Equipment who provide and fill the fire extinguishers.

Swan said that they had more participants pre-register this year than the total of everyone who ran the previous year.

For the past seven years, the Krusade has raised over $150,000, helping 75 families and more than 25 organizations. The 5K and Motorcycle Kruise are not the only fundraising events anymore.

“One new thing we added this year was a kickball tournament back in July. And then in August, we had a Women’s Shenanigans Golf Scramble. It was so much fun, and have been very busy,” Swan said. 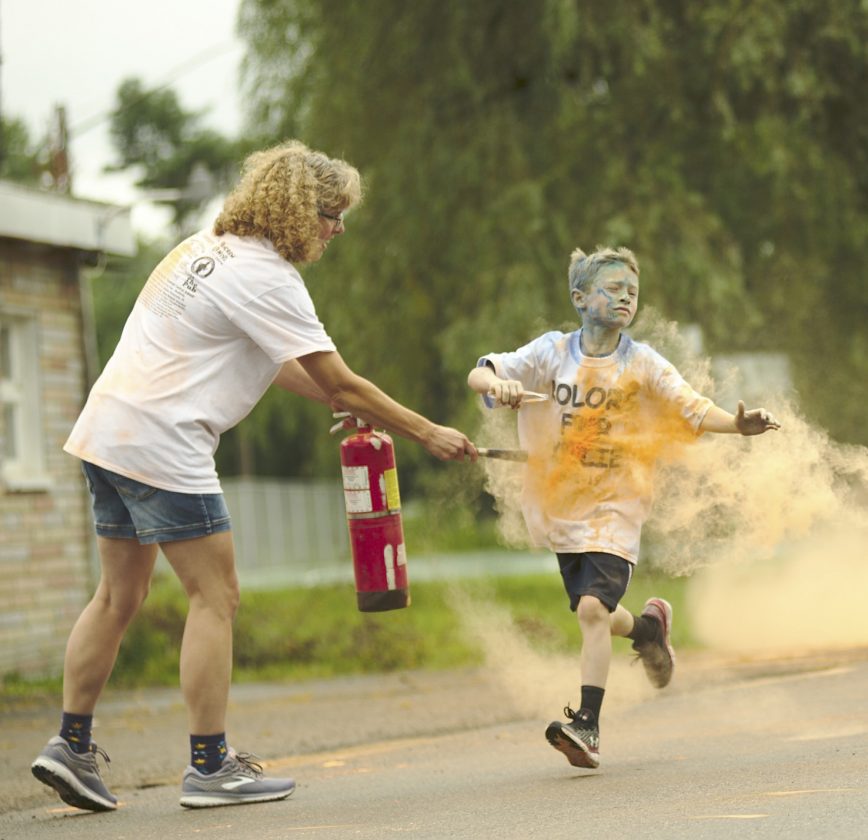 This past year, a fish tank was pruchased for the Oishei Children’s Hospital.

“The fish tank has been installed in the Radiology department. We were just happy to be able to put something up there that, hopefully, the children will enjoy,” Swan said.

Near the live band within the outdoor pavilion, Alex’s Lemonade Stand could be seen. Money raised there goes to research towards pediatric cancer.

Outside of the fundraising efforts, numerous activities and food for kids and adults were offered. From a petting zoo, to ball tossing, to memory games, lawn darts, a corn hole tournament, volunteers dressing up as superheroes, a live band, and disc jockey, face-painting, a dunk tank, as well as a goat who liked to chew on clothing. There was something for everyone.

Kallie’s Karnival encompassed these children-centric activities. Swan said that, “we do this for the kids. Everything is just near and dear and special to us.” 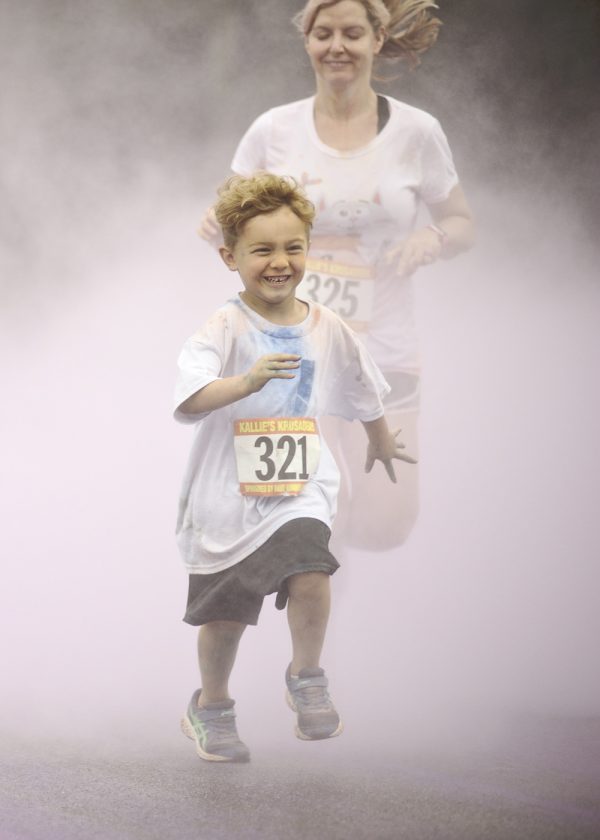 A point of emphasis was the Be the Match for bone marrow donations. Swan said that the blood donations stay local in the Western NY region, and the importance of donating is potentially life saving.

“In order to receive a bone marrow transplant, there needs to be donors available. So we encourage people to donate if they can,” Swan explained.

Swan recently attended the Chautauqua County’s Legislators meeting, and they made a motion for the county to designate September as Pediatric Cancer Awareness Month.

“This could not be possible without family and friends coming together to do this. All the different organizations donating their time,” Swan said.

As to why they continue doing this, Swan added that, “people were just so kind and giving to us with Kallie, and now it is an opportunity for us to give back to them.”