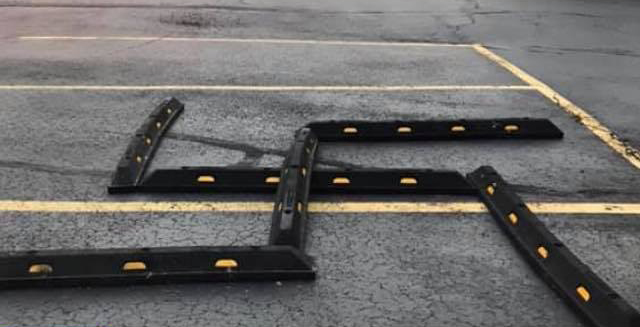 A swastika is pictured in the parking lot of a Jamestown business last week. Submitted photo

A swastika left in the parking lot of a Jamestown business last week should be used as a teachable moment, state Assemblyman Andy Goodell said.

The symbol, using parking ties from the lot, was discovered sometime early Friday. The business, which declined to comment, contacted the Jamestown Police Department, which sent officers to investigate.

Goodell, R-Jamestown, said he was very disappointed to hear the swastika had been made and left in public view. He noted that bills have been introduced in the state Legislature in the past banning the symbol. However, he said First Amendment issues have been raised regarding free speech.

He continued, “What’s disappointing is that the swastika represents a horrific period in our world history marked by the murder of millions of people. … When someone puts a swastika sign up, it’s an affront not just to all the Jewish residents who were mass murdered, but an affront to all the veterans in the United States that fought in World War II.”

Goodell said the swastika left overnight could have been “a prank by young kids.” However, he said it’s clear those who did it “have likely forgotten that their grandfathers served in the war fighting that very symbol.”

State Sen. Todd Kaminsky, D-Long Island, introduced legislation this month requiring private and public schools to teach students in sixth- through 12th-grade the meaning of the swastika as an emblem of Nazi Germany and the noose as a symbol of racism.

The bill (S6648), which seeks to amend education law, is in the Senate Rules Committee and could be taken up when the Legislature is back in session in January.

“Bigotry and hatred have no place in our diverse community and individuals who commit such shameful acts must be brought to justice swiftly,” Kaminsky told the New York Post on Aug. 12. “Swastikas are symbols of intolerance and have no place in our society. It’s unconscionable that individuals are allowed to display swastikas, and I will continue to lead the fight to end this spate of intimidation and bigotry.”

In May 2016, Kaminsky introduced legislation that would have outlawed the public display of swastikas and charge those who display bigoted symbols with a felony hate crime.