The Cleveland Construction boat navigates the course near Wright Park in Dunkirk on Sunday. Photo by Christian Storms

The Octane boat (No. 4, at left) goes airborne Sunday during the second annual Great Lakes Grand Prix in Dunkirk. Photo by Ron Szot 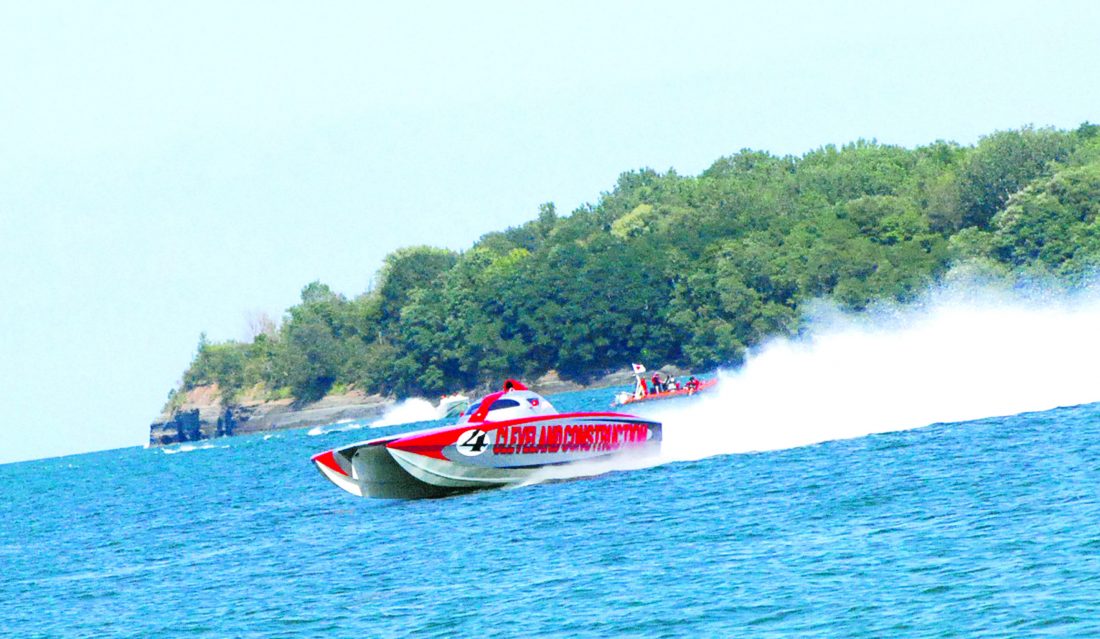 The Cleveland Construction boat navigates the course near Wright Park in Dunkirk on Sunday. Photo by Christian Storms

DUNKIRK — In the face of poor weather to start the day on Saturday, the weekend managed to finish on a bright note as Sunday was bright and sunny making for a great finish to the second annual Great Lakes Grand Prix in Dunkirk.

Racers and fans gathered Sunday in Memorial Park for the award ceremony, and Dunkirk Mayor Wilfred Rosas delivered a proclamation that Aug. 18 would be Larry Bleil Day in Dunkirk. Rosas thanked Bleil — the CEO of Race World Offshore — for helping to bring both national and international attention to the city of Dunkirk.

“This is not an easy event to put on,” Rosas said. “We did it. We did it for two years in a row. It was a successful event both years and I would like to thank all the participants, all the racers, and again Race World Offshore Racing here for coming to Dunkirk.”

The pier was the place to be on Sunday afternoon in Dunkirk, as everyone gathered to watch the Grand Prix.

Those who came out did not leave disappointed as they saw non-stop action on the water along with a thrill-seeking performance in the sky. 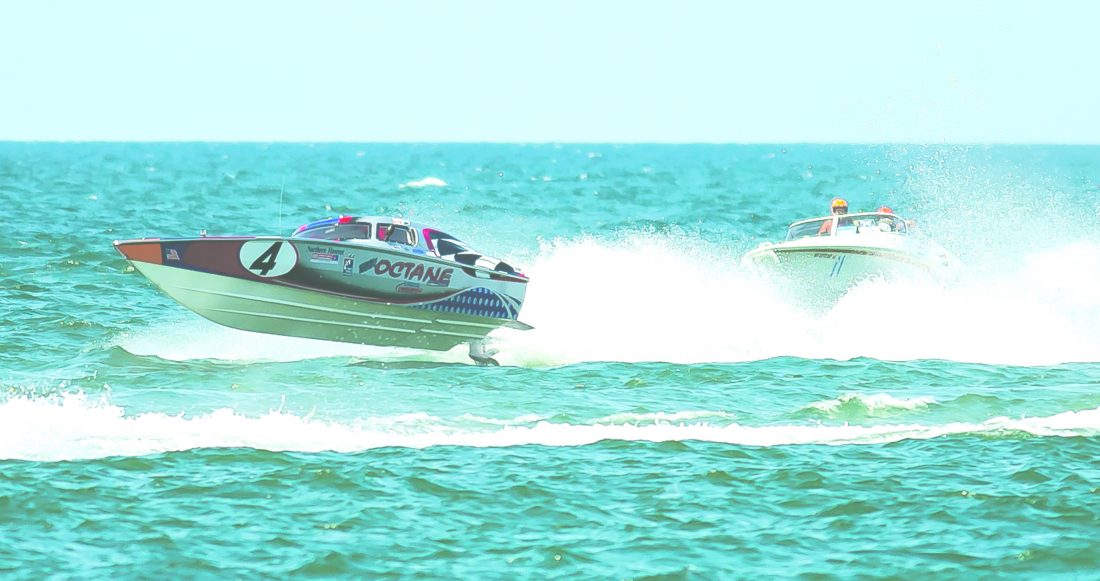 The Octane boat (No. 4, at left) goes airborne Sunday during the second annual Great Lakes Grand Prix in Dunkirk. Photo by Ron Szot

In that first heat, Cleveland Construction made the five lap, 2.5 mile course around Dunkirk’s harbor look like a piece of cake. However, the battle for second place was much more tightly contested as the No. 8 boat the Developer/Wix Filters sped past Simmonsmarine.com on the final turn of the fifth and final lap, giving them a second place finish.

“First race, kind of feeling out the water a little bit,” said Scott Brown of the Developer/Wix Filters No. 8 boat. “Try and work the boat and get the boat settled for the conditions. We wanted to make sure we raced hard and put on a good show for the citizens of Dunkirk, especially the kids.”

After the first race, the competing boats went to make sure if there was anything wrong with their boats and refueled for the final race. While the intermission was going on, fans were treated to another air show featuring the Wingwalker Carol Pilon.

“Had a little gremlin that popped up on us after the first race,” Brown said. “But we were able to chase it down and get it running before the second race.”

The second and final race started similar to the first one, Cleveland Construction jumped out to a very strong lead and looked poised to take home the overall crown. Unfortunately, the Cleveland Construction boat which appeared to be a crowd favorite ran into some mechanical issues that led to them falling all the way into last place.

With Cleveland Construction facing mechanical issues, it was the No. 8 boat the Developer/Wix Filters time to shine as they cruised to a first place finish. The winning crew of Scott Brown and JP Larkin completed the course with a time of 11:36.00.

“The second race we pretty much just went out there and let it all hang out,” Brown said.

The No. 404 boat Simmonsmarine.com improved their placing and took second in the final race.

“The people here in Dunkirk, the families, the kids are everywhere … that’s what the sports about,” Brown said. “For us it’s a lifestyle. We travel a lot. We want to race safe, but we want to put on a good show for the kids. There are future racers out there and we’re not going to be out there forever, so anytime we can accomodate kids — take them out, put them out on the boat, take pictures — we’re all about it.”