Jacobsen was the operator and guardian of the iconic Massey Memorial Organ that he often played inside the amphitheater. Photo by Mhari Shaw/The Chautauquan Daily 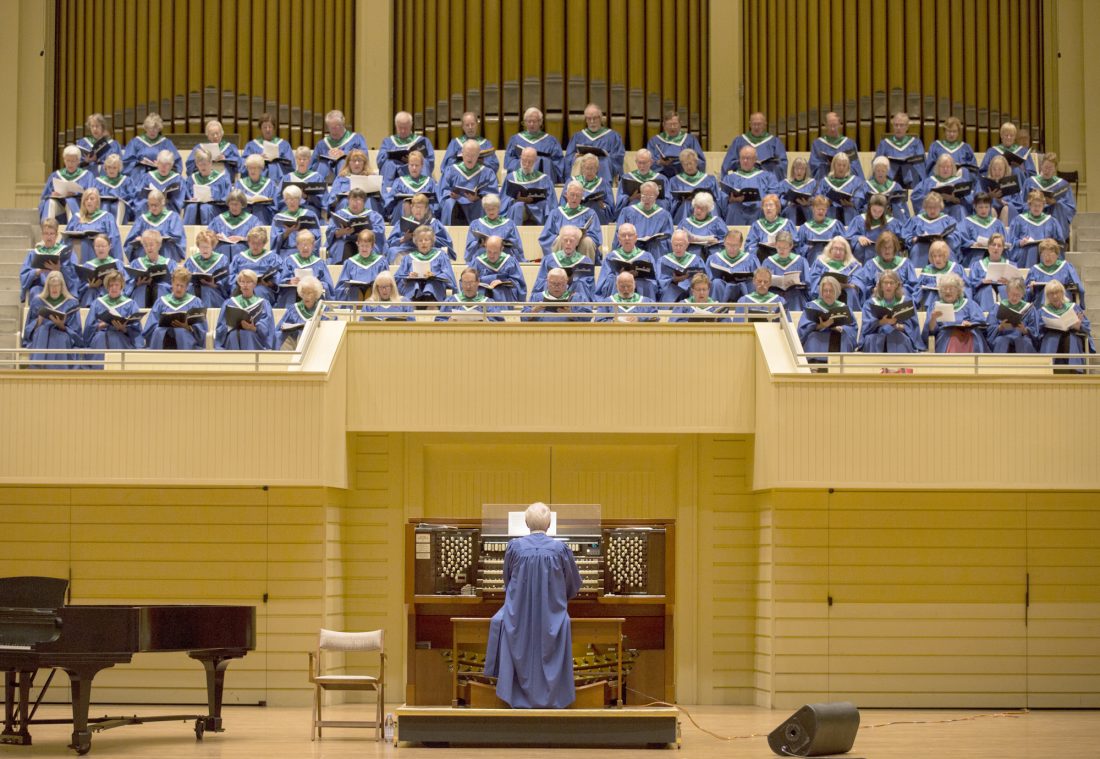 CHAUTAUQUA — Jared Jacobsen was described by those who knew him as the soul that drove Chautauqua Institution’s heartbeat.

Michael Hill, Chautauqua president, said Jacobsen’s two and a half decades as the organist and coordinator of worship and sacred music at Chautauqua kept “the time of a timeless community.”

Jacobsen died Tuesday afternoon following a car crash on Route 84 near Geneva, Ohio. He was 70.

Chautauqua officials and community members were in mourning Wednesday after news of Jacobsen’s death began to spread. A native of New Castle, Pa., he last performed at Chautauqua on Sunday.

In a statement, Hill said the Chautauqua community was “grieving this unspeakable loss.” 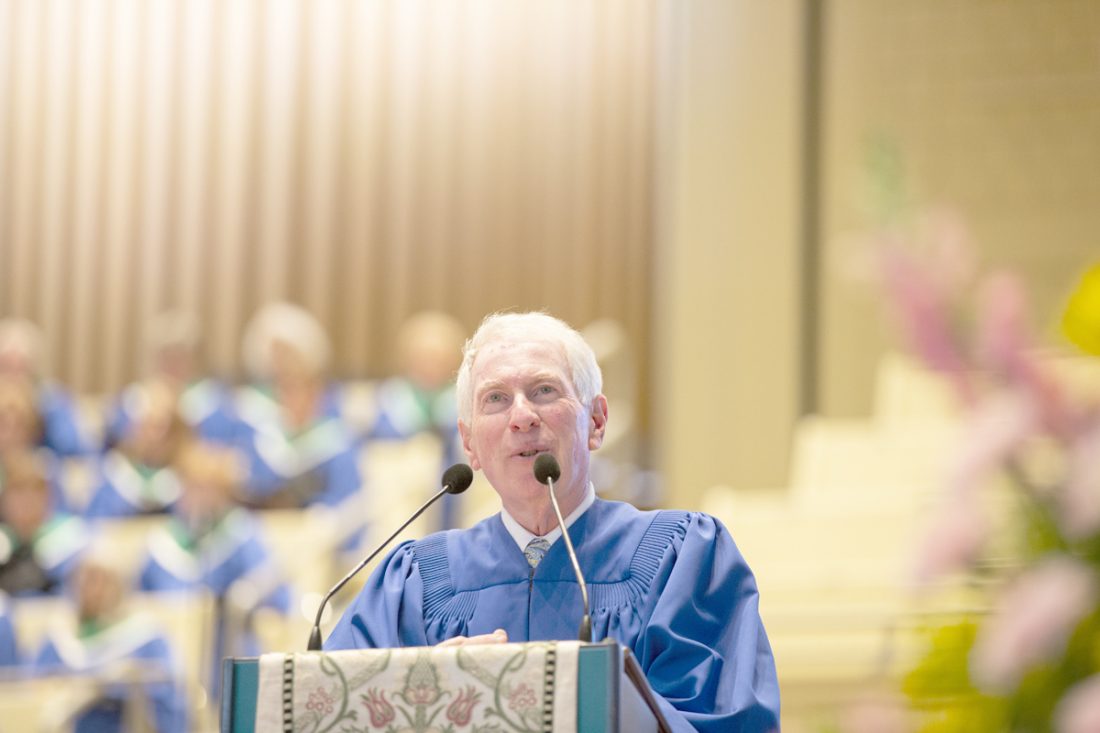 Jacobsen was the operator and guardian of the iconic Massey Memorial Organ that he often played inside the amphitheater. Photo by Mhari Shaw/The Chautauquan Daily

“Many have described Jared and the music he masterfully created with the iconic Massey Memorial Organ at the Chautauqua Amphitheater as the ‘heart and soul’ of Chautauqua,” Hill said.

“This sentiment speaks not only to Jared’s talent, but of his ever-presence during our summer assembly season, his untiring love for music, and his generous willingness to share his passions with Chautauquans across generations.”

Jacobsen graduated from Girard High School in 1967. According to his biography on the Girard School District Foundation’s website, Jacobsen began his musical career at the age of 5 as a piano student at the institution and had returned every year since.

Jacobsen began his church music career at the age of 13 as organist for the Grace Episcopal Chapel in Fairview, Pa.

He was the primary operator and guardian of the 112-year-old Massey Memorial Organ, located in the Amphitheater and considered the centerpiece of Chautauqua’s programming. He also shepherded the 50-voice Motet Choir for daily worship services and the 150-voice Chautauqua Choir for Sunday morning and evening worship; played weekly recitals on the Massey and the 1893 Tallman mechanical-action organ in the Hall of Christ; and appeared frequently as soloist with the Chautauqua Symphony and Music School Festival Orchestras.

The Rev. Becky Spanos is a member of Motet Choir and knew Jacobsen for more than 25 years. She said she was shocked to learn of Jacobsen’s death.

“Total shock, so shocked and total grief,” Spanos said of her first reaction.

Spanos said Jacobsen’s quest for perfection made the choir a better group. She pointed to his passion for music and theology as reasons he made a great leader.

“We were a fairly large choir,” she said. “He gently led us down the path of perfection. … He was very perfectionistic, which is hard to do with a group that size with many different vocal sounds. There’s no doubt about it, he made us better.”

The Massey Memorial Organ underwent various renovations and repairs throughout Jacobsen’s career. The primary company that worked on the famous organ was Paul and Mark Fischer Organ Company.

Paul Fischer told The Post-Journal that he “never met a truer gentleman” than Jacobsen in his 65 years in the pipe organ industry. Twenty-five of those years, Fischer said he worked with Jacobsen that allowed the two to share the “most pleasant symbiotic relationship.”

Fischer and his son, Mark, most recently restored the organ in 1993. More repairs were completed by Organ Supply Inc. ahead of Chautauqua’s 2019 season.

“I would go as far to say that my relationship with him in those 25 years was the highlight of my own career,” Fischer said.

When not at Chautauqua during the summer months, Jacobsen served as director of music for First Lutheran Church in downtown San Diego, and as a member of the performing arts faculty of The Bishop’s School, an independent college-preparatory middle and high school in La Jolla, Calif.

Nasibyan, who described Jacobsen as a role model, used to frequently attend Chautauqua when he was younger. Now, the 25-year-old, who was initially shocked by the news, can’t help but wish he could speak to Jacobsen one more time.

Nasibyan is now the music and choir director at St. Thomas Apostle Church in Corry, Pa. His career path was certainly cultivated by Jacobsen’s influence, he said. The two spoke by phone a week ago creating tentative plans to reconnect next summer.

“I would have loved to sit and talk with him for an hour. That would’ve been great,” he said. “It’s shocking. It’s unbelievable. Who would think that this could happen?”

As a child, Nasibyan would often attend the Massey Organ Children’s Encounter in the amphitheater. There, children were given a tour of the organ, provided background information and were even allowed to play on the instrument by Jacobsen himself. Nasibyan would let all the other children go first, ensuring he would go last and have an extra minute to play with the esteemed organist watching.

Nasibyan said he would often go home to perform on a piano in front of his grandmother, pretending it was the Massey Memorial Organ and that he was Jacobsen.

“I wanted to be just like Jared when I grew up,” the pianist said.

A memorial service honoring Jacobsen will be held at Chautauqua at 11 a.m. Friday.