Deputy Steven Dombek, pictured at left, and Sgt. Andrew Rozler of the Cattaraugus County Sheriff’s Office were awarded the Golden Dog Tag Award by the Jamestown Vietnam Veterans Association, Chapter No. 865, at a special ceremony Saturday. The pair was recognized for helping a veteran in May 2018 who was found mentally distraught. Photo by Daryl Simons Jr.

The deputies who assisted the veteran were recognized earlier this year with the Meritorious Service Award by the Cattaraugus County Sheriff’s Office. Pictured are members of the Jamestown Vietnam Veterans Association. 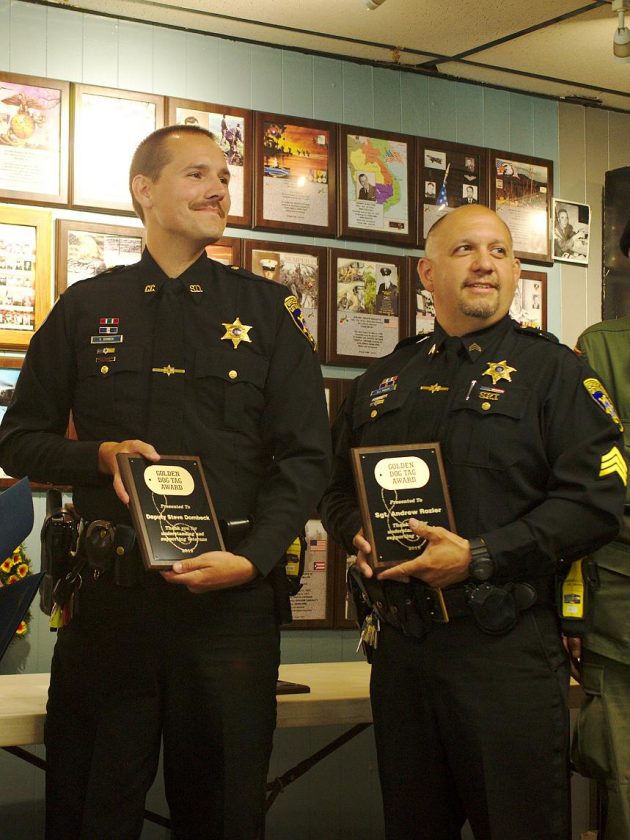 Deputy Steven Dombek, pictured at left, and Sgt. Andrew Rozler of the Cattaraugus County Sheriff’s Office were awarded the Golden Dog Tag Award by the Jamestown Vietnam Veterans Association, Chapter No. 865, at a special ceremony Saturday. The pair was recognized for helping a veteran in May 2018 who was found mentally distraught. Photo by Daryl Simons Jr.

“Sometimes you run into good people who were just having a bad day. And at the end of the day, he was a hero. He saved lives,” Sgt. Andrew Rozler said of the veteran they encountered on Route 242 in the Cattaraugus County town of Machias last year.

The Jamestown Vietnam Veterans Association awarded the Cattaraugus County sheriff’s deputies who aided the mentally distraught veteran with the Golden Dog Tag Award. The ceremony was held Saturday at the association’s location on Bigelow Avenue.

“It is outstanding to be recognized like this,” Rozler said, “and for these veterans to want to recognize us like this, it is just an outstanding honor.”

Rozler, Steven Dombek and Hanz Heineman were also recognized earlier in 2019 with the Meritorious Service Award, which previously had only been handed out 13 times over the 202-year history of the Sheriff’s Office.

The Jamestown VVA reached out to the department wanting to get in touch with the deputies’ supervisors to recognize them locally. 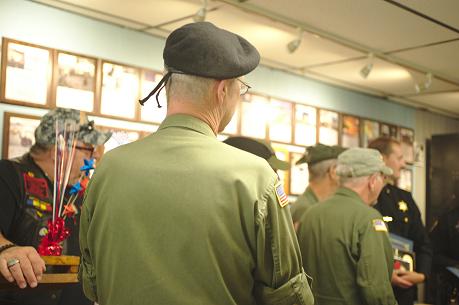 The deputies who assisted the veteran were recognized earlier this year with the Meritorious Service Award by the Cattaraugus County Sheriff’s Office. Pictured are members of the Jamestown Vietnam Veterans Association.

“Dombek came in contact with a combat medic who was in duress,” Rozler said of the May 7, 2018, incident. “He was heavily armed, (and had a) cache of weapons in his vehicle. He was manic, and having some emotional or mental issues going on. He had served in the army for 17 years, originally from New Hampshire. And he had been a police officer prior to that as well.”

The driver, in his mid-30s, had been reported as acting strange, with Dombek thinking that it was a drunken driving situation at first. But after watching the man’s behavior — of him being on his knees and chanting — Dombek realized that it may be much more than that.

Rozler said the mental health training had helped the deputies handle the situation.

“Sheriff Whitcomb is very knowledgeable on PTSD and sends us to a number of schools that teach about people in crisis,” Rozler said. “It has really paid off, because many people who are in crisis are behaving differently than those who are criminals. Being able to recognize that is important. … We don’t know all the answers, but we know where to go to get help.”

Dombek added, “We have come a long way in law enforcement with knowing to help people in crisis. We do a lot of mental training in the academy. Once we get out of the academy, we still have continuing education training through our department, which is fantastic.” 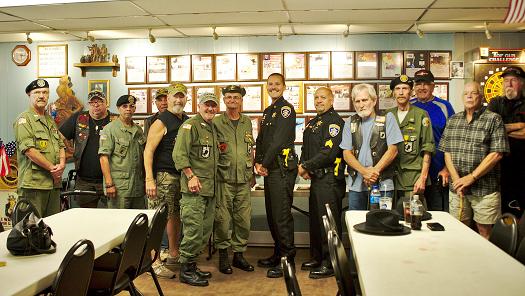 After searching the vehicle, the officers found between seven and eight different types of weapons — from handguns, ammunition and military camping gear. The veteran had served tours in Iraq and Afghanistan as a combat medic; he had been injured by IEDs (improvised explosive device) twice.

“There was a struggle for the handgun that he had in his front pocket, but we got him into custody,” Rozler said. “Some of the terminology that he was using was military, some was law enforcement. From that point, we recognized that he was probably both.”

The veteran in the truck didn’t know where he was. He had left his house about a week earlier to get gas, and apparently went to the Carolinas. On his way back to New Hampshire, he ended up in Cattaraugus County.

“He is now back in New Hampshire with his wife and two kids,” Rozler said. “We set him up with our DA, and got him the help that he needed. He is back to living a fine, normal life. Steve did an outstanding job recognizing this, that there were some things going on with this man, and called for help.”

“To come from veterans that were in the military, and because of their sacrifice, we are all doing what we do … at the end of the day, these are the real heroes. Their sacrifices have enabled us to do what we do,” Rozler concluded.