Pictured are Mayville Mayor Ken Shearer, Mayville village historian Devan Taylor and Chautauqua Town Supervisor Dan Emhardt at the site of a new historic marker noting the former crossing of the Pennsylvania and Jamestown Westfield and Northwestern railroads in the town of Chautauqua. An MX Tower was used at the location until 1978. P-J photos by William Mohan

The marker noting the location of the former large ice house that began shipping ice in 1871.

Pictured is the Jamestown, Westfield and Northwestern Railroad Control Tower as shown from the east side in 1943, the final year it operated. Photo by Bertrand Taylor

The crossing area with a waiting station. Photo by the Chautauqua Township Historical Society 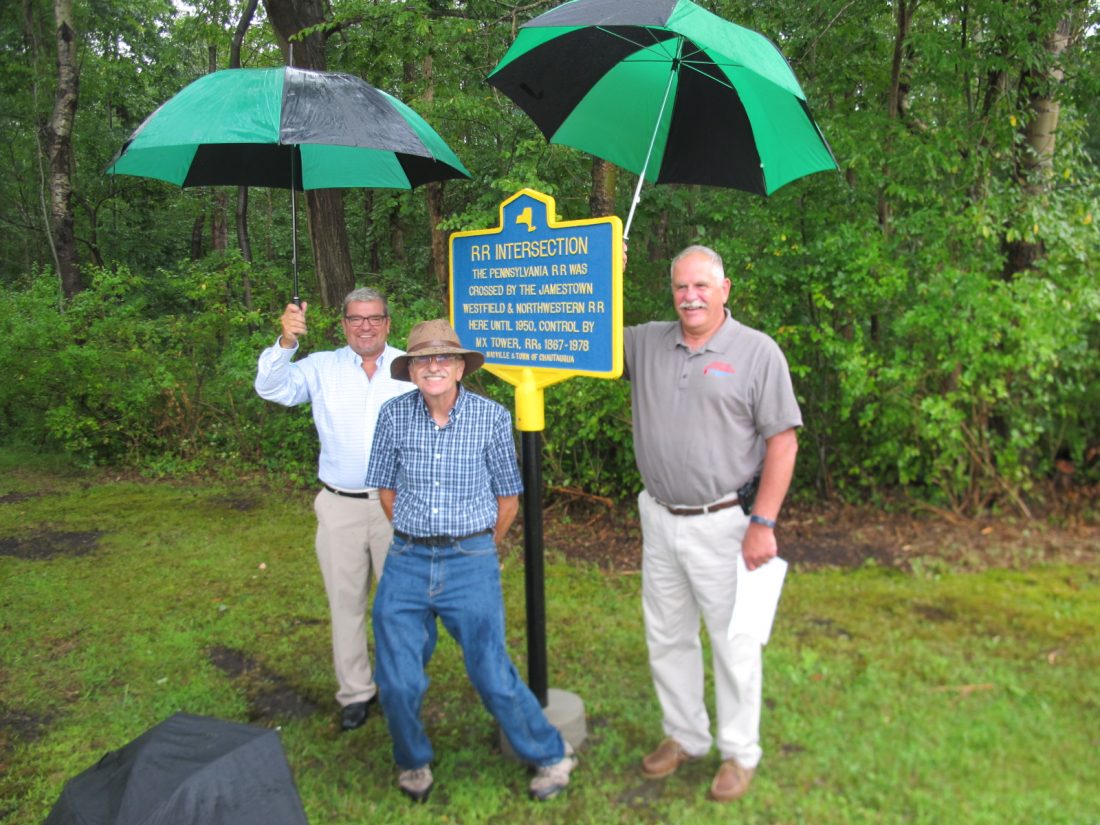 Pictured are Mayville Mayor Ken Shearer, Mayville village historian Devan Taylor and Chautauqua Town Supervisor Dan Emhardt at the site of a new historic marker noting the former crossing of the Pennsylvania and Jamestown Westfield and Northwestern railroads in the town of Chautauqua. An MX Tower was used at the location until 1978. P-J photos by William Mohan

MAYVILLE — Two new historic markers were recently dedicated in the village of Mayville. The signs honor both the former commercial lake ice harvesting and shipping industry, and former railroads that dominated transportation in the region.

The push for the recognition was, in part, due to village historian Devon Taylor and the Chautauqua Township Historical Society. Village officials say they hope the markers will further preserve local history and provide an educational opportunity.

“Working with Devon has been a real pleasure,” said Mayville Mayor Ken Shearer. “His dedication to seeing that the history of Mayville has a permanent presence has been second to none. It is vital that as we move forward, we do not forget our past.”

“This historical marker provide awareness in the community of this part of our fascinating awareness projects already in place,” he continued. “On behalf of myself and the entire Mayville Village Board, I would like to express public appreciation to Devon and the board of the Chautauqua Township Historical Society, which continues to recognize the importance of preserving our local history.”

Taylor said his love of history began at an early age and grew as an adult. 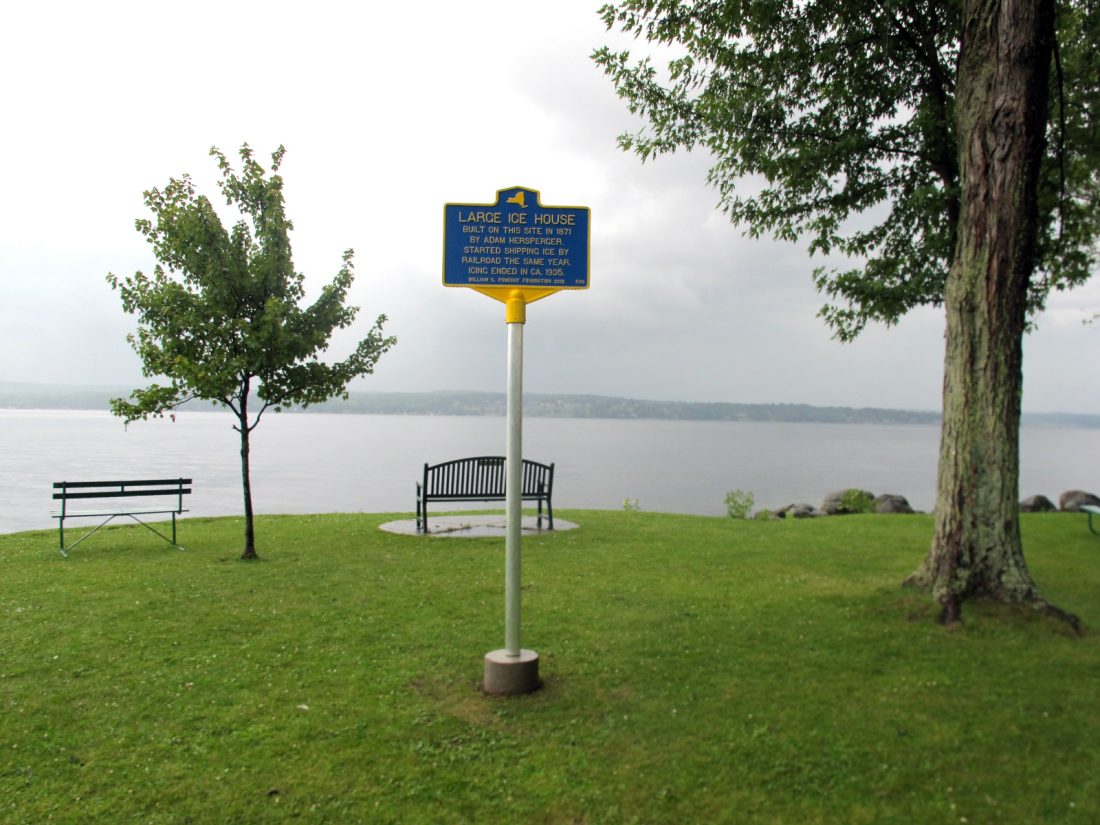 The marker noting the location of the former large ice house that began shipping ice in 1871.

“In my 30s, I grew increasingly interested in local history, how various industries had shaped Mayville and the growth that took place because of them,” Taylor told The Post-Journal.

Taylor started writing on the history of the Mayville area, using photographs he had obtained from family members. He was asked in 1991 to become the village historian, a position he still holds today.

“Research into the area past led me to understand how important the coming of the railroad to Mayville in 1867 was in business and growth here,” he said. “The ice houses that cut lake ice, stored it and shipped it by railroad were once a large employer, and five of them were located in Mayville.”

The first marker, located in Lakeside Park in Mayville made possible by a grant from the William G. Pomeroy Foundation, is a nod to the former large commercial lake ice harvesting and shipping industry from 1871 to 1935, as well as Adam Hersperger, the man who started it locally. According to Taylor, the Lakeside Park property formerly belonged to the Chautauqua Lake Ice Company. The village purchased the property for a park in 1934 for $6,500. 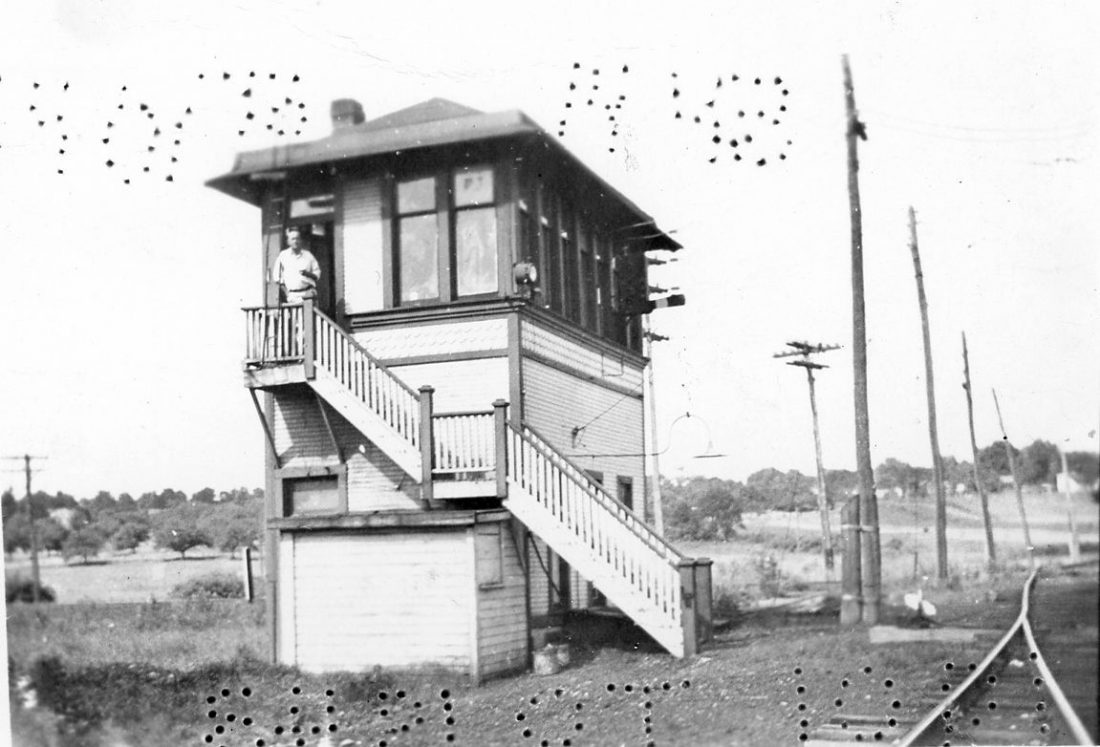 Pictured is the Jamestown, Westfield and Northwestern Railroad Control Tower as shown from the east side in 1943, the final year it operated. Photo by Bertrand Taylor

The first large scale ice house that shipped ice by railroad cars on Lake Chautauqua was built by Hersperger in 1871. He was born in 1820, and came in 1870 to Mayville, where he established the Chautauqua Lake Ice Company, being the first man to put up ice on Chautauqua Lake.

He conducted the business until about 1888, when it was consolidated with four other companies, forming the Consolidated Ice Company Inc. He married Sarah Sidney Stratton, a native of Pittsburgh, and his death occurred April 5, 1895, his widow surviving until October 1902.

The original ice company buildings were partly destroyed by a windstorm in 1916, and the rest burned down in a 1920 fire. Five other ice houses would exist in the Mayville area, and icing would continue until 1935 with no lake ice harvested in 1934. The final lake ice harvest was done at the Mayville Ice Co., also known as the Fischer Ice house on what is now the corner of Sea Lion Drive and Bird and Tree Road. 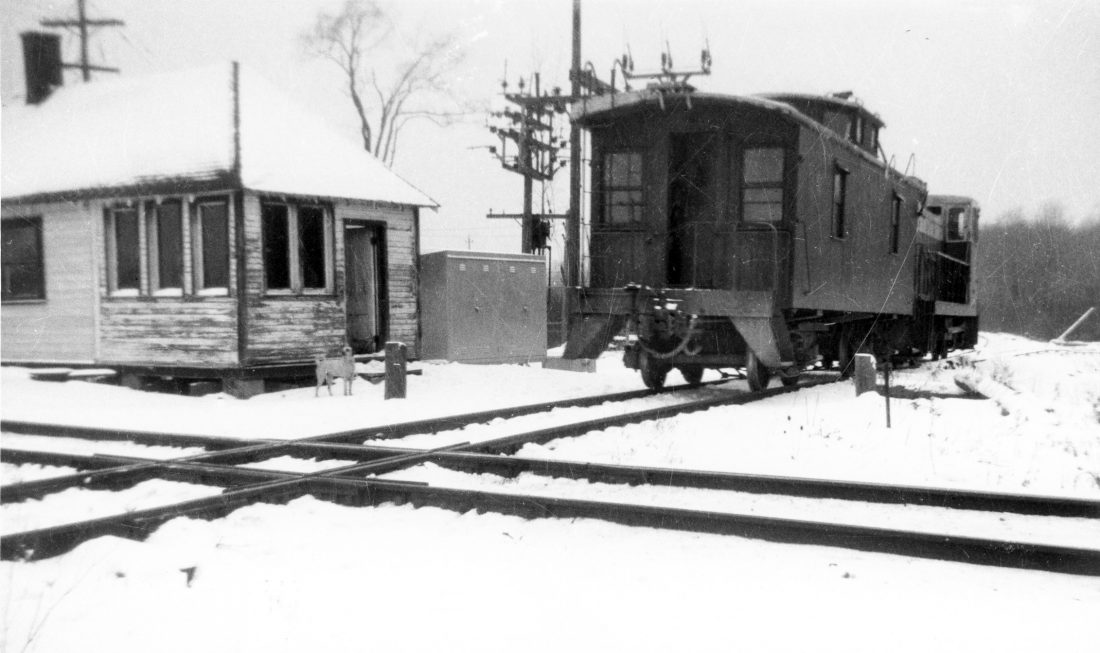 The crossing area with a waiting station. Photo by the Chautauqua Township Historical Society

The J.W.& N.W. started as the Chautauqua Lake Railroad in 1887 and ran from Jamestown to Mayville where it connected with the other railroad. An extension to Westfield and Barcelona was completed in 1902 and was known as the Jamestown, Chautauqua and Lake Erie railroad.

Taylor said railroads in its early days provided inexpensive and easy shipping access to the area and provided the means for “development to surge.”

The railroad was sold at auction early in 1913 and was purchased by the Broadheads of Jamestown. They renamed it the Jamestown, Westfield and Northwestern Railroad, and made it an electric trolley line in 1914. It went out of business on Jan. 21, 1950.

The Pennsylvania railroad started service from Oil Creek through Mayville to Brocton in 1867 as the Buffalo and Oil Creek Cross Cut Rail Road. It lasted until Dec. 29, 1978, when a final train ran from Corry, Pa., to Mayville and picked up one final load of furniture of Kling’s furniture factory.

Taylor said the railroad made inexpensive and easy access to and from Mayville possible with the result that the area began to expand and develop rapidly. It also made large scale ice harvesting and shipping possible.

“Railroads were extremely important in the development of the upper lake area,” Taylor said. “They provided transportation for both commercial industry and passengers for the tourist industry. It operated under a number of different names. It was best known as the Pennsylvania Railroad after June 1, 1900. That wye enabled engines to come in turn around and for freight cars to be exchanged between the two railroads. The control tower (MX) contained 33 levers and operated signals 350 feet from the switches at the end of the wye and each side of the main crossing.”

Don Emhardt, Chautauqua town supervisor, praised Taylor’s work to recognize both former industries that defined the town of Chautauqua and village of Mayville.

“Thanks to Devon, the town approved these and I think it is a great step because of the fact I am deeply tied to the JW&NW,” Emhardt said.

Emhardt explained that when his family moved to Jamestown in the late 1800s, his grandfather worked for the railroad.

Taylor published a book, “A View Through Time” in 1993. Local history, notably on the ice harvesting and shipping industry, is included in the book.

“I feel that it is important to know about the past, how things are interrelated and how things change over time as it can also help understanding of what may happen in the future and why,” Taylor said. “The historic markers are a way of informing the public about the past and possibly sparking an interest in history. I look for historic markers when I’m traveling and have found that others do too.”

William Mohan contributed to this story