Irwin Cotler was the recipient of the Joshua Heintz Award for Humanitarian Achievement. P-J photo by Daryl Simons Jr.

Samite performing one of his songs on his flute at the 13th International Humanitarian Law Roundtable. P-J photo by Daryl Simons Jr.

Samite in conversation with RHJC co-founder, Gregory L. Peterson. This was a presentation of “Samite: A Story of Resilience”, which featured much of his life story, along with some videos displaying his organizations work. “Resilience” is also the title of his new album. P-J photo by Daryl Simons Jr. 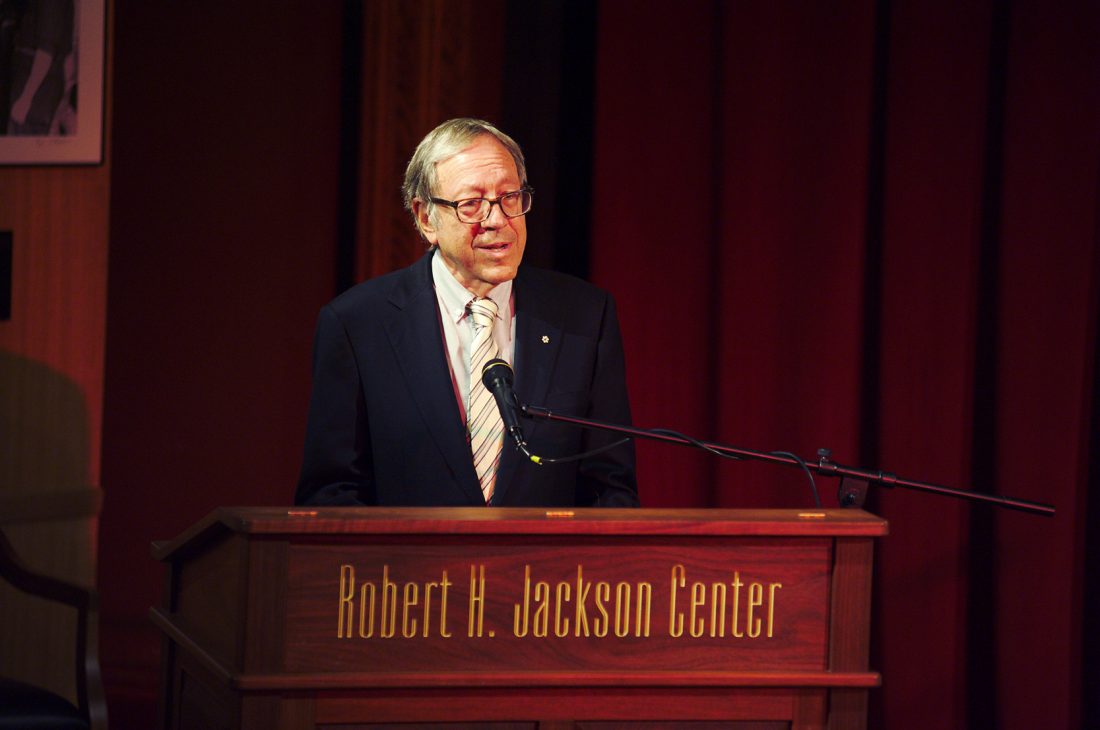 Irwin Cotler was the recipient of the Joshua Heintz Award for Humanitarian Achievement. P-J photo by Daryl Simons Jr.

“What makes that genocide so unspeakable is not only the horror of the genocide itself, but that it was also preventable. Nobody can say that we did not know. We knew but did not act,” said Irwin Cotler, chairman of the Raoul Wallenberg Centre for Human Rights.

The Robert H. Jackson Center on Sunday awarded Irwin Cotler the Joshua Heintz Award for Humanitarian Achievement. Hosting the International Humanitarian Law Roundtable with a two-part program, a myriad of lawyers and others were in attendance.

The second half of the evening featured an interview and performance by internationally acclaimed musician and humanitarian Samite, “A Story of Resilience.”

Cotler previously served as Minister of Justice and attorney general of Canada and as a member of Canada’s Parliament. He served as counsel to Nelson Mandela, during his time of imprisonment. Being a longtime champion of human rights, Cotler spent most of his time speaking about the political prisoners being held in Saudi Arabia, along with genocides abroad.

“The foreign minister of Canada tweeted for the release of Samar Badowi (and her brother) from Saudi Arabia,” he said. “After her call, Saudi Arabia reacted with fury. … Not one democracy came to Canada’s defense. Two months later, we witnessed a brutal murder of Jamal Khashoggi.” 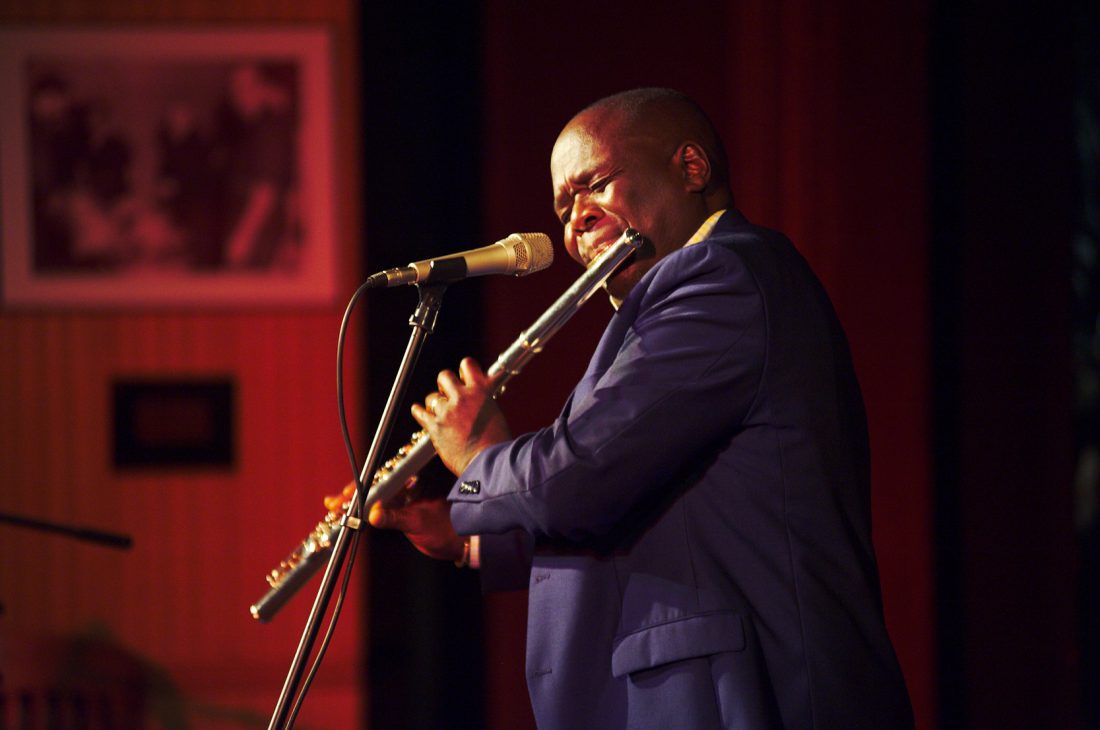 Samite performing one of his songs on his flute at the 13th International Humanitarian Law Roundtable. P-J photo by Daryl Simons Jr.

As of May 2018, numerous Saudi Arabian political activists have been detained arbitrarily, with a special focus on women’s rights activists. Cotler cited Badowi as an example, and her campaign to allow women to drive in Saudi Arabia. Following Canadian calls for release, the Saudi Arabia pulled their students back from Canada, and completely froze trade with them.

He added that, “these political prisoners are a looking glass into the resurgent global authoritarianism. And regrettably, the retreat of democracies at the same time.”

Cotler also expressed frustration over the recent appointment of Saudi Arabia to chairmanship of the G20 Summit.

“It is one thing to not hold Saudi Arabia sufficiently accountable,” he said. “It is another thing to reward impunity.”

Also a focus on Sunday was Samite, an internationally acclaimed musician who has performed solo with Paul Simon, and with other artists around the world. Early on, his musical roots were modest, though greatly inspired. 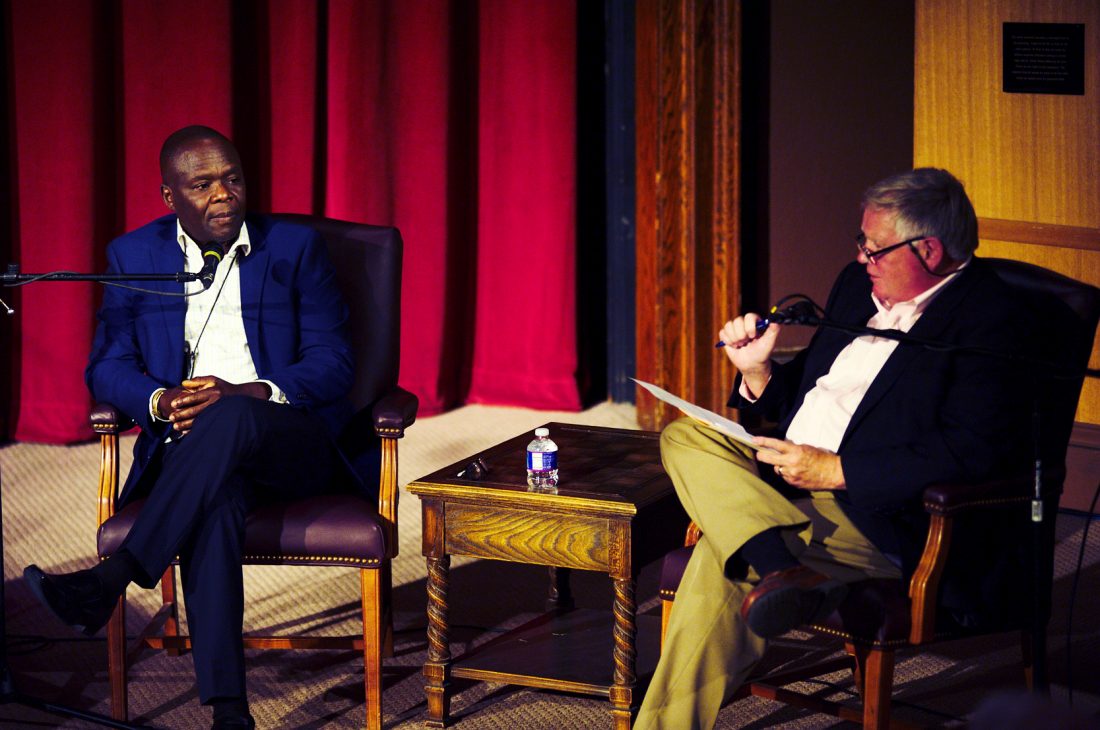 Samite in conversation with RHJC co-founder, Gregory L. Peterson. This was a presentation of "Samite: A Story of Resilience", which featured much of his life story, along with some videos displaying his organizations work. "Resilience" is also the title of his new album. P-J photo by Daryl Simons Jr.

Born in Uganda, Samite shared what it was like living there when the dictator, Ida Amin, had come to power. He said that before his reign, he had spent a lot of time with his grandparents. He reflected on the sounds from his childhood, coming from the forest, and the instrument that his grandfather loved to play.

“My grandfather would be playing his wooden flute, waking up the monkeys, the squirrels and everything else,” he said. “We hated the sound then because we had to wake up to. But it was very special looking back, with all of these beautiful sounds. But then when Ida Amin came to power, the music stopped.”

Following Amin’s arise, Samite said that there had been a lot of shooting, killing and kidnapping taking place all around. He said, “there was fear all of the time.”

His father and brother had been kidnapped during this time period. Following the days and months after Ida Amin had been removed from powers, circumstances only degraded further.

“People then realized that they could do what Ida Amin was doing,” Samite said.

Samite eventually fled the chaos in Uganda for Kenya, and eventually moved to, “the only place at the time that would accept refugees: the United States.”

A dire consequence of a country riddled in authoritarianism, war and conflict, was the prevalence of child soldiers. So, in 2002, he founded Musicians for World Harmony, an organization dedicated to enabling musicians throughout the world to share their music and promote peace, understanding and harmony among people. The specific focus of the organization was the rehabilitation of child soldiers.

“Music has the power to heal,” he said. “Even through the deepness of wounds.”

The program also helps out orphans who have been diagnosed with AIDS, as well as refugees. Recently, Samite discovered another use for his music.

He collaborated with filmmakers to create “Alive Inside,” an award-winning documentary on the power of music to awaken the memories locked away in patients with Alzheimer’s disease and dementia.

“It is a special pleasure and privilege working alongside those who are at the forefront of justice. Who are underpinning the community of democracy. Who are combating the impunity in the resurgent authoritarianism that are bringing forth the release of these great, heroic political prisoners, whose struggle is for our common humanity and our shared case and cause,” Cotler concluded.