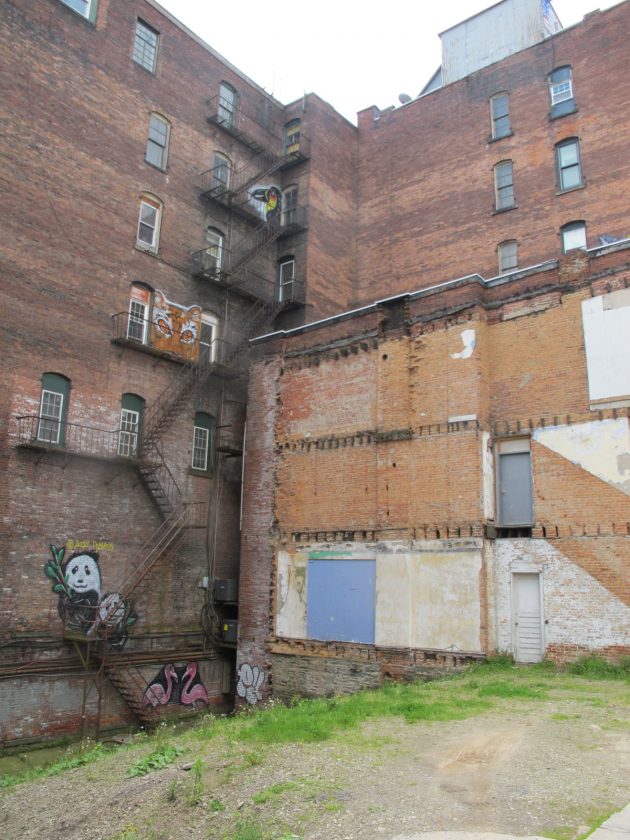 If the Jamestown City Council approves transferring property to the Jamestown Urban Renewal Agency, the building located at 8 E. Second St., which was once scheduled to be demolished, will be redeveloped along with the vacant parcel at 10-12 E. Second St. P-J file photo

Turning lots where demolitions once occurred into economic development projects was discussed by the Jamestown Urban Renewal Agency.

“We’ve received significant interest in the property,” he said.

During the JURA meeting, the board approved accepting the property from the city for the future development project. In May, the Jamestown City Council approved transferring 8 E. Second St. from the city to JURA.

The building located at 8 E. Second St. had originally been scheduled to be demolished because it was attached to 10-12 E. Second St., which was demolished in November 2016 following a partial roof collapse.

DeJoy, city development director, told the council in May because the building is in the Jamestown historic district it was determined by the state Historic Preservation Office during the state environmental quality review process that it is still a structurally sound building that shouldn’t be demolished.

DeJoy said the empty parcel where 10-12 E. Second St. was located will be donated to the city by the Chautauqua County Land Bank Corp.

In other business, the board approved accepting buildings located at 222 Winsor and 108 Crescent streets from Chautauqua County. Sam Teresi, Jamestown mayor, said the former residential properties will be demolished and the empty lots could be redeveloped.

DeJoy said 222 Winsor St. has already been demolished, which the city paid to have completed. He said 108 Crescent St. is undergoing an asbestos survey before it will be demolished. He added that county land bank will pay for the demolition of 108 Crescent Street.

DeJoy said the two properties are not connected, but are near each other. Along with another property still going through the transfer process, the three properties will be about one acre.

The board also approved a new contract with the Jamestown City Administrative Association (JCAA). The JCAA is made up of two unions, one that has 15 full-time, mid-level management employees and six JURA employees.

Last month, the Jamestown City Council approved the contract that is retroactive to 2017 and runs through 2021. The contract includes no salary increases for 2017, 2018 and 2019. The two bargaining units that have between 25-30 employees depending on the city’s budget, will receive a 2% pay increase in 2020 and 2021.

Parts of the new contract include adding an additional salary step for long-time employees while erasing a lower step in the pay scale. Teresi said the new contract’s salary agreement will have about a $10,000 impact on future city budgets.

Teresi said the contract is potentially changing the future of the city-owned health insurance plan, which will be better for taxpayers. He said the two units of JCAA are the first to agree that new employees, as of Jan. 1, 2020, will join a new hybrid health care plan and will no longer be on the city-owned health care insurance. He added the new plan has a higher deductible, but a lower employee contribution.

Also, current employees will have a choice to stay in the city-owned plan or to join the new hybrid system. Teresi said he believes some younger employees might opt for the new hybrid plan.

The new contract also has the stipulation that all new hires will no longer be part of the city-owned health care plan once they reach Medicare eligibility. JCAA employees will join American Federation of State, County and Municipal Employee (AFSCME) local 418 and the Civil Service Employees Association (CSEA) local 1000, who also have this stipulation in its last contract agreement.

As for the six city employee bargaining units, JCAA’s two units are the only ones under contract. The contract for AFSCME and CSEA expired at the end of last year. The city’s contract with the International Association of Firefighters Local 1772, which represents city firefighters, and the Kendall Club Police Benevolent Association, which serves almost all members of the city’s police force, expired at the end of 2015.