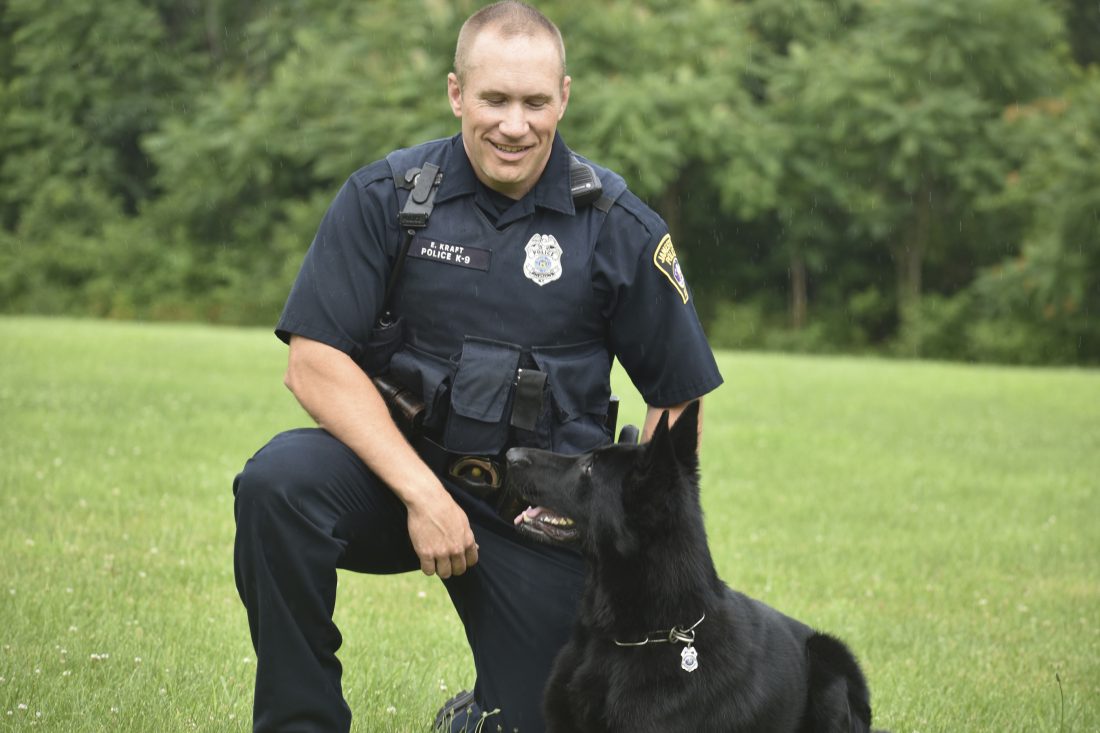 An eight-year veteran and highly decorated member of the Jamestown Police Department recently made his last collar, while a new hire is starting to grow into his.

K-9 Mitchell, a German shepherd who received the prestigious Police Cross and Medal of Valor after being wounded in November 2016 while helping to apprehend a murder suspect, has been retired from the department.

The dog’s handler, officer Erik Kraft of the Jamestown Police Department, said K-9s typically end their career after eight or nine years due to the constant rigors of training, patrolling and daily responsibilities within the community. K-9 Mitchell will continue to live with Kraft and his family in retirement.

“Being 9 years old and everything that he’s gone through, it was just time to retire,” Kraft told The Post-Journal last week at the firefighter’s training grounds on Harrison Street.

K-9 Mitchell received widespread attention after he was stabbed Nov. 15, 2016, during a confrontation with a man in the attic of a Jamestown residence. K-9 Mitchell, a member of the department since 2011, received injuries to his throat, jaw and tongue. He made a full recovery and was back on patrol within a month. 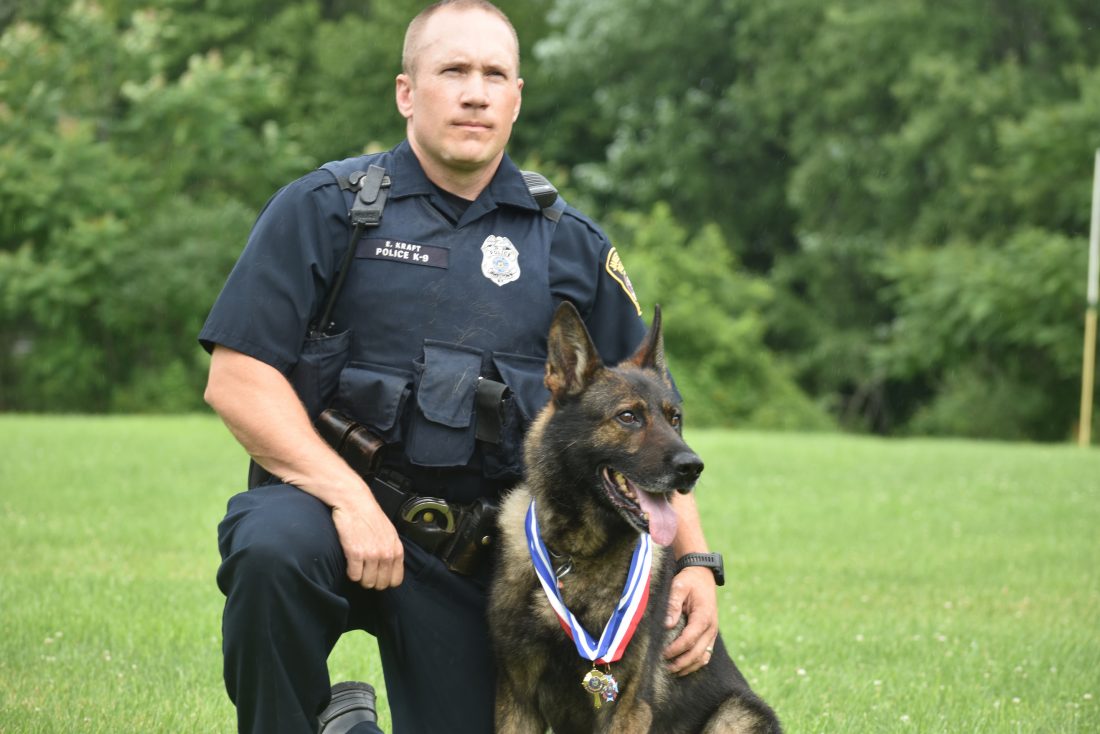 In January of the same year, then-state Sen. Cathy Young, R-Olean, introduced legislation, dubbed “Mitchell’s Law,” that would make it a felony to injury a K-9 in the line of duty. The legislation has yet to pass the state Legislature.

K-9 Promber is currently undergoing training for human tracking, having already gone through similar exercises for patrolling necessary for all K-9 units who ride with their handlers to a variety of situations and emergencies. Kraft said come fall, the German shepherd will go through narcotics detection training.

“The timing that we got (K-9 Promber) was the same time that Det. Steve Promber had passed away,” Kraft said, “and it was the right thing to do because Det. Promber was a narcotics detective with the department and was also a part-time member in Ellicott.”

The decision to name the newest member of the department after Promber was a group one, Kraft said. He noted that Promber was outgoing and “full of life,” traits he said he already sees in his new partner. 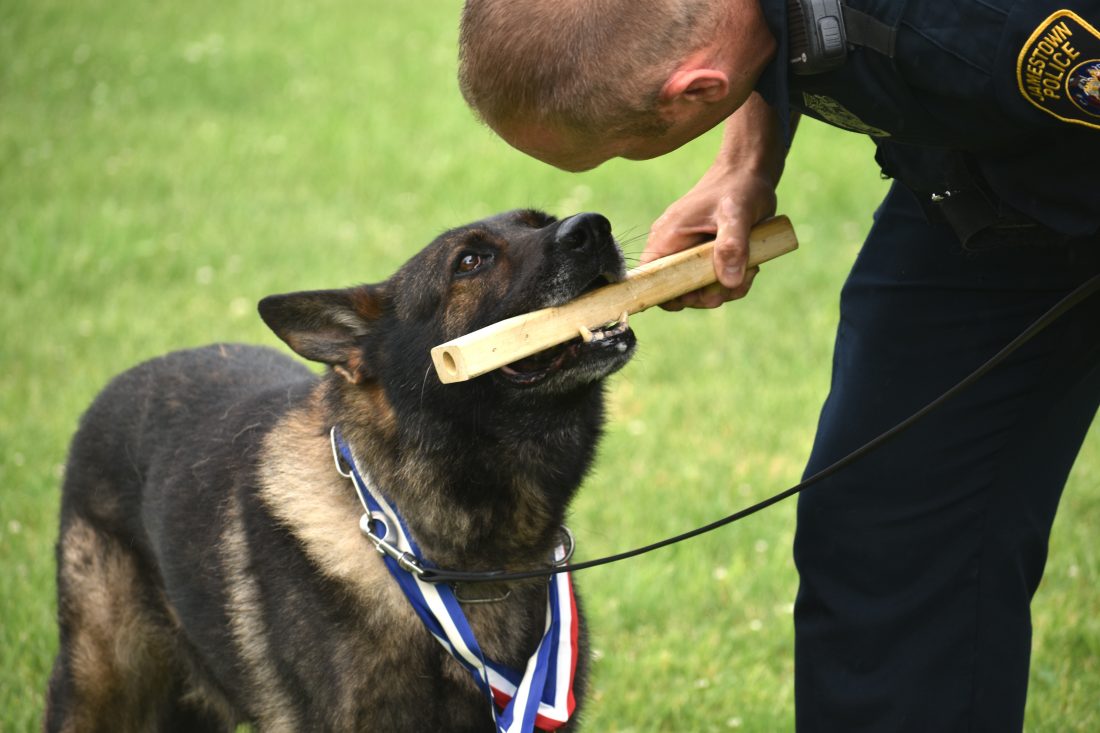 “You can just see it in his personality,” Kraft said. “He’s easy going yet hard working just like Steve.”

K-9 Promber, who will live with Kraft as did K-9 Mitchell when the pair worked together, is already active and on patrols.

The department purchased K-9 Promber with funds received through asset forfeiture and with money set aside for the K-9 unit, Jamestown police Chief Harry Snellings said.

The chief also recognized K-9 Mitchell for his years of service, especially after his recovery. “He’s had a long and storied career,” Snellings said of K-9 Mitchell. “He’s certainly going to be missed.”

Kraft said his former partner has truly become a member of his family. He recalled in the weeks after the stabbing in 2016 that K-9 Mitchell was upset at having to stay home and recover instead of going to work.

“These dogs are very loyal,” said Kraft, noting that he still thinks about that night in the attic. “I think about it every day. To be able to go back and do his job … waiting to put his life on the line, and just how quickly they bond with you, how loyal is that?”

K-9 Mitchell was awarded the Police Cross and Medal of Valor for his efforts, a recognition Kraft said are certainly the first in the county for a K-9 and possibly even in the state.