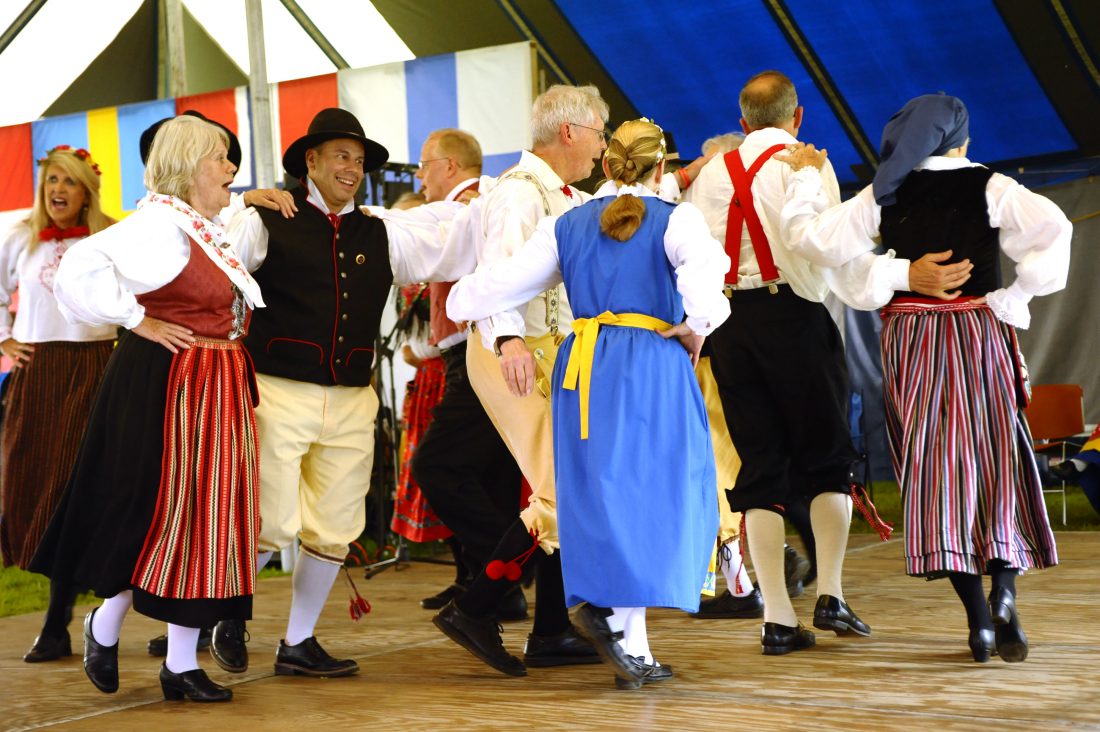 A little piece of Scandinavia was on full display at Jamestown Community College over the weekend.

“This whole event is just about celebrating our Scandinavian heritage,” said Don Sandy, event coordinator. “This was one of the major Scandinavian communities in our country. After Chicago and Minnesota, this was the main place for immigration from the late 1800s to the early 1900s.”

Located at the JCC campus in Jamestown, the Scandinavian Heritage of Northwestern Pennsylvania and Southwestern New York put together the event.

Some of the featured performers and guests of this years festival were: Swedish Meatballs, a band from the New York City area; Simple Gifts, a string duet from central Pennsylvania; Toronto Swedish dancers; Thule Swedish adult and children’s folk dance teams; The Probables, a rhythm-driven, folk and cana roots rock band; and a Viking Mixed Chorus.

“This might be our seventh trip down here. It’s just a nice little festival, everyone is so welcoming,” said Raul Selberg, leader of the Toronto Swedish Folk Dance Team. 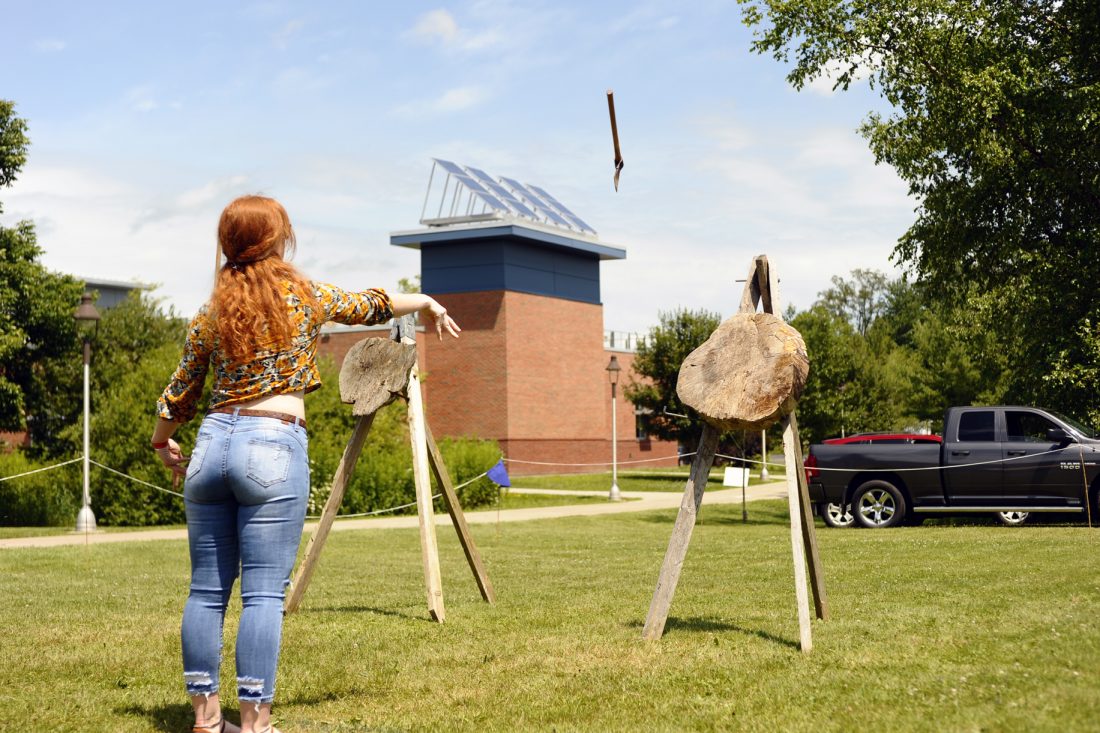 His group lead the Swedish dance around the Maypole to celebrate midsummer. A similar dance is done in winter, but it is around a Christmas tree.

As for food, the Korvburger was the feature, among lingonberry drinks, old Norwegian recipes for rice pudding, rotmos (Swedish mashed root vegetables), homemade rye bread, and of course, Swedish meatballs. Danish beer was also for sale.

“Korv has been around in Swedish history for a long time,” Kelly Kroon said. “It’s not quite a sausage or a hamburger. They bake the meat in tins, and slice it like meat loaf, serving it on rye loaf. Korv is a combination of pork, beef, onion, all-spice and salt and pepper. Traditionally, it is served with lingonberries and spicy brown mustard.”

The Viking ship by Leif Ericson Viking Ship Inc was again on display at the festival. They tour the ship to various Scandinavian festivals around the region, from Ohio to New York City. The ship had set sail into Chautauqua Lake on Friday, and went from Long Point to Bemus Point.

“This ship is a Schuta, the tethered boat behind the big ship. This would be used to fill out the coast,” Steven Clark said. 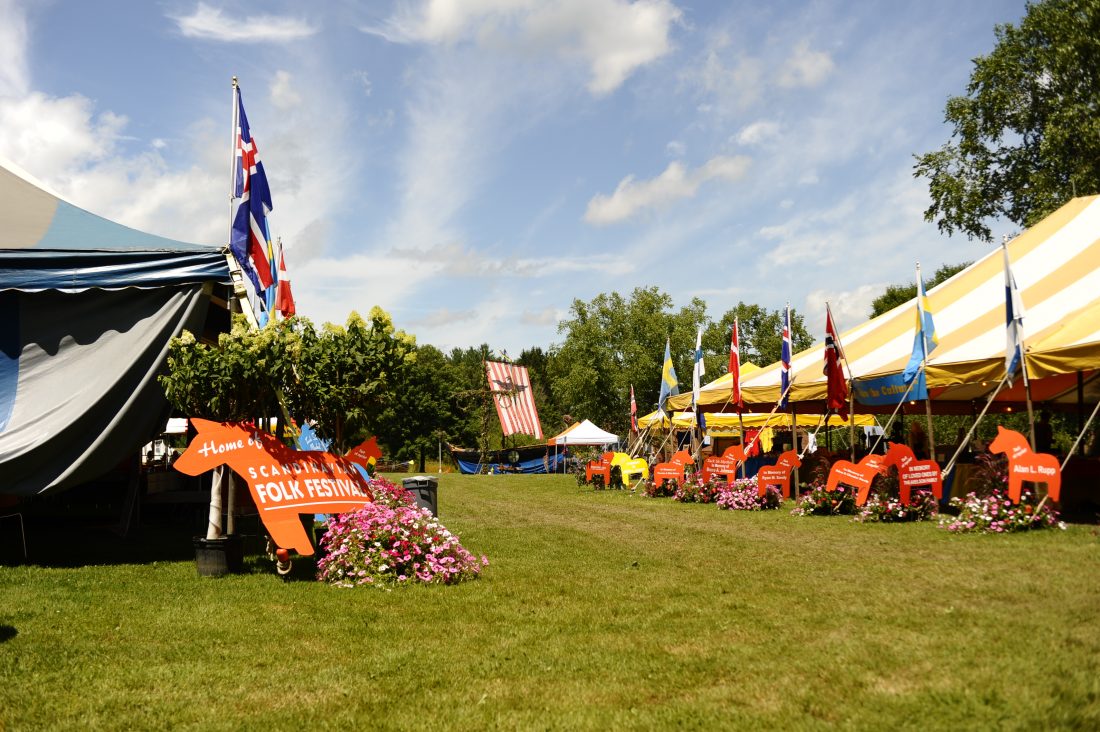 The wood on the exterior surface of the boat is sealed with a tree tar, smell is less abrasive than oil-based tar. The sail of the boat is consistently stretch out by adjacent wooden poles that cross the interior, projecting the edges of the sail outward. Wooden rungs line the sides of the ship, serving as a guide for the 10 oars.

“Each man would sit on his sea chest to row, keeping his personal belongings in there,” Clark said. “Which would include a fatted hide, and sealskin bag that was big enough to sleep in. It would also keep items dry that shouldn’t be wet.”

Next to the ship was a target range for traditional axe throwing. The instructor provided a basic lesson on throwing: Have a firm grip on the ax; do not snap the wrist; use a nice fluid motion when winding up; and release it just as the head of the ax is parallel with your head. The instructor emphasized that throwing is more about dexterity than it is about speed or strength.

Within the academic building, other Scandinavians cultural pieces were on display. Genealogy services and a few lectures were held each day on a variety of topics pertaining to relevant and historical culture put together by Dr. Julie Boozer.

Outside in the crafts tent, various Scandinavian folk costumes were on display, along with a large collection of Swedish dolls, baked goods, Swedish weaving, chip carving, spinning and Scandinavian needle arts.

“Thank you to our sponsors,” Gwen Axelson said. “Without their help and support, this festival would not be possible. … We had vendors coming from Norway, to Colorado, another from Virginia Beach. It is an all around fun and educational festival that we hope to bring to people for years to come.”