Astronaut Scott Kelly visited Chautauqua Institution providing details on his travels to space and wisdom on how it can impact people on Earth. Kelly most recently completed a year-long stint in the International Space Station in 2016. P-J photo by Jordan W. Patterson 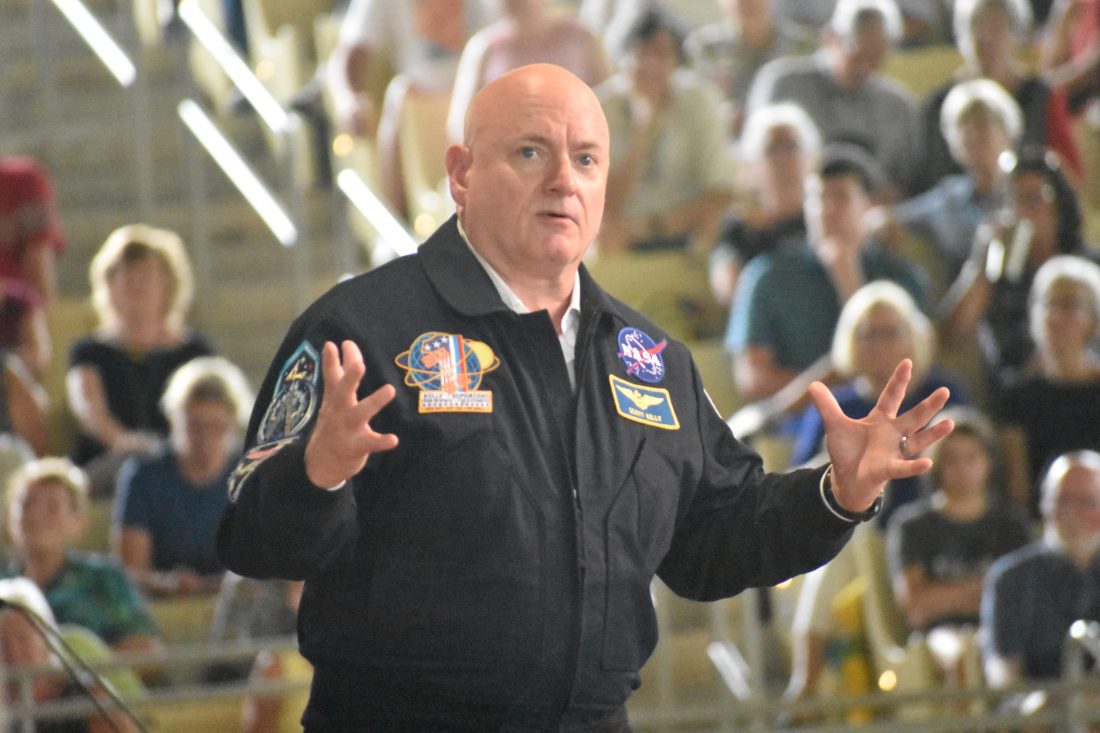 Astronaut Scott Kelly visited Chautauqua Institution providing details on his travels to space and wisdom on how it can impact people on Earth. Kelly most recently completed a year-long stint in the International Space Station in 2016. P-J photo by Jordan W. Patterson

CHAUTAUQUA – Scott Kelly said the experience of an “orbital perspective” changed his life after spending 500 days in space.

Kelly, a retired astronaut, has been to space four different times, once on a six-month mission and another for a year from 2015 to 2016.

Upon return from the 12-month space operation, he said taking a breath after landing felt like the first time he had ever inhaled fresh air. But while in space, looking down at the masses of land from a window in the International Space Station, he was inspired because he could not see any national borders like on a map.

“You see continents, you don’t see countries,” Kelly said to an audience at the Chautauqua Institution Amphitheater.

Kelly is the record holder for the single most accumulated number of days spent in space. He has also commanded three other NASA missions to the ISS. 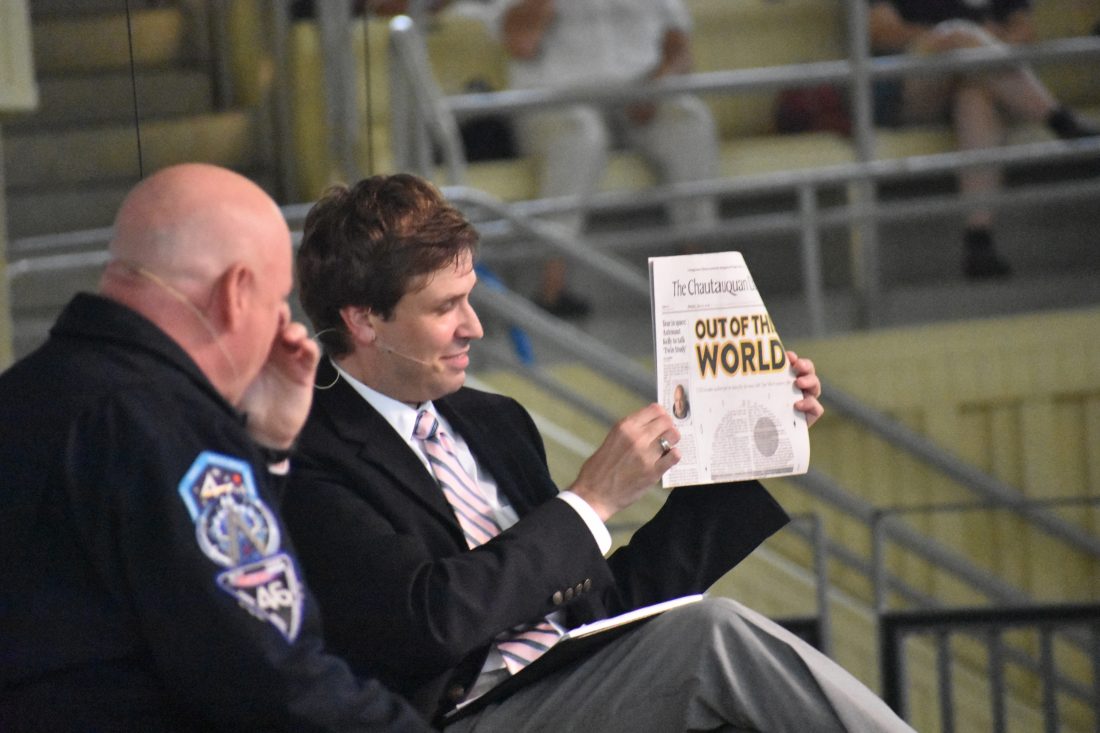 NASA also studied Kelly and his identical twin Mark’s genetics in an attempt to better understand the impact that space has on the human body.

A part from being a retired astronaut, he is also a retired U.S. Navy captain, a former military fighter pilot, a test pilot and an engineer.

He also authored “Endurance: My Year In Space and Our Journey To Mars,” a New York Times best-seller that has also been optioned as a movie by Sony Pictures.

Much of his lecture detailed his year-long mission around Earth’s orbit and his hope that mankind will reach Mars – a task he often described as “challenging.” Prompted by various audience questions, Kelly explained why he thought a manned mission to Mars was important.

“The other thing is we’re explorers,” Kelly said. “That’s part of our DNA. It’s part of who we are. I think history has shown us that societies that have stopped trying to explore, trying to understand what’s over the horizon, what’s next, are the ones that have ceased to exist.” 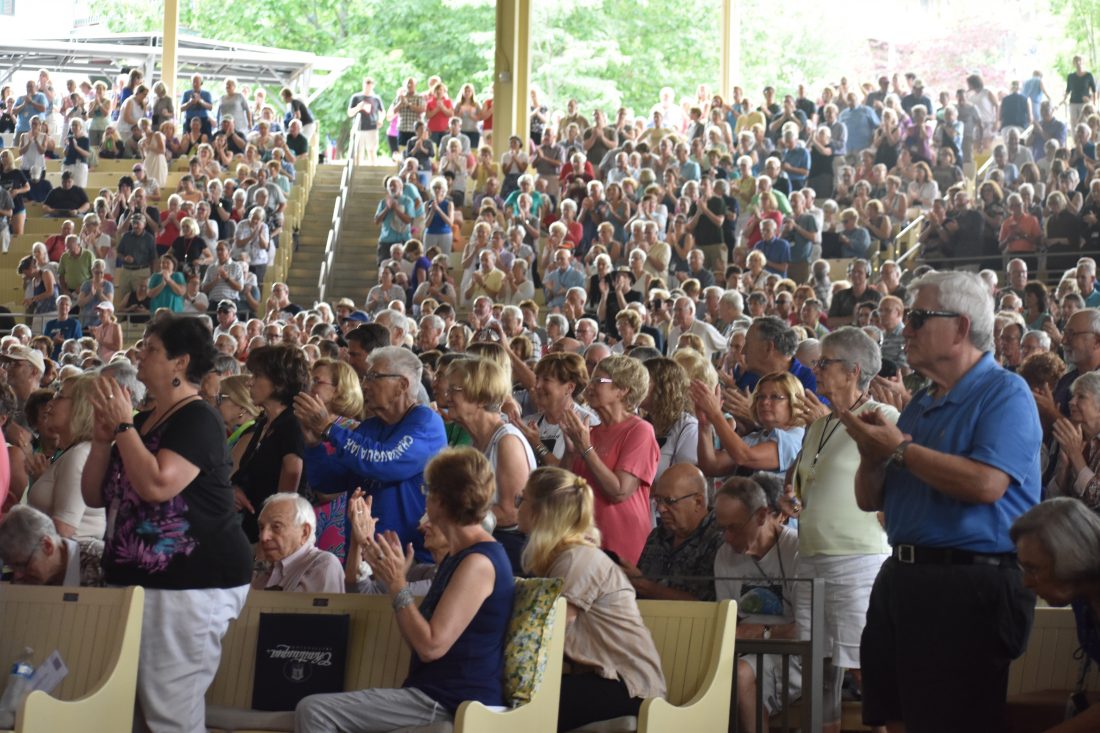 Kelly highlighted the importance of such a mission to Mars and previous missions like that of the Apollo program that took astronauts to the moon. He said the biggest challenge is to figure out how to withstand the effects of space have on the human body for trips into space that will last multiple years.

“Who gets to Mars first? I don’t care. I just want someone to get there,” he said.

He said NASA’s space exploration has not only advanced mankind’s technology, but it has inspired children to dream. He hoped a mission to Mars could do the same.

“That would be a wonderful thing,” he said.

During his lecture, he discussed the significant changes made to his perception of the world.

On stage, Kelly said the most fulfilling aspect of returning to Earth after months in space is knowing he had accomplished the most difficult task in his life – a part from seeing his family, showering, eating and experiencing gravity.

Kelly also said the ISS construction was one of the most difficult tasks mankind has ever completed. And yet, staring off down at the “beautiful” planet, he wondered how mankind could be so divided.

“It’s just hard to believe that we have so much potential yet we treat other people from other countries sometimes almost like they don’t matter,” he said. “And the way we solve problems is working together – not a part, not being divisive, but through team work.

“This orbital perspective I think gives you that,” he continued. “It changes your outlook on humanity. I think it makes the people who have the privilege of experiencing this more empathetic and more hopeful for the people, not only in this country, but around the world.”

Kelly remained optimistic that the world can make it to Mars. More importantly, after spending so much time in darkness of space, he was left hopeful of mankind on Earth.

Referring to the construction of the ISS he said, “If we can do this, we can do anything.”