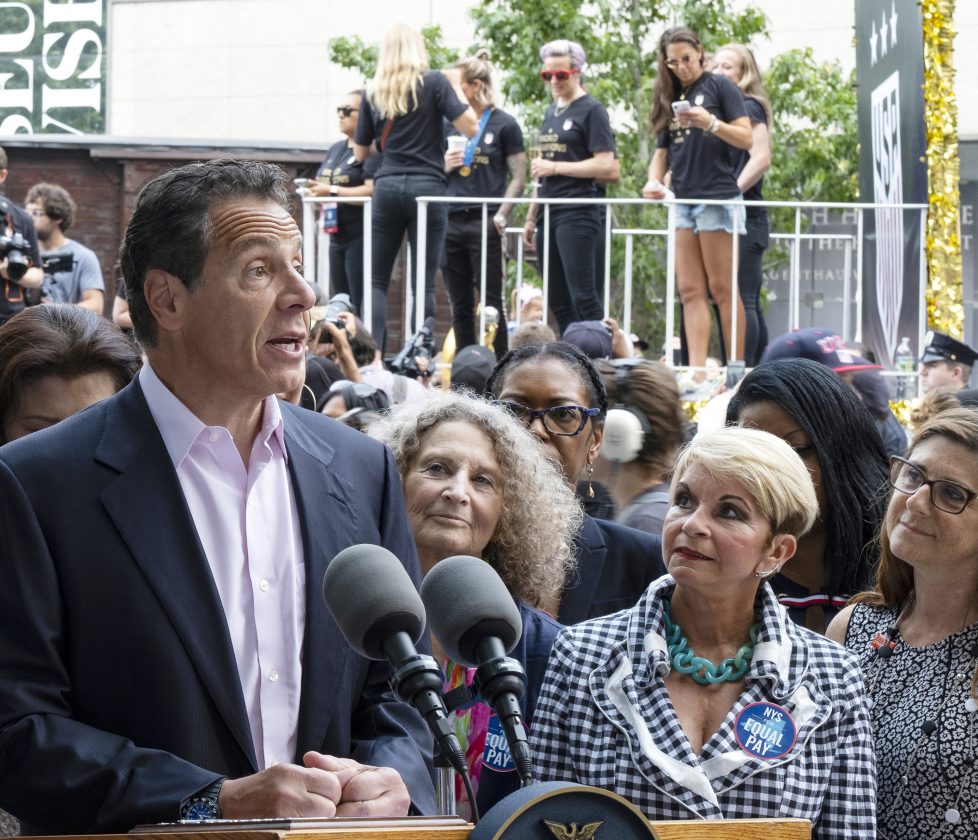 With members of the U.S. women’s soccer team in the background before the start of a ticker tape parade in their honor, Gov. Andrew Cuomo speaks before signing a bill into law Wednesday in New York. AP photo

Assemblyman Andrew Goodell, R-Jamestown, voted in favor of both pieces of legislation on the Assembly floor, as did Assemblyman Joe Giglio, R-Gowanda.

Goodell questioned Assemblywoman Karen McMahon, D-Williamsville, how the legislation was different from existing state law that makes it illegal for wage discrimination to occur in any New York state company based on sex. McMahon concurred with Goodell’s statement that the current law is limited to gender comparisons and does not include other protected classes as included in the Human Rights Law.

Goodell asked if the bill would change the standard for determining if there was a violation or simply expand the categories that fell under the definition of equal pay for equal work.

“We are changing the language to expand the existing pay equity provisions to require equal pay for equal work or substantially similar work when viewed as a composite of skill, effort and responsibility,” McMahon said, “and when performed under similar working conditions.”

That definition is the same standard used by the federal Equal Employment Opportunity Commission.

“I appreciate the clarification from my colleague,” Goodell said. “When we first reviewed this language there was a concern whether that language was intended to implement a comparable work standard, about which we’ve had extensive debates that have gone on for many, many hours. Upon further review it became apparent, at least to me, and as the sponsor has confirmed, that we’re not changing the standard upon which we make these evaluations. We’re merely picking up the language used by the federal EEOC in evaluating the federal standards for equal pay for equal work which reflect the fact that it’s not just the title that’s placed on a job category, it’s actually a substantive evaluation to ensure that equal pay is actually being paid for equal work. Based on that clarification, and I appreciate my colleague’s comments, I will be supporting this bill and recommending the same to my colleagues.”

“Earlier today we passed a bill dealing with the same subject as it relates to private sector,” Goodell said. “Now this bill would relate to state employees under civil service. In the earlier debate (Assemblywoman McMahon) indicated that the phrase substantially similar work when viewed as a composite of skill, effort, responsibility performed under similar working conditions and without discrimination was the exact same language that is used by the federal EEOC in enforcing equal pay for equal work. This is not a comparative work bill. It’s really an antidiscrimination bill.”

The bills were signed Wednesday and discussed by Gov. Andrew Cuomo when he spoke at a ticker tape parade for the world champion U.S. Women’s Soccer Team. He used the legislation as an example why the U.S. Women ‘s National Team should be paid the same amount as the men’s team.

“There is no rationale why women should not get paid what men get paid. These are women’s soccer players, they play the same game as the men’s soccer players, and they play it better — so if there is any economic rationale, the men should get paid less than the women,” Cuomo said. “New York will continue to lead the way forward and stand in solidarity with women and girls in every corner of this state. By signing this legislation, we are not only doing the right thing, we are also doing the moral thing and equal pay for equal work is now the law in the State of New York.”