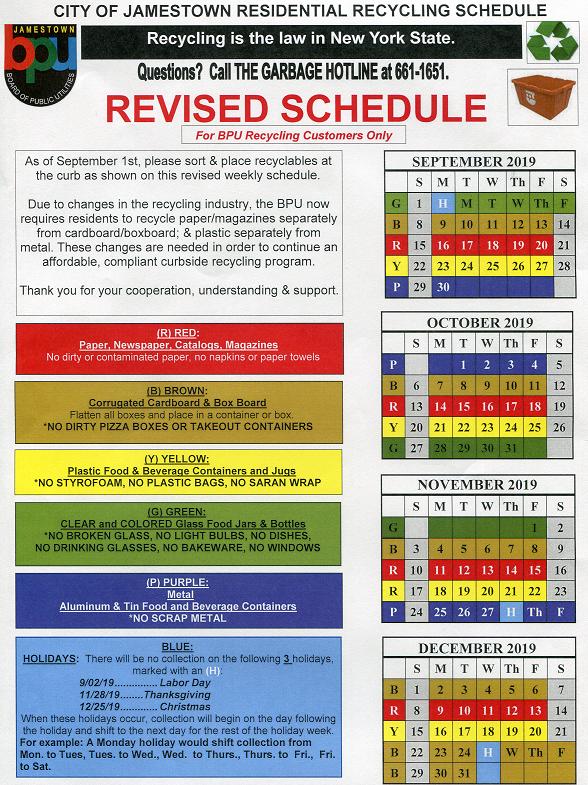 The new revised recycling calendar the Jamestown Board of Public Utilities will be mailing to its customers indicating the new single commodity recycling that will go into effect Sept. 1, if the board approves the change at its August meeting. Submitted photo

The Jamestown Board of Public Utilities will implement single commodity recycling this year.

David Leathers, BPU general manager, announced the decision during the BPU’s monthly board meeting Monday. The change will officially be voted on by the board at its next meeting Monday, Aug. 26, and, if passed, the change will go into effect Sept. 1. He said the BPU staff will work on relaying the message to its customers during the next six weeks, including mailing a new recycling calendar for the last four months of the year.

The change will mean that customers will no longer be able to combine paper and cardboard and plastic and metal into one recycling bin. The new calendar will now have five different colors to determine the item that will be recycled during the week instead of just three colors.

Last month, Leathers told the board about the possible single commodity recycling change that could be happening. He discussed the recycling challenges the city-owned utility company has been facing, which has been occurring worldwide since China in 2018 implemented its new policy that restricted the importation of foreign recyclables. He added that one example of the new recycling challenges the BPU faces is usually paying about $38 a ton to have paper and cardboard taken for recycling during recent months. In May, however, BPU officials paid $88 a ton.

The orange RFID bin program will remain in operation, with regular recycling customers receiving a discounted rate on their solid waste bills.

In a news release, BPU officials noted that regional recycling vendors face continuing challenges of where they can sell or disperse recyclables. As China has closed its doors to American recyclables — when it once took delivery of a majority of the U.S. recycling market — national and regional vendors are working to find outlets for its products.

These international recycling market changes mean that American vendors have had to restrict what recyclables they accept and in what combination they can economically process. For instance, BPU paper recyclables will no longer be received by our recycling vendors when mixed with cardboard and box board. While BPU garbage disposal costs currently are $28.50 a ton at the landfill, for example, fees for recycling of paper with cardboard/box board together fluctuate and recently have cost more than $100 a ton.

“We understand that recycling customers may be dismayed by recent changes in what recycling we can accept and in how we continue to collect it,” Leathers said.

“Please know that we are endeavoring to find options to keep recycling and garbage collection manageable and affordable for our residents. Affordable rates for our customers and reliable services are our highest concerns.”

The revised recycling calendar will be in effect from September through the end of the year. The amended schedule is also posted on the utility website at jamestownbpu.com on the home page and on the solid waste section. Calendars also are available in the BPU customer service office, located at 92 Steele St.

In other business, Kelly Hawkins, BPU finance and customer accounts manager, provided a half-year finance report to the board. She said the electric division through the first six months of the year has $2 million less in revenues than budgeted. She added most of this decrease is from off-system sales.

Leathers also announced that the BPU’s wellness program has been named by Business First first among 10 medium-size company competing in its Western New York 2019 Healthiest Employer contest. This is the second consecutive year the BPU has won this award. The program compared the BPU with nine other finalists in the medium-sized category for companies of 100-224 employees.