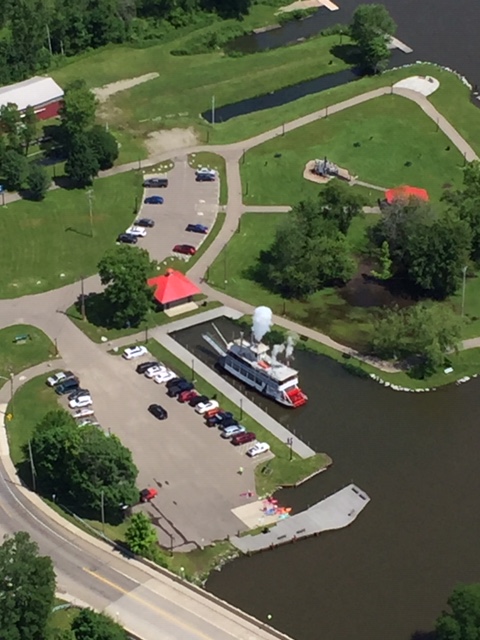 The Chautauqua Belle pictured at McCrea Point Park in Jamestown from the air. James Nohlquist photographed the steamboat while heading toward the Chautauqua County-Jamestown Aiport. Photo by Jim Nohlquist

The Chautauqua Belle, one of the last operating steamboats in North America, is certainly a sight to be seen at McCrea Point Park in Jamestown.

The same can be said from the air.

Jim Nohlquist, a native of Jamestown and current Greece, N.Y., resident, recently snapped several photographs of the Chautauqua Belle from the seat of his restored Aeronca Champion airplane.

Throughout the months of May and June and in September and October, the Chautauqua Belle will make round-trip passenger excursions on the Chadakoin River from the boat landing in Jamestown to the Chautauqua Harbor Hotel in Celoron.

In July and August, the Belle will be docked in Mayville to make trips along the northern part of the lake.

Nohlquist, a retired 27-year pilot of US Airways, said he was flying into the Chautauqua County-Jamestown Airport on Saturday when he spotted the steamboat at its city location.

“I wanted to fly over the city and saw the Chautauqua Belle. I thought ‘Wow, that looks amazing from up here,'” Nohlquist said.

The former city resident has a bit of history with the steamboat as well. He married his now former wife, Isabelle, on the boat in 1983. He said the two remain friends to this day.

“They had just started doing weddings on the Chautauqua Belle at the time,” Nohlquist said. “So that’s where we had it.”