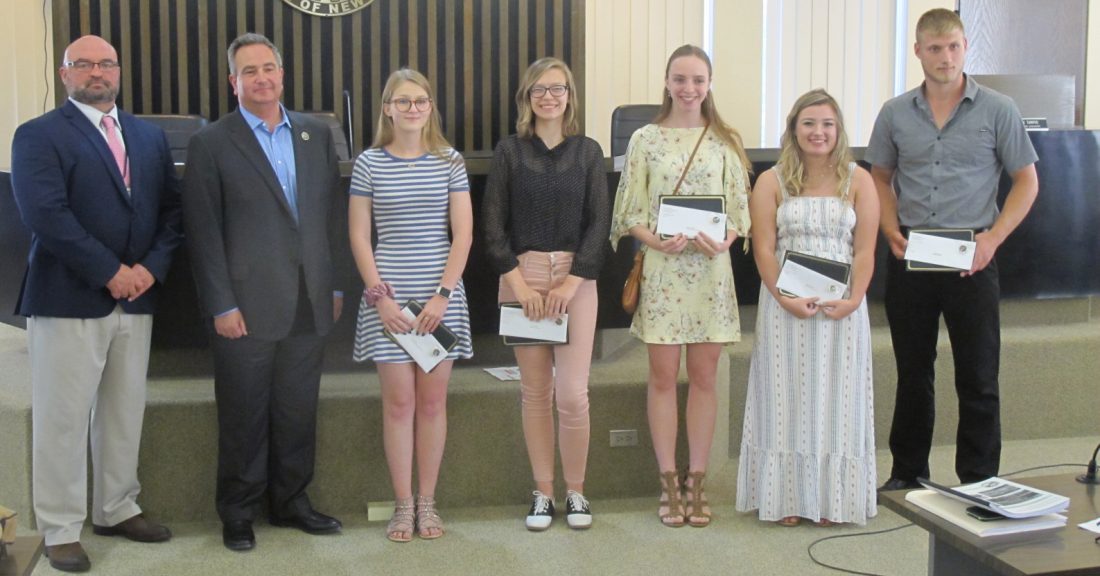 From left, P.J. Wendell, Chautauqua County Legislature chairman, and County Executive George Borrello are joined by five of the 19 valedictorians during the legislature meeting Wednesday. P-J photo by Dennis Phillips

On Wednesday, the legislature passed a resolution supporting a local subsidy by the county to support the return of the Essential Air Service subsidy from the U.S. Department of Transportation.

The U.S. DOT would like a 10% contribution to the annual $2,980,688 subsidy provided to the commercial air service provider for three years. The legislation approved states the county would fund $72,000 in cash and $52,000 through in-kind services as part of the local subsidy.

Last week during the legislature Public Facilities Committee meeting, Ron Almeter, county airport manager, said county officials will also be asking the business community to fund $75,000 in cash and $87,000 through in-kind services, which was not part of the resolution the legislature approved.

Last week at the same meeting, County Executive George Borrello said, at this time, there is no contractual commitment made by the business community to subsidize the airport. However, he said during a March meeting with 43 businesses and U.S. Congressman Tom Reed, R-Corning, there was local interest in bringing back commercial air service to the airport. He said county officials are still finalizing on how the business community would financially support the airport, but it would be similar to someone buying season tickets for a minor league baseball team.

Borrello said an example of an in-kind service would be the DoubleTree by Hilton Jamestown running a shuttle bus from the hotel to the airport.

On Wednesday, Robert Bankoski, D-Dunkirk, said it would be remiss if the legislature didn’t give the airport one last shot. However, he said if this attempt doesn’t work it will be the last time he approves financial support for the airport.

“If it does work it will be a revenue generator down the road,” he said.

Terry Niebel, R-Sheridan, said he asked why Boutique Airways will work as a commercial air service provider while others have failed in the past. Last week, Almeter said because they have a different aircraft, a better schedule and a business relationship with United Airlines that will allow passengers flying out of the airport to purchase only one ticket. He also said there will be an additional route to Baltimore Washington International Airport as well as the Pittsburgh International Airport.

Niebel also said this is the last time he will support the county airport if the new proposed commercial air service carrier, Boutique Airways, doesn’t pan out.

Mark Odell, R-Brocton, said Boutique has a 90 percent plus flight competition rate at other small airports.

Odell also said the $72,000 will be at no net cost to the county because it will represent the 2.5 percent the county lost in federal funding when it lost the Essential Air Service subsidy.

The resolution was approved 16-1, with Frank J. Gould being the only “No” vote.

In an unrelated matter to the resolution, but news for the airport, Rep. Tom Reed, R-Corning, announced three grants valued at $659,400 to provide the Chautauqua County-Jamestown Airport with funding to renovate and improve its facilities.

“We care about ensuring our friends and neighbors have access to reliable transportation,” Reed said. “This grant enables the Chautauqua County-Jamestown Airport to fund maintenance projects and ensure the efficiency of their operations. It is important that we invest in our infrastructure and we are pleased these grants will allow our the Jamestown Airport make necessary improvements to keep the facility in working order.”

Almeter said airport will receive three grants to complete three projects: comprising of maintenance of the primary runway, design of perimeter security and the design and construction of a primary wind cone.

“These three projects, as well as all other capital projects in the five-year airport capital improvement program are necessary for the maintenance of a safe and sustainable airfield irrespective of the presence of a commercial air carrier at the airport. As a regional general aviation airfield, Jamestown airport must meet high standards of safety for a wide range of aircraft types including privately owned recreational-use aircraft up to and including aircraft designed for commercial passenger operations,” Almeter said.

According to the resolution approved, $11,099 from the 3% occupancy tax reserve fund would be used to assist with the cost of printing the brochures.

The grant is effective from April 1, 2018, through March 31, 2023. The grant from the state Office of Indigent Legal Services is from a lawsuit known as the Hurrell-Harring Settlement Act that was brought against five New York state counties in Central New York for ineffective representation of the indigent.

Barone said the $75,000 total supplement, which includes a $62,100 salary increase and $12,900 hike in benefits, is at no cost to the county and county officials are under no obligation to continue paying the supplement increase once the grant expires in 2023.

Barone said the increase is all part of the state Office of Indigent Legal Services’ goal of equality between the Public Defender and District Attorney offices. He said the district attorney gets paid $188,000, which isn’t all funded by the county, while his county funded salary is $80,000. He added with the supplement, his salary will be around $142,000, which is still lower than the district attorney.