One Stabbed During Fight In Dunkirk 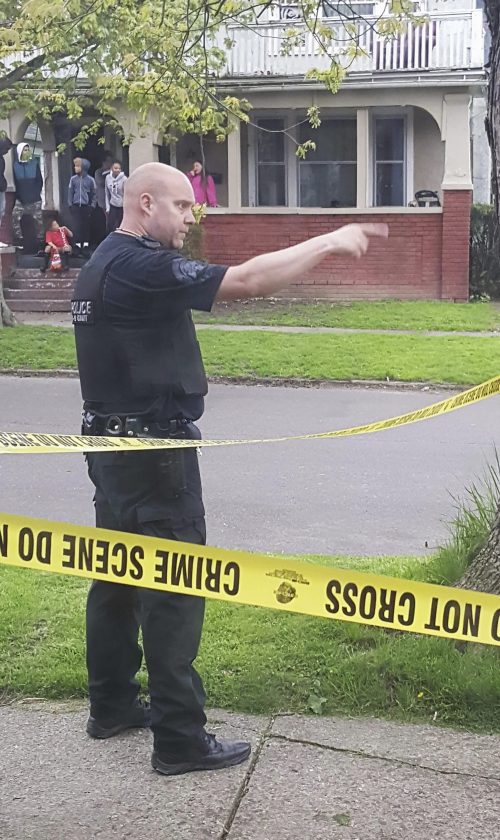 A police officer stands outside of 138 Lincoln Ave. in Dunkirk. Submitted photo

On Wednesday at around 4:06 p.m. Dunkirk Police responded to the 100 block of Lincoln Avenue in the city of Dunkirk for a reported fight. Upon further investigation, it was learned that an individual was allegedly stabbed during the altercation and then transported to Brooks Hospital by a personal vehicle. The individual was treated at Brooks Hospital and flown by StarFlight to ECMC in Buffalo for further treatment.

During the investigation, Lincoln avenue from Talcott Street to Courtney Street was blocked off for two hours before being reopened, but crime scene tape remained in place on the even side of Lincoln Avenue well into the evening.

Several individuals at the scene stated that the victim was a 14-15 year old female and the perpetrator was believed to be around 18, no gender given.

An individual at the hospital at the time when the victim was brought in said “there were a lot of high schoolers and younger kids that were filing in the parking lot near the ambulance bay. They had to bring in all these cops to prevent anyone from coming in.”

The investigation is ongoing and anyone with information on the incident can call the Dunkirk Police Department at 366-2266 or they can leave an anonymous tip on the department tip line at 363-0313. All calls will be kept confidential. Dunkirk Police were assisted at the scene by the New York State Police, Chautauqua County Sheriff’s Department, Fredonia Police, State University Police and the Chautauqua County District Attorney’s Office.