Above, James Baker, 9, cuddles his critically-ill brother, Sean, while visiting over Easter weekend. Below, from left, the Baker family James, Sarah and John. Sean is in the foreground. Submitted photos 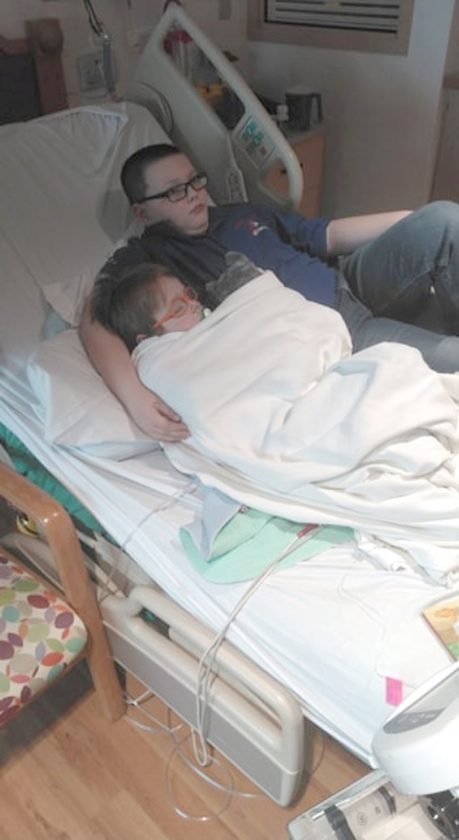 Above, James Baker, 9, cuddles his critically-ill brother, Sean, while visiting over Easter weekend. Below, from left, the Baker family James, Sarah and John. Sean is in the foreground. Submitted photos

Seven-year old Sean Baker of Leon received a miracle this week in the form of a new heart.

Imagine living with constant pain, having had 32 surgeries within seven years, a lifetime of minimal activity and never being able to eat a meal. I’ll bet that last one got your attention. Now imagine being just 7 and living in a hospital three and a half hours away from everyone you know and love, with the exception of your mother, and having access to a limited amount of your toys. Add the connection of three lines and tubes leading to monitors and a bag of formula and you pretty much have imagined Sean Baker’s daily life.

Now, imagine you are Sarah Baker, the mother of that 7-year-old boy who before the transplant, cried daily to go home, knowing neither of you would leave the hospital room until your son had a successful heart transplant. The doctors have instructed you to limit that child to minimal quiet activity since arriving April 11 and with the exception of a few short visits, you have been away from your husband and 9-year-old son, who just happens to have Type 1 diabetes. Add to that minimal conversations with the outside world, due to limited cell minutes and to the hospital’s substandard WIFI.

Sean was born with Hypoplastic Left Heart Syndrome or HLHS and was given less than a 5 percent chance to survive. The left side of his heart did not function and was very small, leaving him with two chambers. He underwent the first of three major heart surgeries when he was just 3-days-old. His parents could not hold him until he was 6-weeks-old and 2-year-old James, whose mother had to leave him in order to be with the newborn, did not see his younger brother until the baby was nearly 2-months-old. 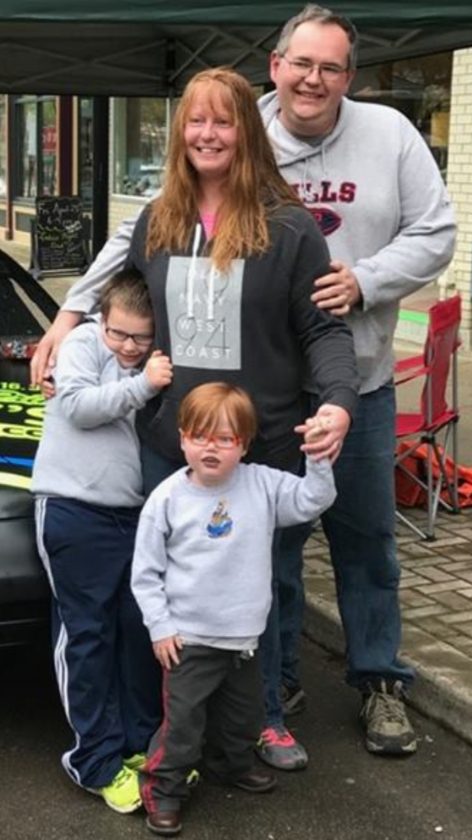 He cannot take in food through his mouth, therefore he receives liquid nutrition and medication through a G-tube, as well as a J-tube, due to a non-functioning upper gastrointestinal system. This will not change, even with his new heart.

“Sean is a mystery. There hasn’t been hard reasoning for why his body functions the way it does,” his father said. “The word ‘terminal’ has been used until recently. This was the first time we had hope.”

“Aside from the three major heart surgeries (prior to transplant), including a synthetic valve, he has had several complicated GI surgeries. Some surgeries have been relatively minor, but each involves anesthesia,” Baker said. “He has had life-threatening sepsis and even the medical professionals were baffled as to how he pulled through.”

“He takes enough pain medication to kill a horse,” he added. “Generally speaking, he will not complain when he hurts, including walking around on a broken foot for two days. Once he learned how to walk, he’s wanted to walk.”

The little boy began walking with support when he was 5.

“Since the age of 6, he’s really been able to take off without support,” said Cora Morrison, the child’s great-aunt. “Uncle Butch built a cart for oxygen.”

There have been times when the parents have been at Rochester’s Golisano Children’s Hospital for months, and John’s parents, James and Diane Baker, have stepped in to help with the older brother, as they are doing in the current situation.

Testing began at the Pittsburgh facility after Thanksgiving, and the child was added to the transplant list in January. He was unable to be away from the hospital with the IV medication he was on, therefore he was moved up on the list. It is estimated that hospitalization after the transplant will be three to four months.

“But Sean seems to do the unexpected. He is unpredictable,” Morrison said.

“One out of every 110 babies are born with a heart defect,” the boy’s father said.

Over the past five years, the family has raised $17,000 to benefit single ventricle repairs having donated it to the Golisano Children’s Hospital in Rochester, where Sean has been a patient many times.

Morrison, Sarah’s aunt, has been printing and selling t-shirts to raise awareness and support for the family. The mother’s daily expenses, including meals and parking, which was $20 per day until recently when she began receiving a discount, along with John’s expenses of the 200-mile commute, added to nearly eight years of Sean’s hospitalizations.

“I told John and Sarah ‘You have raised thousands of dollars for others, now it is time you two accept some help,'” Morrison said.

Baker, who works at Hanson Road Auto in Cassadaga, sees life altogether different than he once did.

“When I see what these boys have put up with, I think the drama is not worth it. Sean is happy to just be able to go to school.”

“The thing I have admired the most about Sarah and John is they try to push the bad things to the back of their minds to give the boys as much of a normal life as possible,” Morrison said. “Neither one of them dwells on the negative and self-pity. They stay upbeat.”

She goes on to tell how other parents of critically ill children have said Sarah Baker was the reason they got through the day when they were together at Golisano.

“She has always offered that shoulder to lean on.”

Sarah Baker worked as a medical technician at The Resource Center, a job she loved, until the day before Sean was born.

“She has learned to crochet to help occupy her time while waiting at Sean’s bedside. This is her stress-release,” Morrison said. “She needs mindless patterns so she doesn’t have to think.”

“(Prior to surgery), Sean was having rough days. He wanted to be home to play with his brother and he was struggling with fluid-retention and irregular heart rhythms,” John Baker said “He has been attached to beeping monitors since arriving at the hospital. He enjoys the mail he receives and it helps keep him calm.”

Prayers for Sean’s recovery are appreciated as are those for the family who made the decision to offer their precious child’s heart in the midst of pain and sorrow.

Community In Action and Pine Valley Central School will sponsor a chicken barbecue to benefit the Baker family on Friday, June 14, from 3-6 p.m. in the Pine Valley Elementary School cafeteria. Cost of tickets is $10 presale and $12 at the door. Call the school office at 988-3291 for more information.

For those not attending the event and wishing to help Sean’s family, please make checks to Sean’s father, John Baker, and send to: Cora Morrison, 5483 Route 241, Conewango Valley, NY 14726.

heart transplant folder in may 4newsroom

Sean Baker received a new heart on May 14 in University of Pittsburgh Medical Center Children’s Hospital, where he has been since April 11 with his mother at his side. His first heart surgery took place when he was just three days old in Rochester’s Golisano Children’s Hospital. Submitted photo

The Baker Family Left to right-James, Sarah and John. Sean is in the foreground. Submitted photo