For more than a week, crews worked on renovations to the home of the Willett family. The home improvement was filmed for “Military Makeover With Montel” on Lifetime Network. Pictured are Jessica Willett, Cody Willett and Montel Williams during the makeover reveal Thursday at the family’s Ashville home. P-J photo by Jordan W. Patterson 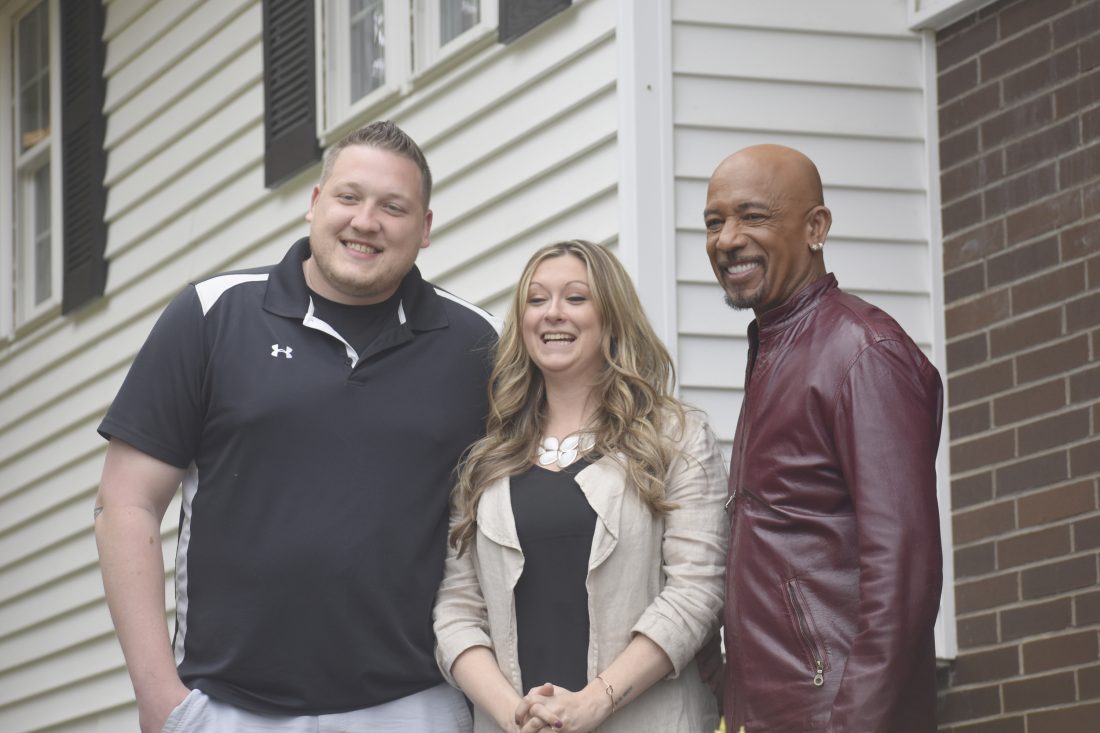 For more than a week, crews worked on renovations to the home of the Willett family. The home improvement was filmed for “Military Makeover With Montel” on Lifetime Network. Pictured are Jessica Willett, Cody Willett and Montel Williams during the makeover reveal Thursday at the family’s Ashville home. P-J photo by Jordan W. Patterson

ASHVILLE — Cody Willett, alongside his wife Jessica and TV host Montel Williams, stood on his front steps as he thanked the rows of volunteers standing in his driveway.

“Thank you,” he shouted to the many people who came out to support his family just before seeing his newly remodeled Ashville home.

Willett, a U.S. Air Force veteran, was selected as the subject of “Military Makeover With Montel,” a home improvement show on Lifetime Network. He returned home Thursday with his wife to see the renovations made over the last two weeks. Renovations were made primarily on the kitchen and other family rooms throughout the home.

The Willett family, including their two children, was led by motorcycles and a police escort to their Ashville home. 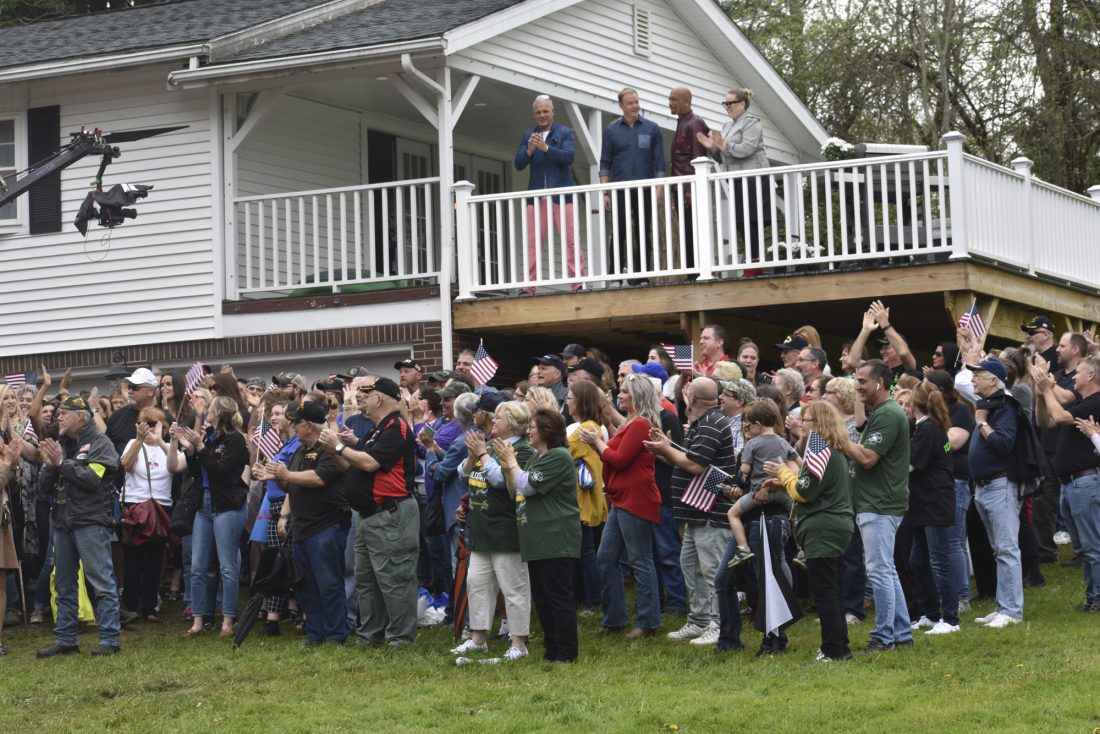 Willett suffers from PTSD stemming from his deployments to Afghanistan. He is a currently a member of the Chautauqua County Sheriff’s Office where he works as a computer specialist.

Describing his spouse as his “rock,” he told The Post-Journal in March he just wanted to repay his wife for the support she gives. He hoped, in the weeks leading up to the project, that the remodeling was a step in the right direction.

Four months into his second deployment as a weapons supply technician for special operations teams, his base was attacked. Willett was severely injured in a rocket propelled grenade attack, leaving him with a fractured lower spine, dislocated shoulder and a damaged ankle.

He was medically evacuated to Germany and eventually returned home. He met Jessica, a friend of his sister, while recovering and later married.

Willett’s father, Harold, said of the makeover: “It’s been overwhelming.” He noted that while all servicemen and women deserve similar treatment, he was happy to see his son chosen to appear on the show and experience a home makeover. 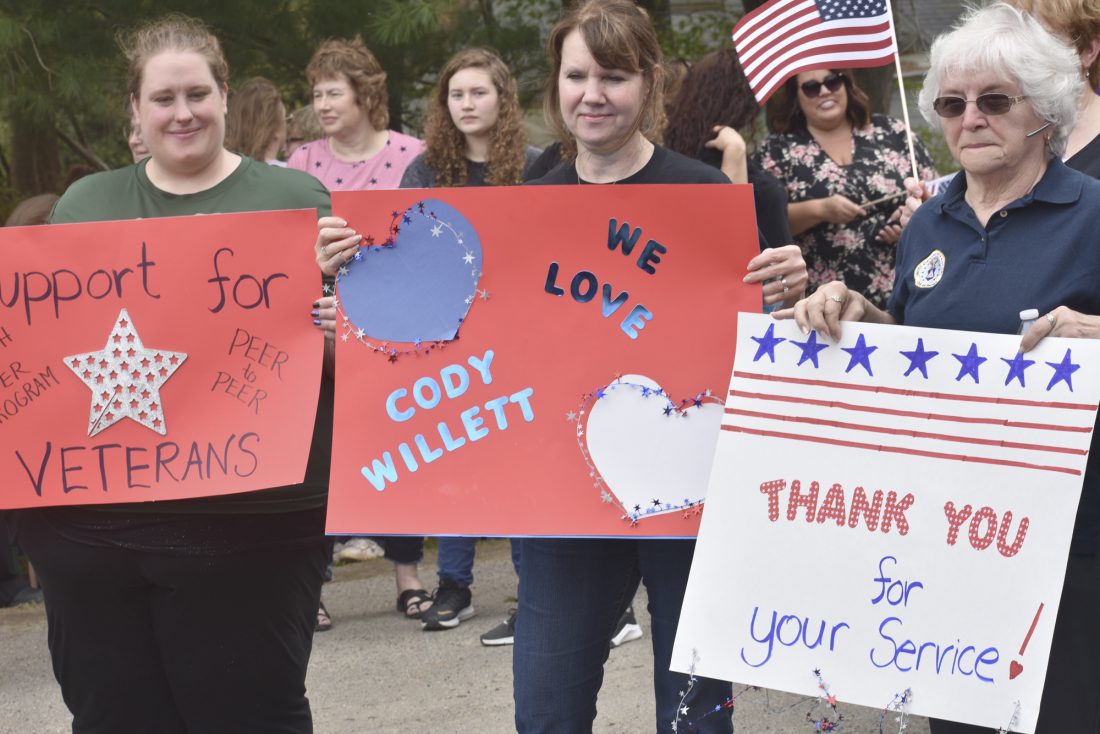 Harold Willett said he’s proud of the work his son has done with the Sheriff’s Office and the Computer Career Now agency where his son is taking computer courses. The company also helped renovate Willett’s home.

Montel Williams, the host of the show and U.S. veteran, said support from friends and the community has been overwhelmingly positive.

“This community has kind of come out in droves,” Williams told The Post-Journal in an interview. “(It has) really, really come out showing their compassion.”

According to the militarymakeover.tv, the show offers hope and a helping hand here on the home front to members of our military and their loved ones enlisting conscientious designers, contractors, landscapers and other home improvement professionals to transform the homes and lives of military families across the country.

On Thursday, Williams’ sentiment was evident outside the Willett home.

The Willett family was relocated for the duration of the project. Finishing touches were made just hours before the reveal.

The renovation project is in collaboration with the Dwyer Program that helps veterans return to civilian life.

The agency’s goal of assisting veterans was on full display Thursday, with the help of the home renovation TV show and the support from the county.