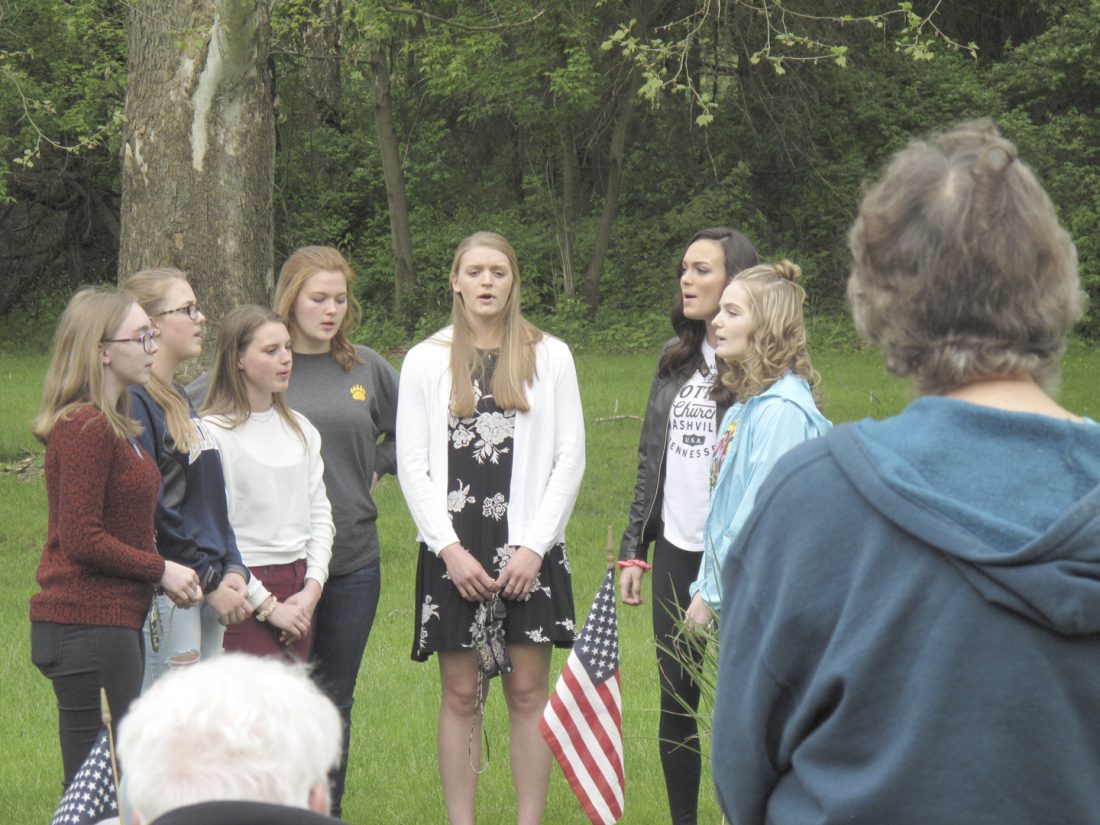 Girls from Frewsburg Central School’s Singing Bearettes perform during the opening of the Honor and Remembrance Ceremony at Veterans Memorial Park. P-J photo by Eric Zavinski

With those words, Payne spoke to Carroll town residents during the eighth annual Honor and Remembrance Ceremony for those actively serving in the military, veterans and those who made the ultimate sacrifice.

Susan Rowley, president of the Blue Star Mothers of America Lake Erie-New York Chapter 4, introduced Payne as the keynote speaker and shared some thoughts on the Memorial Day season. She urged those who attended the ceremony at the Veterans Memorial Park in Frewsburg to continue commemorating the core of the holiday: respecting and remembering loved ones who served.

“We are here tonight to honor and remember all those who have fought for our freedoms and never returned,” Rowley said.

Residents, including the evening’s speakers, government representatives and others, reflected on their loved ones’ service and honored their sacrifices by placing flowers around the park’s American Flag.

Rowley said she knew of 12 town residents actively serving in the military and said there’s likely more. She recalled names of former servicemen who gave their lives and never returned home to Frewsburg.

To commemorate their lives and the service of veterans still living, Rowley said the Wednesday date, between Armed Forces Day and Memorial Day, was specifically chosen to best honor all who sacrifice their freedoms to fight for the freedoms of others.

Veterans Memorial Park has been hallowed ground next to the Carroll Town Park for nearly a decade and about as long as the remembrance ceremony has been hosted by Rowley and Blue Star Mothers. Rowley’s son still currently serves in the military.

“It completely takes over your life,” she said in regard to being a mother of a serviceman.

Rowley noted that the next hardest thing to serving one’s country is being a close relative of someone who serves. She said that’s why groups like Blue Star Mothers exist. The organization has delivered about 1,400 care packages in 2019 so far.

“That connection” with the veteran community, Rowley described, is what the Memorial Day season is about. She thanked the several local veterans in attendance and is looking forward to multiple services to be held this Memorial Day weekend.