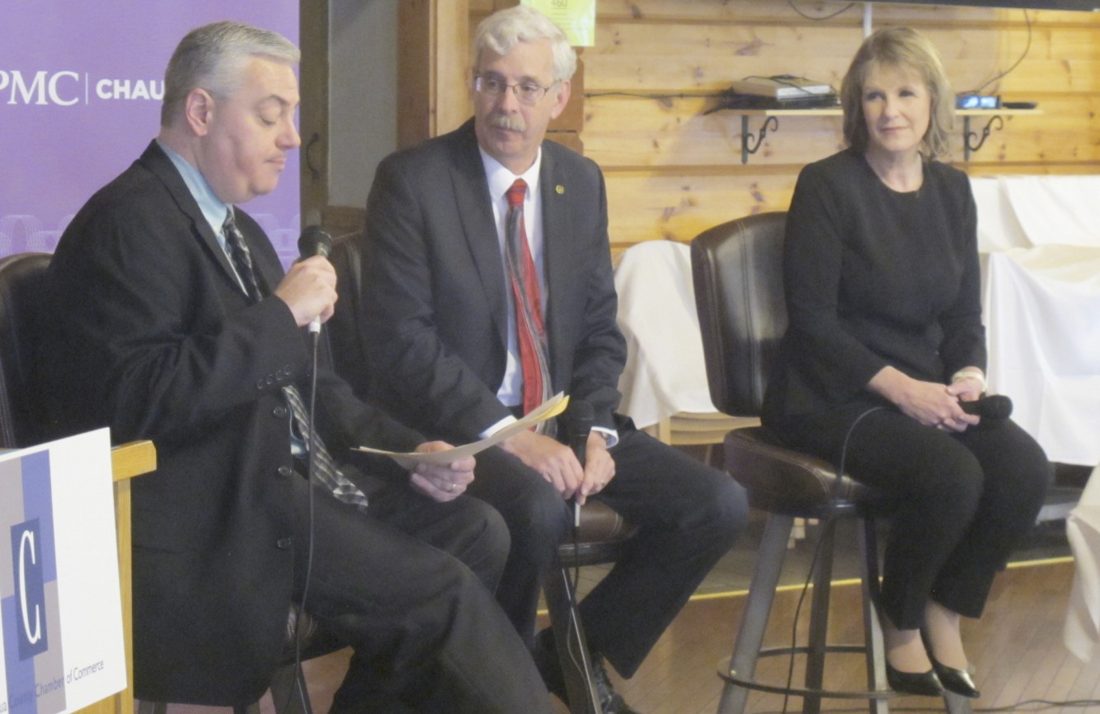 The Chautauqua County Chamber of Commerce and community residents had a chance to say “Thank you” to a former state representative who served the area for the past 20 years.

On Friday, the chamber held its annual legislative breakfast with guests state Assemblyman Andy Goodell and former state Sen. Cathy Young, who received special recognition from the community members who attended for her service as their representative for the past two decades in the state Assembly and Senate.

Young said she will still be helping people in the 57th Senate District, which covers Allegany, Cattaraugus, Chautauqua counties, and portions of Livingston County, through her new job as director of the Center of Excellence for Food and Agriculture at Cornell AgriTech. She will still be working to help the agricultural industry with economic development and creating jobs.

“This is a way I can do it,” she said. “I can still have a positive impact in my district.”

Young said people in the district should know her senate office is still open and can help people with their concerns. The Jamestown office is located at 2 E. Second St., Suite 302, and can be reached by calling 664-4603. She said during her tenure as state senator from 2005 to 2019, that the office received thousands of calls a year from people needing assistance.

“Leaving the senate was not an easy decision for me,” she said.

Young discussed some of the agricultural initiatives she has been working on since joining Cornell last month. One of those initiatives is the potential of hops and barley being grown in Chautauqua County for the first time in nearly a century. Last month, the Chautauqua County Legislature approved funding $20,000 toward a feasibility study to determine the possibility of growing hops/barley locally.

Last month, Mark Geise, deputy Chautauqua County executive for economic development, discussed funding for the feasibility study for a hops/barley economic development project with the Chautauqua County Legislature Planning and Economic Development Committee. Geise said the total cost of the study is $120,000, with half being funded by Chris Lacorata, who has 35 years experience in strategic development, with most of this time working in the beverage industry with corporations like Coca-Cola and Pepsi.

In February, Lacorata gave a presentation to the committee about a new concept called “Project Grow Chautauqua” that could be the start of growing hops and barley in the county. He has been working with a committee of local stakeholders, which includes the Chautauqua County Industrial Development Agency, Cornell Cooperative Extension, Southern Tier West and the State University of New York at Fredonia, on the concept that would be a dual industry with the hops and barley being grown for both the craft brewing and spirits industry as well as for the healthy foods industry.

Young also talked about the possibility of hemp being grown in Western New York. She said the federal government has lessened restrictions on the growing of hemp, which can be used for several purposes like producing fiber that can be used in clothing and car seats.

During the legislative breakfast, those who attended had the chance to ask their representatives questons. One question was about the recently passed state budget. Goodell said unfortunatly with both parts of the state Legislature being controlled by New York City legislators, Upstate and Western New York didn’t fair as well as the Down State region. He is trying to overturn some of the polices passed in the state spending plan. One is the initiative passed that mandates employers provide three hours of paid time off to cast a ballot on Election Day. He said even though the state is moving forward with early voting, the new provision to allow employees three hours of paid time off will be a huge potential cost to employers. He added there is no exemptions to the new law to protect small businesses or facilities like hospitals, nursing homes, police and fire departments that have minimum staffing requirements. Goodell said he is working on bipartisan legislation to reverse this mandate.

Another questions was about how Gov. Andrew Cuomo’s new green deal will impact the Jamestown Board of Public Utilities. Goodell said the BPU uses a natural gas turbine to generate electricity, which is highly efficient and has a low envornmental impact. He said that the new green energy plan is “intellectual fraud” because the environment is impacted greatly. For example, he said there is enviromental impact when creating the metal that is used to construct wind turbines. Another example he said was there is a signficant enviromental impact when mining for lithium, which is used in batteries to power electric cars.