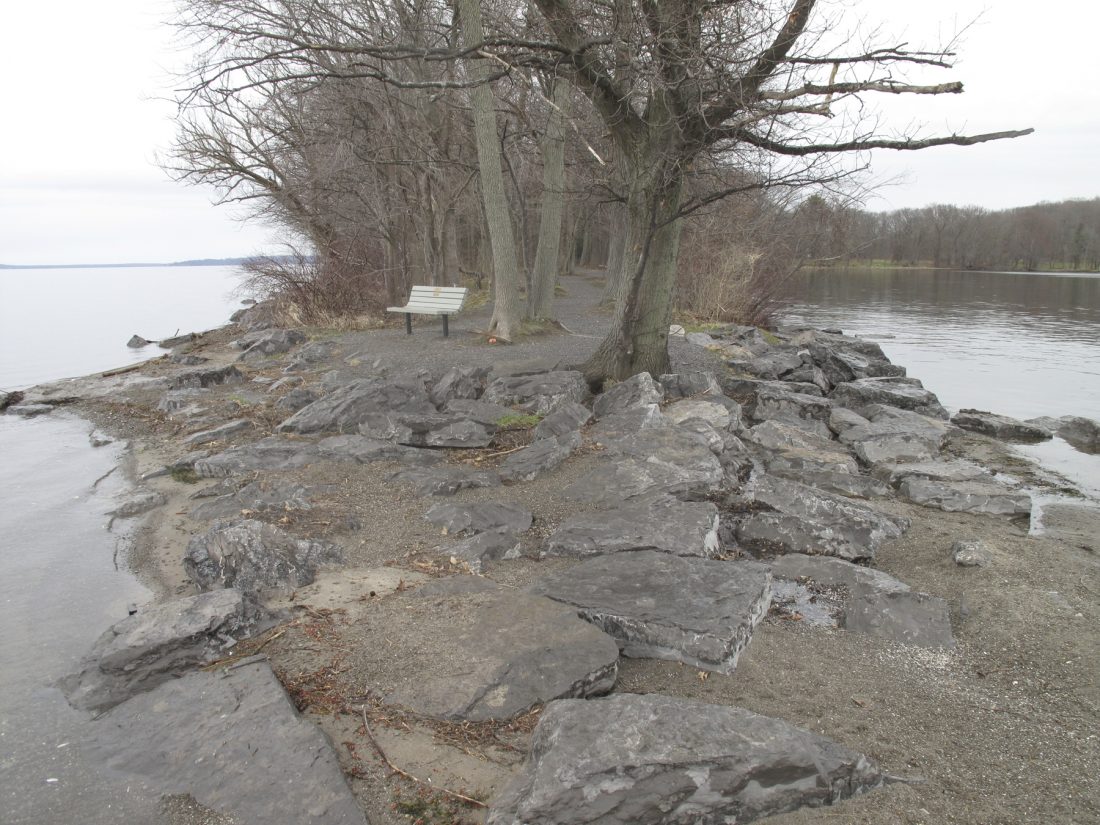 The peninsula of Long Point State Park divides the north and south basins of Chautauqua Lake. Due to a tenet in the county-led lake agreement that stated no herbicides could be used to treat waters in the north basin, the town of Ellery chose to become the sole potential cosigner not to sign the Memorandum of Agreement for the Chautauqua Lake Weed Management Consensus Strategy. P-J photo by Eric Zavinski

“We’re not going to change our mind.”

With those words, Ellery Town Supervisor Arden Johnson cemented the fact that his municipality will be the only group not to sign onto the countywide Memorandum of Agreement for the Chautauqua Lake Weed Management Consensus Strategy, something he said would make Ellery “go down in history.”

Tuesday saw an end to the anticipation of which lake nonprofits and municipalities would sign onto the agreement that Chautauqua County Executive George Borrello and other county officials have been pulling for since March 27 when the document was officially unveiled.

Back then, Johnson, like most others, seemed optimistic about the ideas of collaboration and third-party verification of science. After a town board meeting Thursday, however, Johnson became certain that the town would table the vote to sign – a measure that would effectively become a “no” vote.

Considering the advice of Ellery Town Attorney Neil Robinson, who had advised the board not to sign the memo, Johnson said he deferred to Robinson’s opinion and expressed confidence that the rest of the board agreed with him. Robinson declined to return comment to The Post-Journal Tuesday.

Johnson cited the tenet that herbicides would not be allowed to be used in waters north of the Long Point State Park peninsula, and board members and residents disliked the idea that the consensus strategy wouldn’t have allowed them to take part in the process of legally applying herbicides along northern Ellery shores.

It remains to be seen whether the New York State Department of Environmental Conservation will permit any herbicides to be used in waters north of Long Point, but Johnson said it was the principle of this specific compromise that dissuaded the board from taking action on the lake agreement.

Johnson said both Sunset Bay and Warners Bay have been problem areas in past years in terms of nuisance weeds. Other areas, including Long Point State Park itself, remain relatively clear of aquatic macrophytes.

As the Memorandum of Agreement kicks in May 1 for the 15 entities that have signed onto it, Johnson said he would be open to reevaluating the town’s decision during an annual review process next spring, which Borrello said might be possible.

When asked whether town residents’ taxpayer dollars came into consideration –as many were spent last year through litigation with Chautauqua Institution — Johnson said he’s received no complaints from residents and suggested that if a lawsuit would again occur, it would happen regardless of Ellery potentially signing on.

One of the tenets of the lake agreement is that cosigning organizations are legally not allowed to sue other member organizations as long as all parties are following the principles and ideas outlined in the consensus strategy.

The Chautauqua Lake Partnership, the nonprofit helping to facilitate herbicide permits that are scheduled to be announced later this spring, signed on Tuesday after some of their members’ concerns were addressed by Borrello.

The village of Bemus Point, nestled in the southern end of the town of Ellery, unanimously approved signing onto the lake agreement, with all four trustees heeding the advice of others, including CLP President Jim Cirbus.

“It’s the right thing to do to pull together,” Bemus Point Mayor Bryan Dahlberg said.

“I’m just very grateful that we have so many people willing to work together for the betterment of the lake,” Borrello said.