Carroll Town Board Hears Of Plans For Landfill 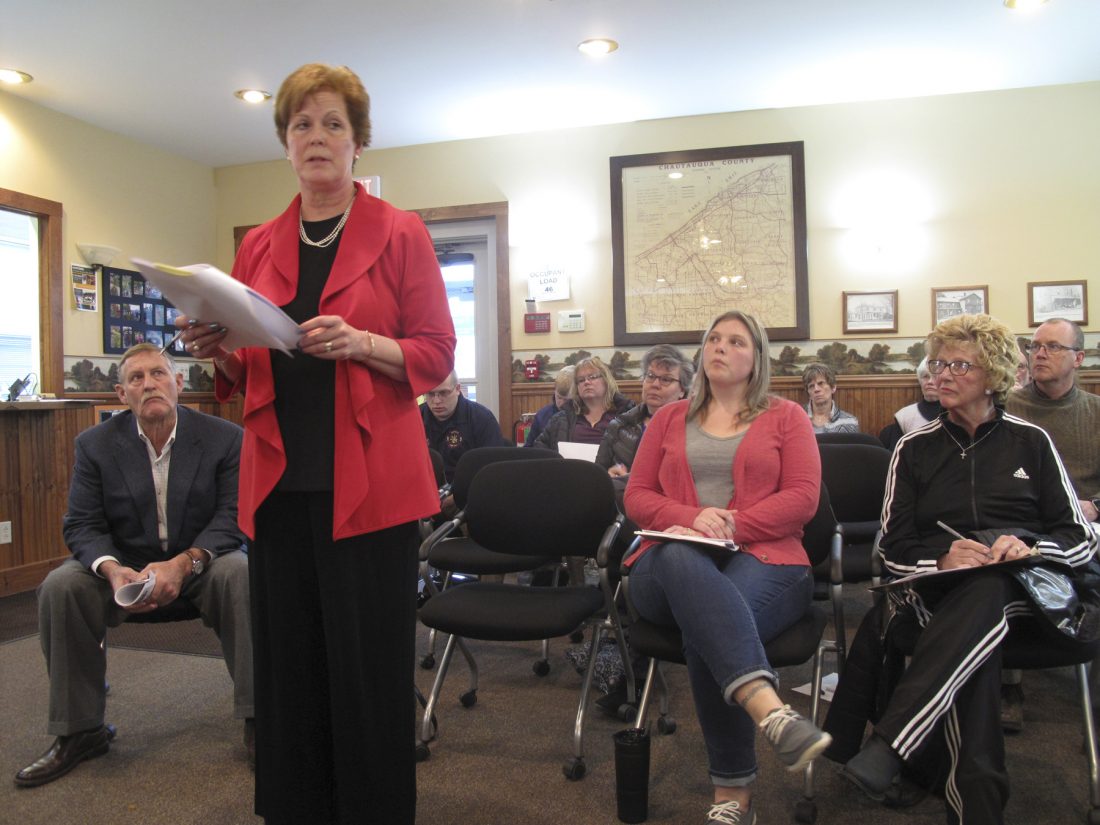 Anne Riley, spokeswoman on behalf of Sealand Waste LLC, delivers a presentation on her client intending to settle the lawsuit with the town of Carroll and expand further the Jones-Carroll Landfill, an initiative of the company for the past 15 years. Sealand received no public support Wednesday, but residents did outline concerns with potential expansion. P-J photo by Eric Zavinski

CARROLL — The dispute over the Jones-Carroll Landfill was reintroduced by a spokeswoman for Sealand Waste LLC, the company contracted to purchase the 309 Dodge Road property and expand it into a larger facility.

Bringing back to mind the lawsuit between Sealand and the town and public outcry against the expansion of the landfill, Anne Riley addressed the town board to offer an idea of a settlement to end legal action that has lasted more than 10 years.

Part of a settlement would include little compromise, as Riley expressed that a “state of the art solid waste management facility” for composting, recycling and material recovery at the site.

“This project, once approved, will create jobs, reduce taxes and incentivize economic development for the town,” Riley said.

Regardless of public disagreement with the project, approval is a long way off from reality even if the majority of Carroll residents supported the project. While Riley said there are residents who want the project and that the New York State Department of Environmental Conservation expects to issue permits for the project, statements from county and municipal leaders say otherwise.

“Everyone who has talked to me has opposed,” said Chautauqua County Legislator John Davis.

Town Supervisor Laura Smith said that DEC permits are not ready and confirmed that an environmental impact statement is still being revised. In terms of Sealand’s appeal in Chautauqua County Supreme Court, the petition was denied and dismissed.

Sealand’s litigation had been arguing that Carroll’s 2007 Waste Disposal Law was null and void to help the legal process to favor the project expansion, and further appeals will stretch the lawsuit onward.

Members of Carroll Concerned Citizens listened to Riley’s statements in which she shared that Sealand felt “scare tactics” intimidated anyone who would agree with the idea of the landfill expansion from sharing their thoughts. Those who attended the meeting did not express agreement with Sealand’s spokeswoman, who left immediately following her presentation.

Residents listed being concerned with potential garbage truck traffic, water pollution and the landfill becoming an eyesore as reasons to oppose it.

In other news, the town’s new comprehensive plan was unanimously accepted by the Carroll Town Board.

As the first comprehensive plan for the town since 1967, this document will guide 2019 goals such as expanding the business corridor and revising antiquated zoning codes.

Town Board Member Ken Dahlgren said the plan has been in the works for the past five years and is now set up to be greatly revised after every U.S. census and to receive small revisions every year to guide town representatives and community members to work toward various initiatives. Dahlgren also said having a comprehensive plan will help the town become more competitive for government and foundation grants for town beautification. The plan will soon be made available on the town website.

A decision on what to do regarding a potential external audit on the town’s previous financial records for approximately five years that were botched due to faulty accounting between 2013 and 2017 was also discussed. Concerned residents brought the issue to the attention of the board multiple times in previous months.

Honey and Associates, the town’s former accounting firm, was discovered years ago to have not kept accurate records of incoming revenue for half of the decade. Citizens said they were concerned not knowing financial information for years gone by, and the board members shared the concern. However, Smith said that it was unlikely that fraud was committed against the town and that an audit would be too expensive and wouldn’t help the town financially.

“In regards to the bookkeeping, there is really nothing you can do,” said Paul Webb, Carroll’s town attorney. “I would just concentrate on going forward, making sure the records are corrected and that the current bookkeeper corrects any previous errors and gets filed any reports or documents that the town should have filed but did not.”

In order to figure out from which line items revenue came from and in what specific amounts for 2013 through 2017, an extensive audit would need to be completed. Quotes from accounting agencies revealed that could cost up to $20,000 and that even a general audit would cost anything from $5,000 to $10,000.

Smith said she thinks that Kevin Honey, the former bookkeeper, had not been knowledgeable in municipal bookkeeping and had had poor communication with the previous administration before her time as town supervisor. Smith had been town clerk when Honey was in charge of keeping financial records for the town.

“We know that,” Smith said of already knowing records had not been kept properly. “This is taking up too much of our time.” 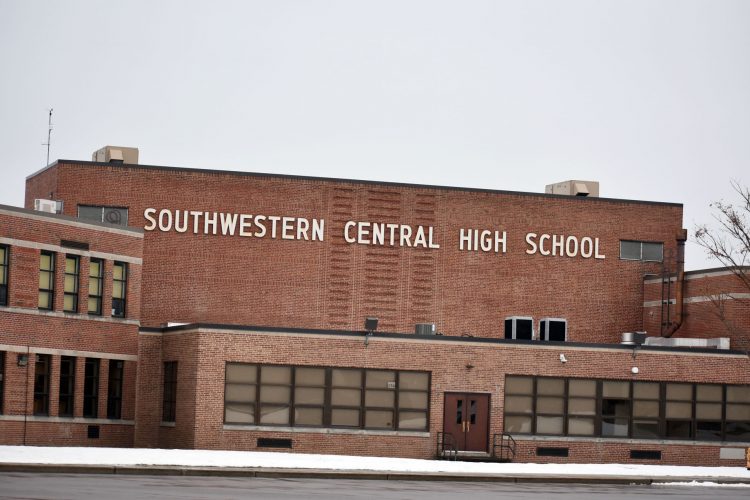 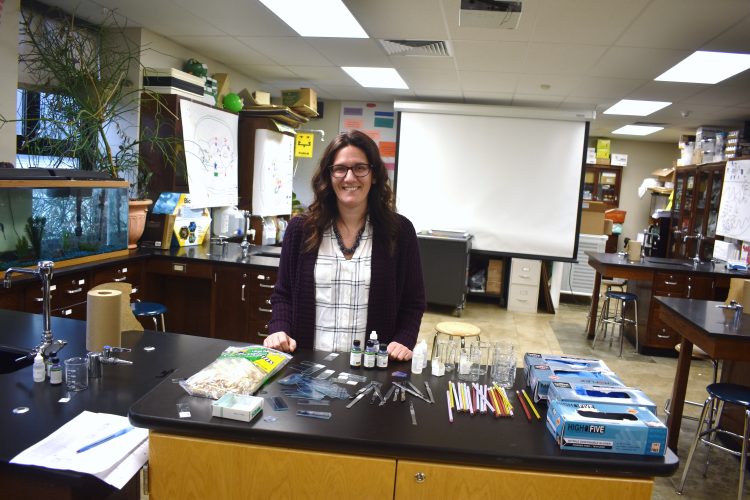 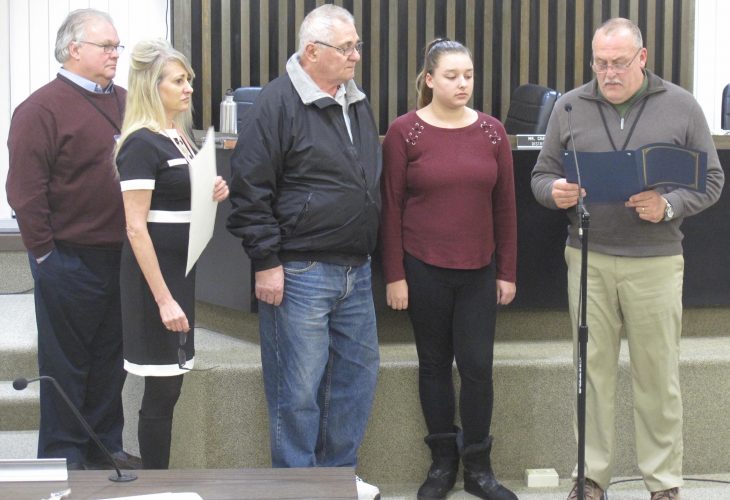