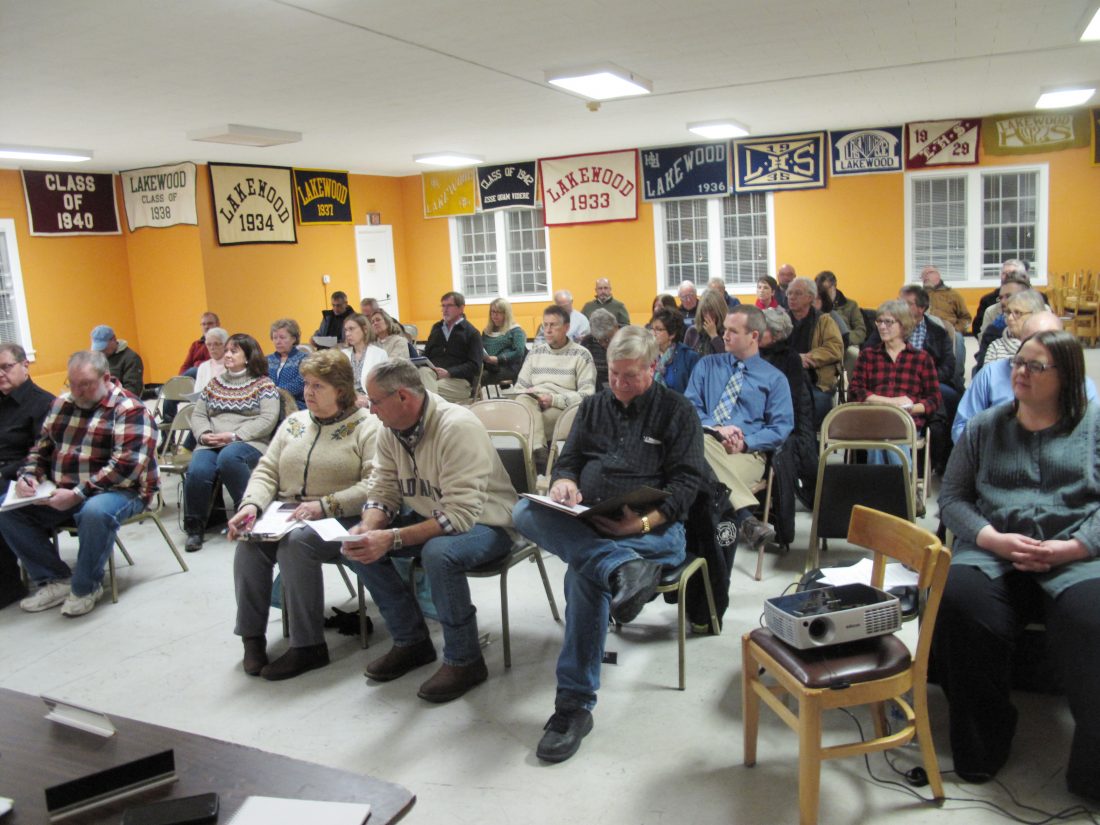 The crowd at a Lakewood Village Board meeting Jan. 28. Seated fourth from left in the front row, Building Inspector Jeffrey Swanson prepares to make his report. He stated that since the special upstairs meeting space in the Anthony C. Caprino building has not been meeting standards of compliance with recent occupancies, he had to remove himself from the meeting. P-J photo by Eric Zavinski

LAKEWOOD — “Moving this meeting to this floor is a direct violation.”

With these words, Lakewood building inspector Jeffrey Swanson tried to enforce the same standards businesses and residences must comply with onto the village government that employs him. Swanson said he had brought the occupancy issue to the attention of the board of trustees multiple times only to see no action taken.

Lakewood meetings are moved to the second floor of the Anthony C. Caprino Building when large crowds appear, usually for hot-button issues, such as the vote for an interim mayor or last month’s votes on accepting grant money for stormwater management and village beautification projects.

Before that decisive topic was brought to the floor, Swanson had already vacated the meeting since he said he should not be held accountable for the board not following his advice to appropriate funds to make the special meeting space compliant or to move the large crowds to other open areas in the village instead.

“It is something that has been ignored,” Trustee Ellen Barnes admitted. “He put us all on notice.”

Barnes and fellow Trustee Randy Holcomb talked with The Post-Journal about Swanson’s points and agreed that the second floor meeting space is not Americans with Disabilities Act-compliant nor safe for residents in case of an emergency.

The upstairs auditorium has a posted maximum occupancy of 49 people. Multiple meetings over the months have exceeded that number as Swanson has counted every time. He said he has brought the issue to the attention of the trustees numerous times.

Exceeding capacity is a compounded problem for the Village Board since a labeled exit at the northwest corner of the room leads to the roof and not safely away from the building. This leaves one doorway as the only safe means of entrance and exit for the special meeting place.

“These are issues that have been brought up since prior to me,” Swanson said. “I brought this up the last time the meeting was moved upstairs.”

Busti Town Supervisor Jesse Robbins offered the town office building on Chautauqua Avenue as a meeting place for when Lakewood’s crowd exceeds the size of its usual first floor meeting space in the Caprino building. Holcomb suggested the board take up Robbins’ offer at the Jan. 28 meeting.

“Everybody in Lakewood is a Busti resident also,” Holcomb later reiterated.

He likened the potential use of the Busti address to accommodate large crowds as another kind of shared service between the town and village. Deputy Mayor Ted McCague did not respond to calls before press time, nor did he officially comment on the situation at the Jan. 28 meeting. McCague thanked Swanson for his comments at the Jan. 28 meeting.

“I feel that it is another time that I am trying to show compromise and not have our village get into trouble,” Holcomb said, “and yet it was completely disregarded.”

Violation of state building codes will eventually force Swanson to have to give the village government an appearance ticket.

“How can (Swanson) enforce the zoning code everywhere and not hold the village to the same standard?” Barnes asked. “All you need is one incident, and people get hurt.”

Trustee Doug Schutte later said there was an informal discussion among the trustees following the Jan. 28 meeting. Should larger than normal crowds be expected in the future, another meeting site could be considered.

“My understanding is that we will find another location,” Schutte said.