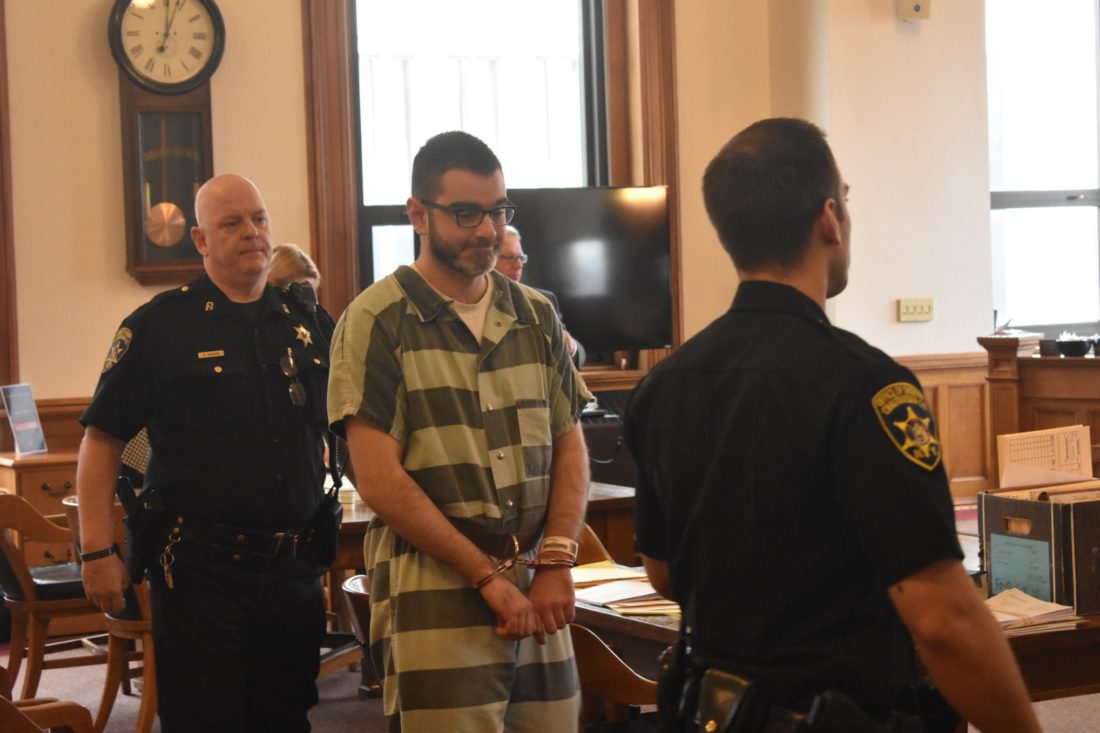 MAYVILLE — A plea offer was rejected by the defense of Jonathan Young, the Jamestown-area man accused of setting a dozen fires last year. The deal was proposed shortly before a hearing in Chautauqua County Court on Thursday to discuss evidence in the case against Young, who is facing a 25-count indictment that includes 13 felony arson charges.

The plea from Derek Gregory and John Zuroski, assistant district attorneys, was withdrawn before the Huntley Hearing in front of County Court Judge David Foley.

Young, who is being represented by the Chautauqua County Public Defender’s Office, pleaded not guilty when he was arraigned in August after he was brought back from Pennsylvania, where he faced other charges in the state.

The most serious charge, second-degree arson, carries a sentence of up to 25 years in prison.

Young is being represented by Ned Barone, public defender. Philip Cala, an attorney from the Public Defender’s Office, handled the defense’s line of questioning.

The questioning Thursday established a timeline of the events that occurred from March 2, 2017, through April 5, 2017.

Much of the defense’s questioning focused around police procedure and mental health. Cala often asked the witnesses about mental health and if Young showed signs of manic-depression. Cala even referenced Young having previously been treated for mental illness.

On Thursday, many of the fires reportedly set by Young were discussed. On March 2, 2017, two fires were ignited at 621 E. Sixth St. Based on testimony from Goot, who was assigned to investigate the fires, he met with Young following the first fire in the early hours of the morning. Tenants told the detective that Young was at the scene retrieving personal belongings. Following the second fire around 11 p.m. and throughout March, Goot said Young remained a person of interest.

During the second fire Kraft responded to the scene where he was made aware of footprints in the snow that led behind the residence and onto the roof. Additionally, Kraft indicated, while the property was engulfed in flames, Young approached him and engaged in a conversation. Kraft indicated the footprints he observed behind the house were similar to the tread marking Young’s footwear left in the snow.

Kraft said Young made comments regarding his roommates at the time at the Sixth Street address desiring for Young to move out. Young said his roommates threatened to burn his clothes, according to the testimony.

The following day on March 3, 2017, Goot made contact with Young at a James Street residence in Jamestown. Young was invited to the Jamestown Police Station where he was interviewed. Goot’s police reports of his meetings, Young’s signed acknowledgment of rights and the video-recorded interviews were entered into evidence Thursday. The first interview occurred in two sessions. Young was handcuffed in between the two sessions for less than 10 minutes and was released later that day.

Young was originally handcuffed after Goot was going to charge him with the March 2 arsons. Samuelson stopped Goot from charging Young, citing a lack of probable cause.

Young agreed to return to the police station for further questioning on March 6, 2017. He met with police, but no charges were filed.

Young was charged on March 28, 2017, with a slew of charges in Butler County by the Pennsylvania State Police following an investigation conducted by Balcik after a home was set on fire. Young was described by troopers and witnesses to be seen leaving the area shortly before. He was found at a diner nearby.

At the time, Young told police his name was Grant Davis. He was charged under the name of Davis and also referred to as John Doe after state police were not able to confirm Young’s alias.

According to testimony, Young informed a Butler County Jail employee of his real name. The jail contacted New York State Police, who at the time were searching for Young as a missing person after he wasn’t seen for an extended period of time, and later spoke with JPD on April 3. Samuelson left a voice message for Balcik who later returned the call when the two arranged for a meeting the following day.

Goot and Samuelson traveled to the Butler barracks on April 4, 2017, where they observed Balcik and another trooper interview Young for a second time. During that interview, Balcik referred to Young as “Mr. Davis,” to which Young responded, “they didn’t tell you, I found out my name,” according to Cala’s questioning and Balcik’s testimony. During the interview, Young denied involvement with any of the arsons, but admitted to stealing a car from a home near Russell, Pa., in Warren County.

In August, Bail was set at $1 million cash/property, $2 million bond at the proceeding in front of Judge Foley. Young pleaded not guilty during his arraignment and was remanded back to the Chautauqua County Jail.

In Butler County, Young was sentenced after setting fire to a home in Slippery Rock Township. He traveled to the area in the stolen vehicle. He was sentenced for the latter in September before he was extradited to Chautauqua County.

Additional exhibits accepted as evidence on Thursday included video recording of the Pennsylvania State Police interview and additional paperwork from Butler County regarding the investigation and court proceedings for Young’s charges in the neighboring state.

The trial is scheduled to begin on Jan. 22. Memorandums about any suppressible evidence are due from the Public Defender’s and District Attorney’s offices by Jan. 11.