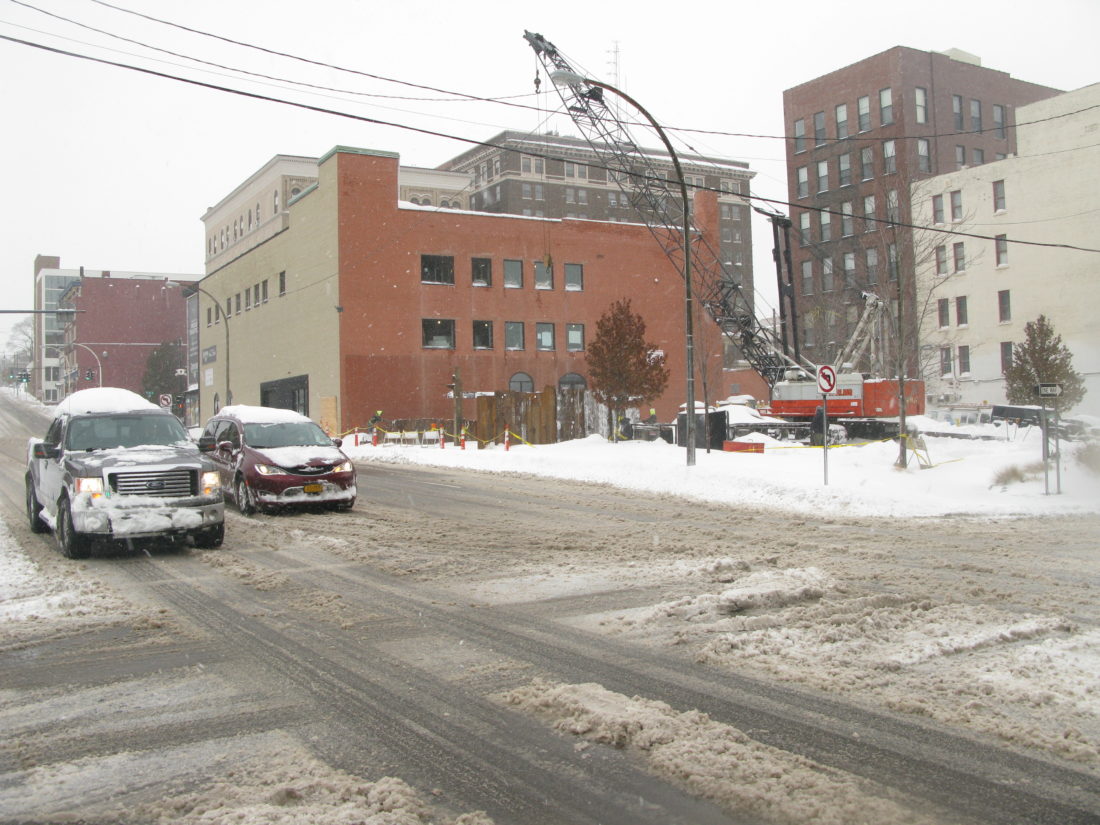 A crane sits on the future site of the Jamestown Brewing Company in the city. P-J photo by William Mohan

Sheet piling being placed into the ground next to the future site of the Jamestown Brewing Company may have caught the attention of some residents last week. Now with the piling in place, the site is prepared for a Brownfield Cleanup slated to remove contaminated soil beneath the parking lot.

The sheet piling will provide structural support for an excavation of 20 feet of soil. A crew will remove the first 8 feet of healthy soil and then remove the 12 feet of contaminated soil that was found in an environmental investigation last year to have been infiltrated with dry cleaning solvents that had seeped into the ground when a dry cleaning business was located in the area.

G. Patti Development will spearhead the cleanup as they have also led the renovations to the upcoming brewery, which is still slated to open in January 2019. The approximately $500,000 cleanup will begin in early December and should be finished around the turn of the New Year. Contaminated soil will be disposed of at the Chautauqua County Landfill, and another site in Canada will receive the higher contaminated material.

Through the cleanup program, tax credits will be issued for the overall project at a maximum amount of 24 percent, or more than $1 million for the $4.5 million brewing company project. The cap for a non-manufacturing project’s cleanup is three times the amount of the cleanup at approximately $1.5 million.

He explained that the company, led by President George Patti, wanted to clean up the area in the most aggressive, efficient manner possible. Injection wells could have been installed to remove the contaminants over three to five years, but the excavation will prove a far quicker process overall. The plan is for the tax credit incentive to go into effect for the current tax year.

“(Patti) wanted to do the correct thing,” Lindquist said.

The New York State Department of Environmental Conservation helped test for the extent of contaminants: how far deep they reached into the soil and how far out they spread. The more than year-long process involved public input and a plan prepared by LaBella Associates to dig an approximately 50 by 60 by 20 foot hole into the ground.

G. Patti Development gets awarded the tax credits once the DEC approves that the excavation of contaminants proved a success. Clean soil will be piled back into the excavated pit, and the sheet piling will then be vibrated out the same way they had been placed.