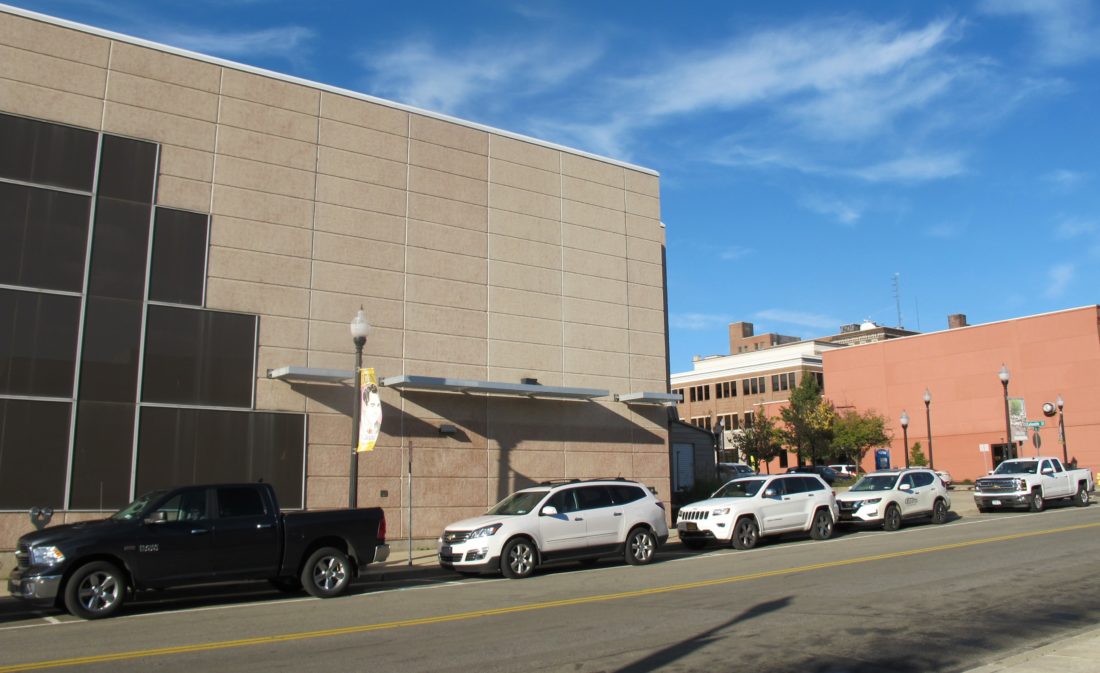 The Jamestown Planning Commission has tabled a proposal to sell city land to Northwest Arena officials for their new addition.

On Tuesday, the commission held a discussion on the potential sale of city right of way land being used for parking on the northside of West Second Street, which is located south of the arena, for the addition project. Jeff Lehman, city public works director, said the arena wants to purchase 98-by-9.5 feet of city property for the addition, which is currently being used for five parking spaces. He said the first step for arena officials for their planned addition is to acquire the property.

Lehman said if arena officials acquired the land, it would not create any traffic issues because the space arena officials want to acquire isn’t in the traffic lane. He said, if approved, arena officials would replace the existing sidewalk by installing a new walkway area where the parking spots are located. He added that the site plan is not ready, but arena officials might present their plans at the Planning Commission’s next meeting in November.

Paul Whitford, city Planning Commission chairman, said he doesn’t feel it would be right to recommend a sale of the land to the Jamestown City Council before seeing a site plan.

“We have a lot of questions,” Whitford said, noting that there was no site plan to review.

In August, Kristy Zabrodsky and David Leathers, co-presidents for the Northwest Arena Board, spoke about the preliminary plans for the addition at the arena, which is located at 319 W. Third St., with the Planning Commission. The plan is to construct a new addition to hold a Kids Zone play area; create gift shop and office spaces for the National Comedy Center; to add a concession stand to sell snacks and water; and to enhance the third floor conference room. The project is being proposed to cost around $5 million.

Zabrodsky said they want to do the expansion project to eliminate the Gebbie Foundation’s annual operations grant so the funding can go toward other worthwhile projects in downtown Jamestown. She said by drawing more people to the arena, they will create more revenue so the facility can be self-sustaining.

Another goal of the project is to make the facility more useable year-round and not just reliant on seasonal winter activities like skating and hockey. Zabrodsky said the arena has about 250,000 visitors a year.

Leathers said the new 5,000-square-foot addition to the arena would be for a Kids Zone. He said the Kids Zone would be ideal for parents who want to leave their children some place safe while they tour the National Comedy Center or while one of their other children participate in a skating activity.

Leathers said the proposed concession space would not be a restaurant or bar, but would only sell snacks, deli sandwiches, water and soda.

The project would also include a new redesigned office space for arena officials. Zabrodsky said currently arena staff members are located throughout the building instead of conveniently in one location.

Leathers said the new third level conference room, which could also be used for catered meals, would be redesigned to enhance the experience with views of the ice rink and downtown Jamestown. The new third floor layout would also include office space for National Comedy Center employees, who would lease the space from arena officials. The potential project also includes the National Comedy Center leasing space for a gift shop on the first floor.

In other Planning Commission business, the commission approved the site plan for the new single-story addition to the Arts and Sciences Building located at Jamestown Community College.