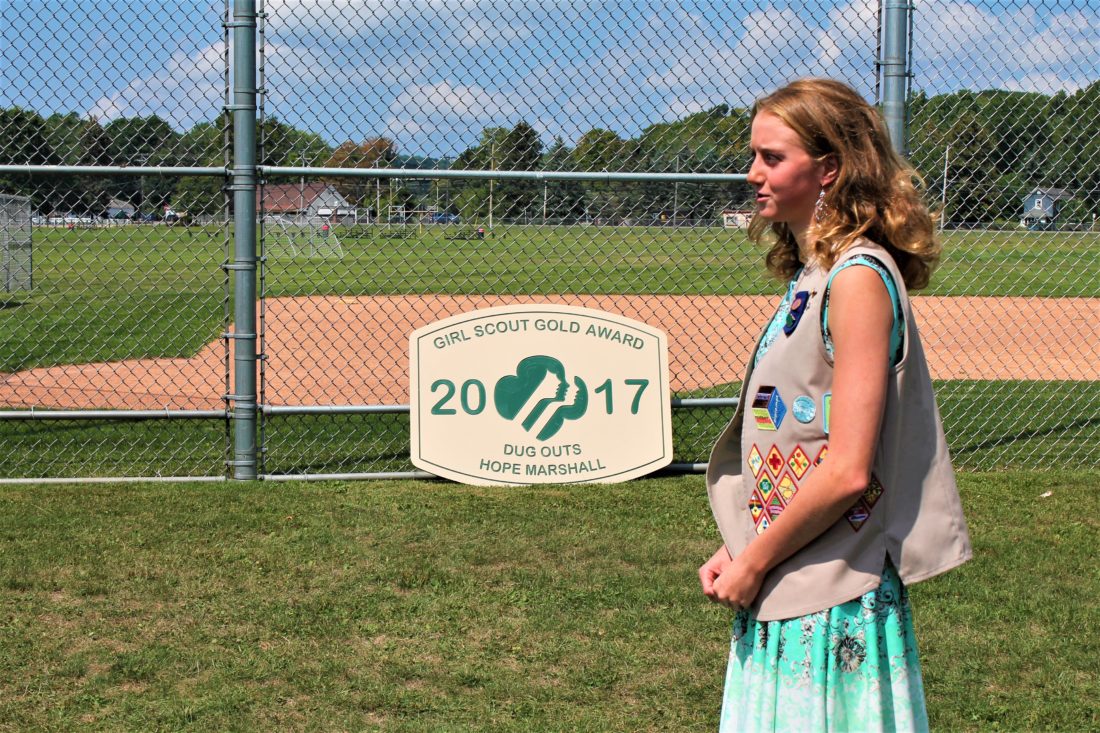 ELLERY — Inside the town of Ellery Park, a humbled group of community members and community officials gathered to acknowledge three accomplishments.

The first was to dedicate and acknowledge the completion of the Pavilion No. 2 that state Sen. Cathy Young had helped generate funding for.

“We have thousands of families — thousands of people — who come here every single year and it is phenomenal,” Young said of the new pavilion and the park in general.

The second accomplishment was the hard work of Girl Scout Hope Marshall. Her relentless volunteer work helped raise $4,846.18 to bring dugouts to the girls’ softball field. Marshall, because of her hard work, received the Gold Award. The third accomplishment was Ellery Town Clerk Rebecca Haines receiving a distinction as a Certified Town Official through the Association of Towns of the State of New York.

Assemblyman Andy Goodell was on-hand to acknowledge all three accomplishments and had nothing but praise for the pavilion, as well as the work that was done by Marshall and Haines.

“Congratulations as well to Rebecca, the first certified county clerk in the state of New York; a special designation,” Goodell said.

Haines is in her 37th year as the town clerk for the town of Ellery. Haines completed 33 education credits across 11 different towns. These credits could be earned by participating in various training exercises in each different township with varying subject matter. The Certified Town Official Program was created in 2014 and Haines now becomes the first in New York state to receive this particular honor.

Goodell then talked about the extensive work that went into making the Town of Ellery Park what it is today. Goodell, a former Ellery resident, reminisced when the park was just an overgrown field.

“Many of you know that I was raised in the Town of Ellery,” Goodell began. “And so, I’ve passed by this land so many times it’s hard to imagine and some of you may still remember when it used to be filled with flowers, it was gorgeous.”

He then recalled Town Supervisor Arden Johnson first bringing up the idea to turn the overgrown field into a park. Needless to say, Goodell had some doubts.

“So, here we are today,” Goodell said. “What a phenomenally beautiful pavilion, don’t you think? I mean look at that ceiling. When was the last time you were in a town park that looked like this? I mean, this is unbelievable.”

Goodell praised the hard work of town officials and workers on the tremendous job they did.

“Congratulations for taking a vision of what you can do with a vacant piece land and turn it into an incredible community asset that everyone can be proud of. What an accomplishment,” Goodell said.

Goodell then shifted his focus to Marshall. He praised the enormous work that she put into seeing that new dugouts for the softball field in Ellery Park came to fruition.

“When you get the Gold Award, which very few Girl Scouts achieve at that level, it’s a statement to everyone that meets you to what kind of person you are in terms of leadership, perseverance, ability, background and you are going to make a really positive difference in every area that you are and in every community,” Goodell said. So, for the whole community we’re rejoicing for your accomplishments and we are looking forward for great things in your future, congratulations.”

Marshall was given the Gold Award by Johnson and then took the podium to say a few words. Included in her speech, was the acknowledgment that she had a lot of help along the way and even thanked her parents for all of their help.

“From the very beginning, I’ve dreamt of the day that I could stand here and say, ‘yeah I did this,'” Marshall said.

She then detailed the enormity of her accomplishment included Marshall’s work of 80 hours of community service.

Marshall realized that the park needed dugouts after her experience of playing in the park for six years. She kept her idea to work towards bringing dugouts to the park a secret, so that no one else could accomplish this before her, she was determined.

“These amazing young girls deserve it,” Marshall said of the dugouts. “I hope they enjoy them for years to come.”

The new softball dugouts and the new pavilion can be seen at the Town of Ellery Park.