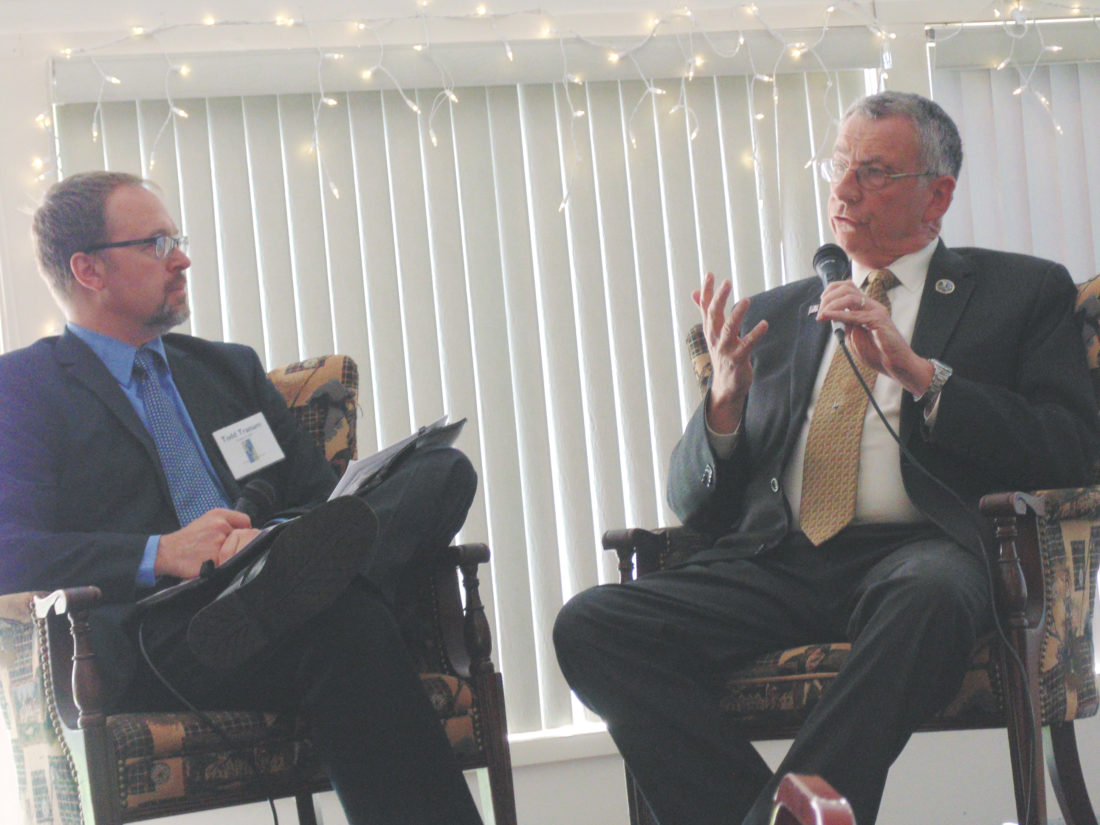 MAYVILLE — All arrows are pointing in the right direction for County Executive Vince Horrigan as he looks out at Chautauqua County.

Property taxes are 41 cents below the Western New York average, he said, while a county structural deficit has shrunk to a manageable level.

But Horrigan told attendees at the Chamber of Commerce’s County Executive Breakfast on Friday in Mayville that some big challenges remain, including population growth, combating the opioid epidemic and slicing layers of local government.

Six months remain before Horrigan exits office and a new county executive enters. Looking back, Horrigan said he has a lot of optimism and pride in the accomplishments made within the county, including more outpatient beds to assist addicts and continued growth in tourism.

He credited the success to community leaders, local governments and county officials.

“It takes good people who are out there that see the vision and know where we need to go and are willing to put a positive attitude on it,” he said. “We will have even more success as we confront the challenges ahead.”

Horrigan acknowledged the opioid epidemic as one of the more difficult issues he’s had to deal with during his time in office. Horrigan said the drug problem is complex as it’s affected many people locally.

“That’s the thing that’s so disappointing,” he said. “We work at it.”

The sale of the County Home in Dunkirk was also a difficult issue for Horrigan to confront. He said the sale was the right move to make as it freed the county from a financial deficit. If they didn’t tackle the issue, Horrigan said the county was headed to a state of financial distress.

“The facility is doing extremely well,” he said. “They have not raised their rates. Everything that ownership said they would do they have done.”

The county executive said he’s encouraged to see momentum on the government restructuring front and is hopeful the county can secure a $20 million award as part of the state’s Municipal Consolidation and Government Efficiency Competition. Ten projects comprise the county’s application to the state. Twenty-three local governments and Chautauqua County are part of the application.

Horrigan said there’s too many layers of government and organizations including fire departments and schools.

“How can we create more structure where there’s more collaboration and more sharing. That’s what we need to do,” he said. “You can’t sustain 44 governments. We have 42 fire departments. They all have to find their own volunteers. We have to come together to form districts.”

Horrigan said he’ll stay connected and continue to help out in any way possible once he retires. Horrigan acknowledged the quality of candidates, Mike Ferguson and George Borrello, who are looking to succeed him in office.

“I love this county. I’m passionate about this county,” he said. “I’m not going anywhere. I will continue to be available to those who think I can help in some way.”