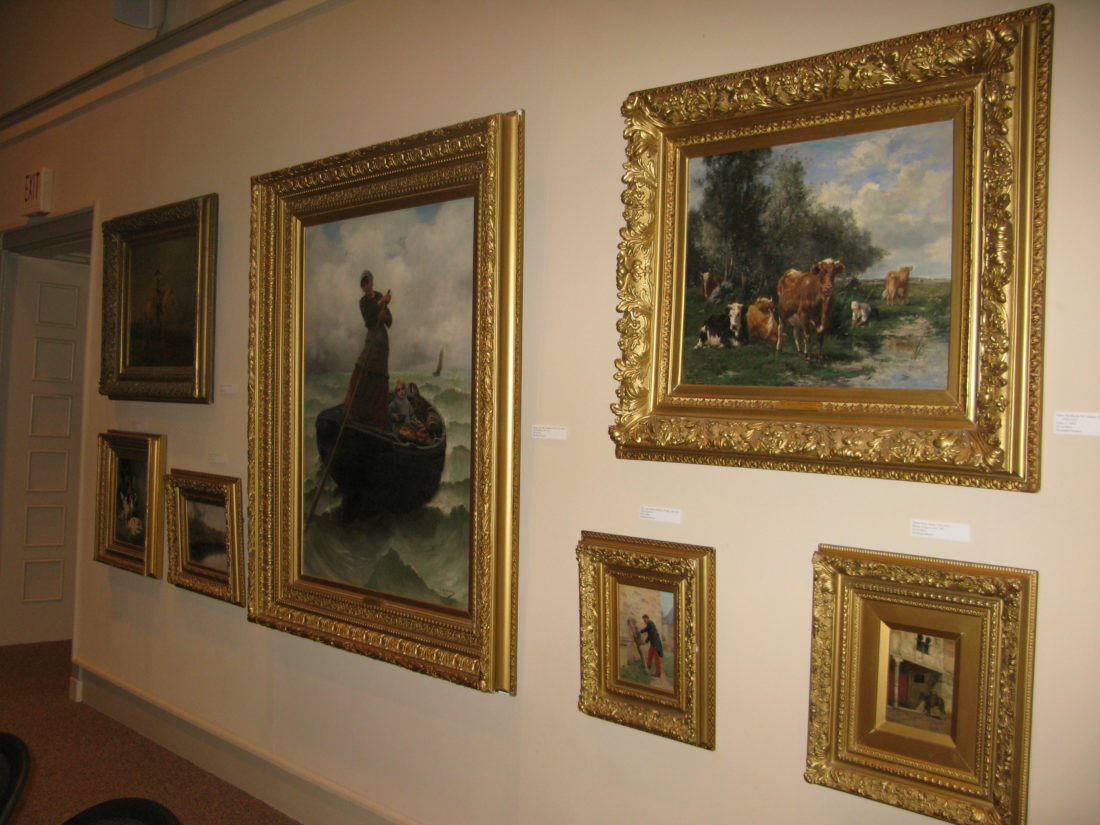 A few of the oil paintings hanging in the Fireplace Room at the James Prendergast Library, located at 509 Cherry St. The library board has decided to once again sell some of the artwork, which is valued at more than $1 million. P-J photo by Gavin Paterniti

The James Prendergast Library Board of Trustees will once again look to sell artwork that is valued at more than $1 million.

On Wednesday, the board approved an agreement with the state Attorney General’s Office to hire a qualified auction house to sell some of the oil paintings in the library’s art collection. R. Thomas Rankin, library board president, said the deal with the Attorney General’s office stems from the petition filed Sept. 16, 2015, by the James Prendergast Library Association with 8th Judicial District Surrogate Court Judge Stephen Cass. At the time, library officials filed the petition to obtain legal approval to sell art housed at the library.

Rankin said the litigation to gain approval to sell the art had been tied up in court for more than a year when the court suggested that the assistant attorney general, library officials and the judge meet to come to a solution they all could accept.

“The resolution the attorney general consented to for the sale of the art collection by the library was under one condition and that was if we go to an auction house who can handle the size and value of the art collection,” Rankin said. “The board accepted the proposal and we authorized our attorney to sign on our behalf.”

Rankin said the agreement with the state Attorney General’s Office is the final authorization the library board needs to proceed with the sale. In August 2015, the library board had passed a resolution to hire Sotheby’s of New York to handle the auction. However, with almost two years passing since that agreement, Rankin said they will be seeking a new deal with a reputable auction house.

“That particular agreement made in 2015 never came to a conclusion,” Rankin said about the Sotheby’s deal. “At this point, we are talking with auction houses, we cannot go into specifics today, and we are looking at a new agreement to handle the sale.”

In 2015, between August and December, library officials discussed the potential art auction of oil paintings from the Mary Prendergast will and estate with the proceeds going toward the library’s endowment fund to pay for operation expenses. Following the board’s decision to hire the auction house, a local group started a Facebook page in September 2015 entitled ”Save Local Art.” The Facebook group expressed their desire to see the artworks remain in Jamestown, while urging the library board to consider other cost-saving measures.

In December 2015, the library board approved a resolution to not sell any of the art for 12 months. The board approved a proposal from Jesse and Cathy Marion of Houston, Texas, that they would not auction any of the oil paintings from the Prendergast will or estate or from the Packard family in exchange for $60,000 in 2016.

Rankin said, in December 2015, library officials would focus their attention in 2016, with the help of the Marions and the art community, on finding community-minded individuals or organizations that would want to buy the oil painting collection to keep it in Jamestown.

Rankin said Thursday to The Post-Journal that the deal with the Marions was completed at the end of 2016, and that there was no deal for 2017.

“There was a possibility (of a deal) for 2017. The Marions had an option, but did not elect to enforce it,” Rankin said.

“No person, group or entity in Chautauqua County ever approached the library about buying the collection,” Rankin said.

Tina Scott, library executive director, said the artwork was estimated to be worth $1.2 million-$1.6 million in 2015. She said, once again, the library board will not be selling any Prendergast family portraits or any Roger Tory Peterson’s prints