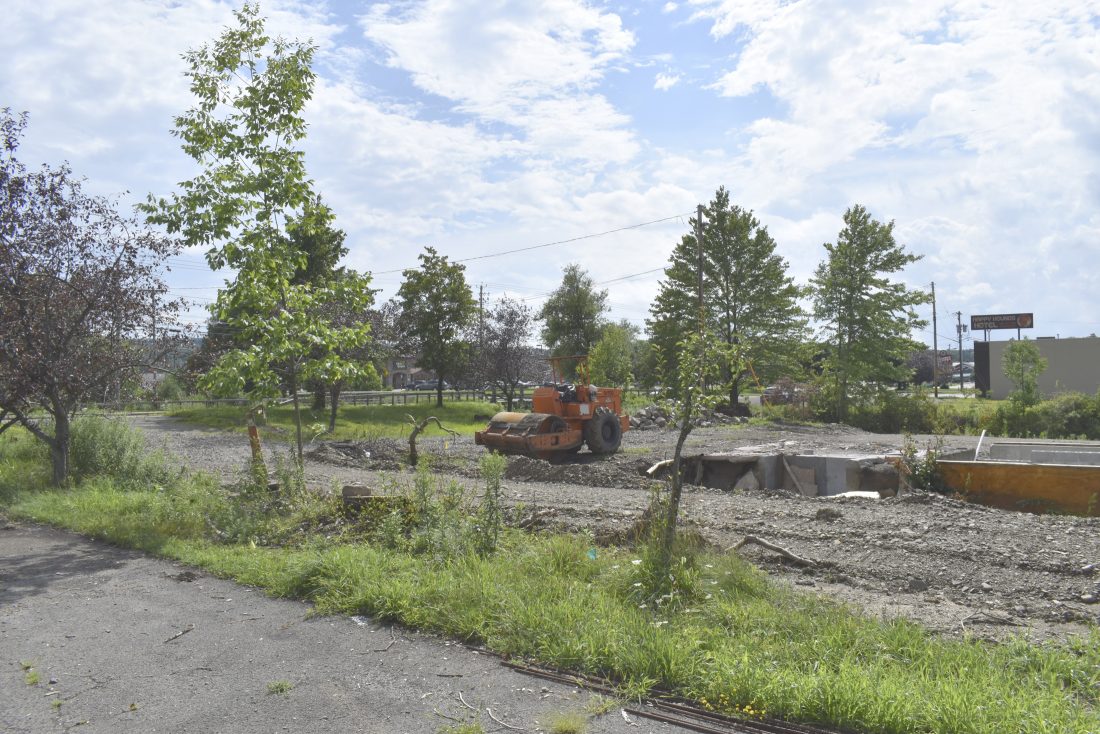 The Lakewood board will hold two public hearings at its next meeting on Aug. 10 to discuss the construction of an office building at 341-343 E. Fairmount Ave. and alcohol sales at Luxe Nail Salon at 279 E. Fairmount Ave. P-J photo by Jay Young

LAKEWOOD–The Lakewood Board of Trustees will hold a pair of public hearings at its next regular meeting on Aug. 10, with the first covering the potential construction of a new office building at 341-343 E. Fairmount Ave.

At 6:45 p.m. the board will hold a hearing on a site plan review submitted by Lori Thierfeldt of Madmar Development Corp. for the construction of a new office building on East Fairmount.

The site was formerly a karate studio, which was recently demolished. At 6:50 a public hearing will be held regarding a special use permit for Luxe Nail Salon of 279 E. Fairmount Ave. to serve alcohol.

The board discussed several matters related to the potential transfer of village property, including a previously tabled discussion regarding paper streets along Midcrest Avenue and Gordon Avenue.

The village has been approached by homeowners wishing to purchase paper streets, and discussed the process with village attorney John Lamancuso. Before streets can be sold to homeowners, the sites would need to be surveyed and appraised before transfer documents could be drafted.

Trustee Ted McCague expressed a desire to directly discuss purchase prices with the prospective buyers before spending more village funds on the process.

McCague mentioned that there could be some future disagreement about the price of the properties, and also their use after being transferred.

“A lot of people don’t understand this. We came across this a lot on the planning board,” McCague said. “The property, because it has a utility under there, a utility right-of-way, is always subject to the utility or the village entering in there to repair or replace or maintain that line. That means that you shouldn’t put up a fence, you shouldn’t build on it, because if you do they can tear it down in order to maintain the line.”

The board passed a motion to get an opinion on the value of the paper streets as a next step.

Paper streets along Harlem Avenue and Glenwood Avenue were also tabled for abandonment approval to the Lakewood Fire Company. The board was prepared to vote on that matter before McCague raised questions about the process and the benefits of such actions to the village.

Paper streets like Pleasantview and Glenwood have previously been abandoned to the Fire Company near its training facility off of E. Summit Street It was proposed that Harlem and Glenwood also be abandoned as the properties presumably offered no value to the village.

After hearing McCague’s concerns, the board agreed to table the abandonment of the streets until speaking with Lamancuso.

In other business, Mayor Randy Holcomb offered an update on the veterans memorial plaque, which will be put in place at the Lakewood Veterans Park between Summit and West Terrace avenues, thanks to the work of Village Historian Susan Lane, Department of Public Works Supervisor Tom Pilling, and Trustee Rich Fischer.

Jamestown Bronze Works aided the manufacture of the plaque.