Wondering What Happened To Classmates 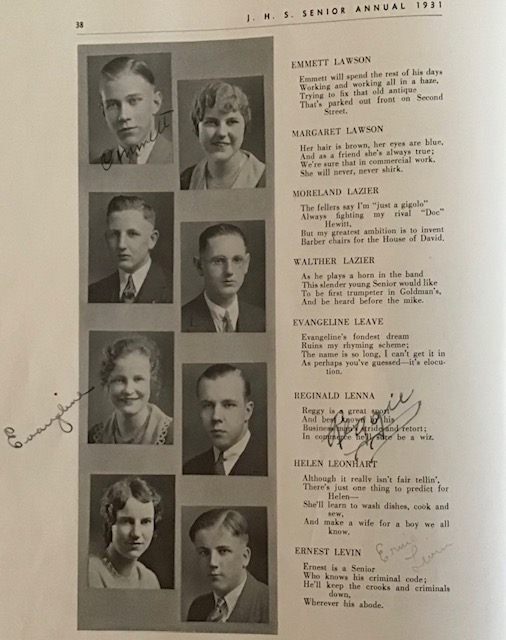 Have you every wondered what happened to that quiet kid in the back corner of the classroom during high school or the math whiz kid of your class or the girl you had a crush on who moved away in your junior year?

When a donation of a yearbook arrived at the Research Center of the Fenton History Center while I was working there, I began wondering if some of the “prophecies” in the yearbook actually came true after leaving high school. The yearbook was for the class of 1931 at Jamestown High school. What caught my attention was all the notes written in the book along with newspaper clippings. The owner of the yearbook had recorded classmates’ marriages, deaths, and other tidbits about these classmates over 70 years — yes, 70 years! This yearbook was donated after the 70th class reunion. As I was looking at it I started reading some of the four lines written about each senior next to their photograph. Some included a “prophecy” of what that person would be doing later in life. I wondered just how accurate the few words were about the person and their future.

This class included people who became well known within the community and others who, I discovered, did go on to fulfill the “prophecies.” I always thought it would be fun to do some research into this class and see who followed the path “expected” of them. With the Research Center closed now, I could not access that fact-filled yearbook. I have a yearbook from that class in my home library so I decided to take a look using the resources I can access at home.

One of the people I recognized as becoming well-known in the community was Reginald Lenna. His four lines were: “Reggy is a great sport, And best known by his, Business man’s stride and retort; In commerce he’ll sure be a wiz.” He continued in his father’s footsteps, working his way up to president in the Blackstone Corporation. His business success has benefited the Jamestown community in a number of ways.

Another person in that class was Stanley Weeks. His four lines were “Stan is the Scotchman of the mass, When dressed in kilts, he sure is class. He wants to be either doctor or lawyer, He’s slated for boss like Tom Sawyer.” He did become a lawyer in Jamestown but also served Jamestown as mayor in the 1950s. With his wife Sarita, he became involved in many activities and events in the Jamestown area and their successes benefited the community in many ways.

One other person who may be remembered by some of our readers is Ernest Levin. His four lines were: “Ernest is a Senior, Who knows his criminal code; He’ll keep the crooks and criminals down, Wherever his abode.”

Ernest was a teacher who eventually came back to Jamestown, teaching at Jefferson Junior High, and was a vice-principal at Jamestown High School. After teaching, his life became what those four lines alluded to, while he dispensed justice as the town justice for the Town of Busti. He also, in one way or another, had an influence on many residents of this area.

What is interesting is that the writers of these prophecies seemed to expect, at least some people, to follow in their father’s or mother’s footsteps. Some did as the three above. Reginald “Reggy” continued his father’s business, Stanley served Jamestown as a mayor as did his father, and Ernest continued with law enforcement as his father had been the County Sheriff and Jamestown’s Chief of Police.

Others we know did not follow their father or their mother. Aviation was relatively new in 1931 and a number of the graduates had aviation mentioned in their four lines. Some of them did go on to aviation connected careers, if not pilots. Many of the four lines for the young ladies in the class included the expected nurse, teacher, and secretary, but some included designer, artist, poet, and reporter. Many are hard to follow since marriage changed their names. Having access to that donated yearbook should help to follow some of those graduates.

This may become an ongoing project as more resources become available at the Research Center. This class faced the deepening depression of the 1930s as they found their place in the adult world. Undoubtably a number of plans and dreams were changed because of the depression and later the shadows of war in Europe. At the same time new technologies such as radio, electronics, aviation, and automobiles were open to those who wanted a new challenge. One field not even known much about, created the opportunity for one of the class mates to be part of the crew that armed one of the atomic bombs which were dropped on Japan to end World War II. There are many more stories to come out of the Class of 1931.