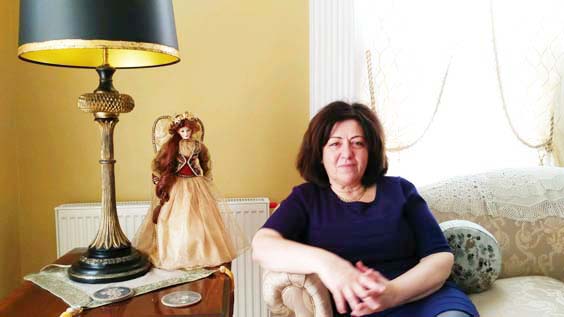 Dr. Athanasia Landis said the county is wasting time when it should be preparing for the virus. Photo by M.J. Stafford

Seven weeks before the United States of America began to take the coronavirus seriously, it was becoming a major topic in one Fredonia household. Dr. Athanasia Landis and her husband, Andrew — also a doctor — were taking notice of the events occurring in China and Italy.

COVID-19 was no ordinary illness. It was taking lives at a rapid pace while coming closer each day to our nation.

“This is going to be a huge problem,” Landis recalls telling her husband. “It’s going to hit New York City very quickly and the whole United States … and he agreed with me. I thought it was very logical.”

Landis, who lost her re-election bid to current Mayor Douglas Essek in November, wishes her premonitions about this disease were wrong. With her family working in the medical profession, including a daughter who is completing a residency in one of the hot spots where the virus is located downstate in Westchester County, there is a major concern they will not be “100 percent safe.”

She also has great concern for Chautauqua County and Western New York. During one of his daily briefings last weekend, Gov. Andrew Cuomo noted the virus that is dominating life while overwhelming hospitals in New York City will soon take a greater toll on upstate New York.

How well prepared will we be?

Look no further than Erie County, which already seems to be nearing a breaking point. First responders have been infected by the virus while health-care facilities are near — if not over — capacity.

Chautauqua County, which had its first confirmed cases on March 23, has yet to see the major impact that is also being seen in the major metropolitan areas. If we are lucky it may not come.

But that attitude is what may have led America, and even New York state to an extent, to fall behind when battling a pandemic. According to Landis, precious moments are being lost by this county and its health-care facilities.

“There’s not a medical person on the planet who will tell you that we acted fast enough,” she said. “We did not. We are where we are.”

On Wednesday, the OBSERVER and The Post-Journal revealed the three major hospitals in this county are likely to have access to about 20 ventilators. While those who work at the health-care facilities said that number is “adequate,” there are many others who disagree.

Landis is one of them.

By her count, Brooks Memorial Hospital in Dunkirk alone serves a population of 25,000 to 30,000 residents from Silver Creek to Brocton and includes the larger population centers of Dunkirk and Fredonia. By the Center of Disease Control estimates, 40% to 70% of the population will be touched by this illness.

In a rural area, Landis said, it is likely to be less — and more in the range of 25%. Of those potential 6,000 residents, 20% will need to be hospitalized while an even smaller percentage — about 2% — will need to be on ventilators.

By those projections — a possible worst-case scenario — residents needing to have hospital beds could reach 1,200 people with another 120 needing a ventilator. At this moment, we are nowhere near ready for this catastrophic event.

“This is something that is very difficult to be prepared for,” she said. “But why we have wasted all this time and not put … it into some kind of order?”

Even with two other health-care facilities in Jamestown and Westfield, those figures are intimidating. At Brooks alone, it has upped capacity to 45 beds.

That may not be enough.

During a phone interview Wednesday, Landis had been watching Cuomo’s daily briefing. She has high praise for the governor’s views and quick actions. “Nobody is talking except him,” she said while pleading for local officials to offer more information. “Panic doesn’t come when people know what’s going on. It comes from the opposite. … I think what the governor does is excellent actually. Be totally open with the people and then explain the problems.”

She also says county officials need to do more than just remind the public of the daily list: wash their hands, do not go out if they are sick, avoid touching their face; cover their coughs or sneezes, avoid close contact with others and clean and disinfect objects and surfaces. “They have to stop being defensive every time somebody asks a question,” she said. “People need to know what is going on. This is their most important obligation.”

One place where Chautauqua County could begin showing leadership is by pushing to open Lakeshore Hospital, which closed on Feb. 2. Landis said efforts could already be underway to do a deep cleaning of the facility and the rooms. In addition, beds would have to be added to the campus.

But looking across the state, specifically New York City, there’s no telling what our county of 128,500 people could be facing. “This is a life and death situation,” Landis said. “I think the county governments, the local governments and hospitals are hoping for the best.”

Her questions at this point include: Are local hospitals ready? Do they have enough beds and supplies? Is space being allocated for special rooms in dealing with the virus? Have specific personnel been assigned to those COVID-19 areas? How about personal protective equipment and soap? What if they run out of vital materials?

Her final question is perhaps the most worrisome. “What is the back-up plan?”

As health-care professionals here battle the virus, there will be other medical issues they will be facing as well. Heart attacks, strokes and other ailments do not take days off.

“I pray every night,” she said. “I’m scared to death. But wishing and praying are not enough.”

John D’Agostino is the OBSERVER publisher. Send comments to jdagostino@observertoday.com or call 366-3000, ext. 401.