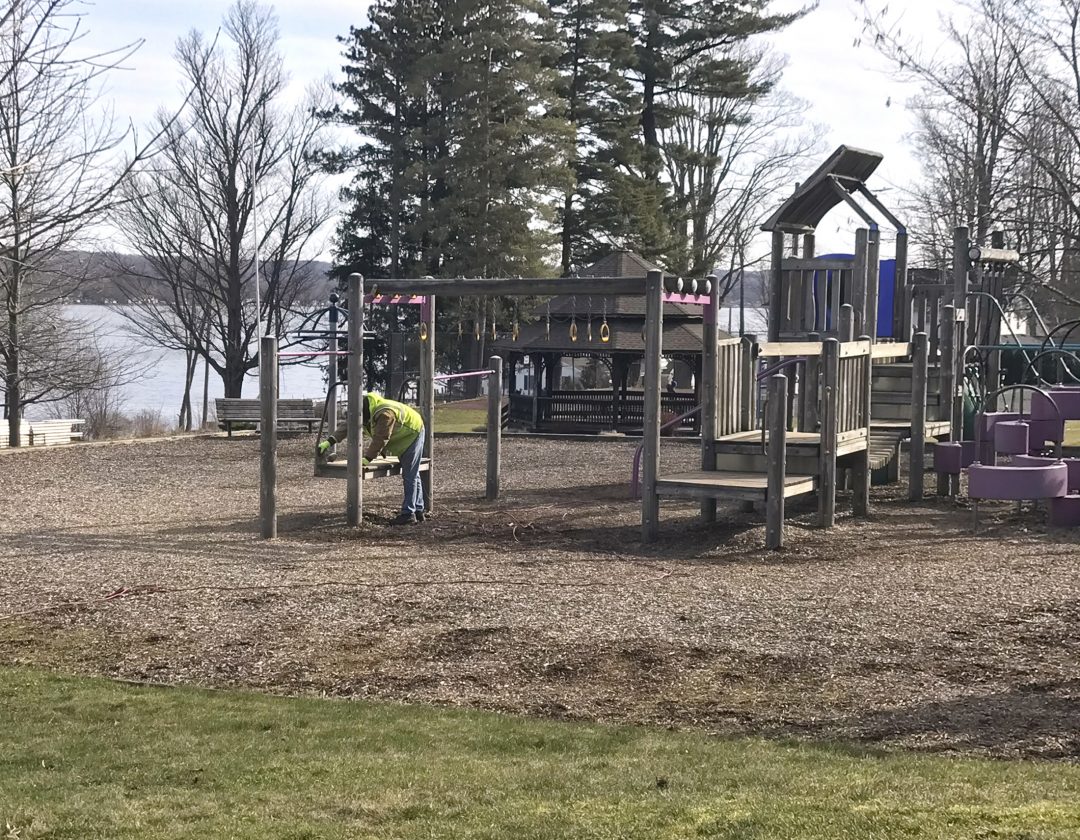 LAKEWOOD — An investigation into vandalism at the Richard O. Hartley Park and Packard Estates is ongoing.

Lakewood Mayor Randy Holcomb said Monday that the Lakewood-Busti Police Department and Chief John Bentley are still in the process of gathering information about the vandalism, which involved spray-painted obscenities and graffiti.

“The police department is on top of it and they are investigating as quick as they learned it happened,” Holcomb said. “That was Saturday morning, was when it was discovered and they were right on it. I talked with Chief Bentley and he assured me they are taking every step they can to find out who caused this. Just a darn shame that something like that has to happen.”

Holcomb said that village maintenance workers were still in the process of cleaning the damage, and noted that some of the graffiti was not on village property.

“They are getting rid of it as best they can, some of it is not on village property. I’m not certain what (the private property owner’s) reaction will be but I am sure they are working on it as well,” Holcomb said.

The Lakewood board recently discussed replacing the playground equipment at Hartley Park, but did not discuss adding security measures or cameras.

“It’s not been discussed since I have been on the village board even, however talking with Chief Bentley he said cameras have been discussed in the past,” Holcomb said. “I believe after this they will probably be discussed in the future, especially after the new playground is discussed by the board of trustees. I’m sure that will be a part of our future conversations.”

Residents were concerned about the vandalism, but some were finding ways to use the unfortunate event as positive motivation.

“I have kids, my son goes to preschool and they play down there frequently. I was extremely angry,” said Bob Lingle, owner of Off the Beaten Path bookstore. “As somebody who tries to be more of a leader in the community, I was just encouraging people to not– obviously you’re going to be angry but try to use this as motivation to do something positive in the community. Whether it be try to help clean up the playground, clean up the liter and stuff on the sidewalk, just pick up and volunteer. Use that angry energy towards doing something more positive in the community rather than just commenting on social media about how angry you are.”

Lingle had also posted a message to his customers about the vandalism on the store’s Facebook page.

One Lakewood resident using the park on Monday commented on the possibility of adding cameras as part of the proposed improvements.

“I think as part of the improvements of the park maybe one of the things they need to look at is maybe, potentially if they are going to put that kind of investment in it, put like a CCTV system or something in,” the woman said. “If you want to make that investment you need to protect it, not saying that would necessarily stop it. It would be nice to always send a message, if somebody did do something like that that you could actually catch them.”

Some of the graffiti mentioned the recent coronavirus pandemic, according to the resident, raising questions about the motivations of the vandal or vandals.

“I think it is more around the lines of, I think we are in a really uncertain time right now and a lot of people are really upset about things,” said the resident. “I think people are acting out, reacting in any way that they can. I really do think that is what it is. We are in a very interesting and very volatile time. Uncertainty causes people to do lots of strange things. Anything that they can do where they feel like they might be able to make a statement, or have some sort of control of a situation. I think that’s the kind of actions that you sometimes kind of see out of that. It’s not different than the fact of everybody going to Walmart and trying to buy out the toilet paper, right? That is something people can control and it makes them feel safe.”